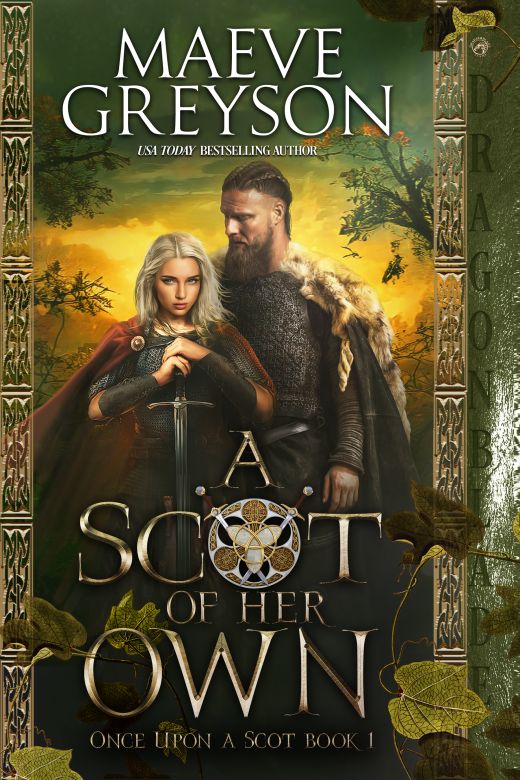 Fire and ice. Powerful forces on their own. Combined? Invincible passion.When mighty Thorburn MacDougall, commander of the Lord of Argyll’s warriors, overpowers the canniest Norwegian he’s ever battled, he rips off the man’s helm to savor the look of horror right before delivering the killing blow. But the canny Norwegian isn’t a man at all. She’s a blue-eyed beauty with fire in her eyes and fury in her soul.Adellis Bjørnsdóttir weighed the risks and found them worth it. Freedom. At any cost. The only other escape is death, and she’s not ready to give up yet. But the Gallóglaigh warrior, the fearsome Scottish bear she allows to capture her, isn’t the cruel tyrant she thought to endure long enough to secure safe passage to Scotland. He’s protective. Considerate. Stubborn as an ox. And entirely too tempting.Honor. Chivalry. Outwitting traitors, murderers, and old enemies? All easy enough. But trusting? Finding the courage to love? Therein lies the challenge.Note: This series is part of Dragonblade's Flame line, so this is a sexy, steamy, and scorching-hot read with multiple sex scenes. Be advised.Once Upon a ScottA Scot of Her OwnA Scot to Have & To HoldA Scot to Love & Protect

“Seven feckin’ years since the treaty. Do they live for nothing but battle?”

“As we do?” Thorburn MacDougall shot a warning glare at his brother. Ross knew better than to natter on like a spoiled bairn while tracking the enemy. With a hard shove of his shield, he pointed them all toward the last known location of the rebellious Northmen.

“We are different from them,” Ross argued in a good-natured whisper. “A silver groat a day leases my battle axe for any wee skirmishes needed. ’Tis an occupation. No’ an obsession.”

Valan, youngest of the three MacDougall brothers, snorted. “A silver groat all the wenches ye can bed, aye?”

“Enough!” Thorburn strained to keep his voice down. “I will have quiet or it’s the whipping post for both of ye, ye ken?” He doled out another quelling look to ensure they understood he meant it. As constable of the Lord of Argyll’s Gallóglaigh warriors, he maintained the strictest discipline, and did not exclude kin. If these two foiled this campaign, he’d order them whipped until they begged forgiveness for their lack of self-control.

Although he commanded hundreds, only a few of his best crept alongside him into the edge of the forest. Six warriors, including himself and his brothers. All assisted by their weaponry knaves. Spies had reported the rogue Norwegians numbered at naught but two and twenty. Six mighty Gallóglaigh could easily best that few. The last band of rebels had been well over a hundred, infesting the northeastern woodlands of Mull like lice on a priest. Twoscore of his men had ousted that lot with little effort. Attacked and made it back to Duart in time to enjoy a celebratory feast after a mere four days.

“Shields!” Thorburn bellowed, shoving his upward. He hated shields. Sword, axe, spear, arrow. Aye, those were fine weapons indeed. Not a bloody shield to cower behind. But the last time they met with King Magnus’s traitors, archers in the trees had been an unavoidable annoyance, so shields it was. Without taking his focus off the trees up ahead, he reached behind him. “Spear!”

The shaft of the weapon smacked into his outstretched hand as if placed there by some mystical force. He hurled it with a guttural roar, then gave a satisfied jerk of his chin. His target cried out and tumbled from their perch high in the branches.

“The first of many,” his weaponry knave, called out. Tasgall enjoyed keeping tally, and Thorburn didn’t mind. At least it taught the lad his numbers.

Another volley of arrows followed. An artful shot caught him in the shoulder, piercing through the mesh of his hauberk. He reached back, snapped off the shaft, and threw it aside. Hendry, his provision knave, would remove the rest later. The haft of his sword slapped into his palm without his even asking. Tasgall knew his preference in weapons.

“End this!” Thorburn ordered, then unleashed a bloodcurdling war cry signaling a full on charge.

Shields raised; they rushed the trees to flush the archers from their roosts. Thorburn stormed deeper into the woods. Bowmen were always the first line. He wanted the rest, those waiting to battle him hand to hand.

A lone Northman stepped into his path.

Slight of build and a full head shorter, his opponent appeared less than fearsome. But then the man sprang forward, swinging both axe and sword with enough agility and skill to make up for his diminutive stature.

The longer Thorburn parried and fought the irritating churl, the less amused he became. Every move, every thrust, the agile Northman countered it, adjusted defense, then skittered out of reach like a leaf riding the wind. It was as though the fiend enshrouded in that strange bascinet knew his every move before he took it. Eyes glittering like ice, the man made naught a sound. Not even a grunt. His helm’s elaborate visor and camail hid his features. It was like fighting a faceless wraith that darted in and out among the trees like a vengeful spirit of the wood.

An upward swipe of his foe’s blade nicked Thorburn’s chin. The sting of the cut yanked him free of the demon’s bemusing spell, scolding him like a mother’s slap. He would nay let his mind wander again. ’Twas becoming more than a little obvious that his hulking size hindered more than helped in this tight forest terrain. A tactical error on his part. He had also allowed a vainglorious attitude to trick him into underestimating this opponent. Such an error in judgement would not happen again.

A felled tree, small and partially hidden by vines, caught his eye and prompted a plan. He veered to the left, matching the sidestep with a mighty swing of his sword. A calculated swipe. Not meant to maim or injure but herd his adversary into a trap. Nay, he would not end this fiend just yet. Instead, he would topple the unsuspecting fool and rip off his helm before delivering the killing blow. He hungered to see fear etched on this man’s face. Yearned to watch the terrifying knowledge of impending death replace the calculating ice in the Northman’s clear blue eyes.

Again, the devil thwarted his plan, leaping across the obstacle with the agility of a deer.

Thorburn longed to roar out his rage, but he would not give the lout that satisfaction. Nay, he knew better than to let emotions lead him into foolhardy moves. But he would allow his fury to fuel a charge into the clearing up ahead. Time to take the safety of the trees away from this insolent wretch.

The small warrior did his best to avoid the open area, but Thorburn wouldn’t allow it. The forest had thinned enough to do what he loved best. Rid himself of that accursed shield. With a rapid-fire punching throw, he hurled the weighty disk of metal and wood. It hit the Northman with enough force to launch him well into the clearing. The wee demon landed hard, flat of his back, right where Thorburn wanted him. Now he allowed himself a victorious roar as he thundered forward to claim his prey.

An impressive crease in the metal chest plate attached to his opponent’s chain mail revealed where the shield had hit. The sound of strained wheezing behind the man’s visor confirmed it.

“Allow me to end yer misery for ye.” Thorburn unsheathed his dagger, planted a knee on the devil’s heaving chest, then ripped off the man’s helm and froze.

“Well?” The captivating woman made a defiant upward jerk of her chin. “Do it!” The frost in her icy blue eyes had disappeared. Fury and fire flashed like lightning in their depths. “Do it, feiging!”