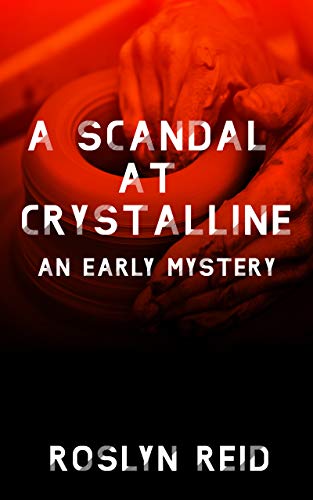 Chandler Hammond's wife says he and his hot Iraqi girlfriend skipped out of their Maine town of Finderne with his company's millions. But his sister thinks his wife murdered him and hires African-American detective James Early and his teenage son Tikki to find the truth. A Scandal at Crystalline follows them through an intriguing maze of unexpected encounters: financial shenanigans, two beautiful women who were sleeping with each other (and with Chandler Hammond), a police psychic, and a runaway kid in a remote mountain cabin. But things turn dark when their investigation forces them to consider the unimaginable—the sinister side of raku pottery.

He gave the safe a last going-over but the single shelf was as empty as a roadside beer bottle. He rapped his knuckles against the safe’s back wall and heard the ring of solid steel. No concealed compartment there. He swept the light beam over the safe’s floor, which was also barren, then dropped and crawled inside. At the very back, he found a
sizeable object covered by a blanket. He pulled the blanket off to reveal a large cooler.

What the hell? In a case full of oddities here was another one. Why stash a cooler in a safe? Beer wasn’t that expensive. Maybe Hammond was trying to keep the hired help
from dipping into his pricey liquor but anybody living in a place like this could afford a liquor locker. Maybe Hammond liked really cold cash.

After much grunting, tugging, and cussing, Early had to admit the cooler was too heavy for him to move. Then he noticed a bit of clearance between the cooler and the shelf
above it. He placed his flashlight into his mouth, raised the lid as far as he could, and slid his hand inside. Something under his fingers felt smooth and cold. An ice slab? Imagine that, ice in a cooler.

He tried grasping the cold object. It was too slippery, but drying his gloved hand on his shirt gave him enough traction to raise it. He slid his hand underneath and heard the
crackling sound of a plastic bag. He squeezed. What he felt was long and lumpy like a . . . finger? Something hard seemed to encircle it. Something in the shape of a ring—

A loud click startled him. Somebody was unlocking the front door.