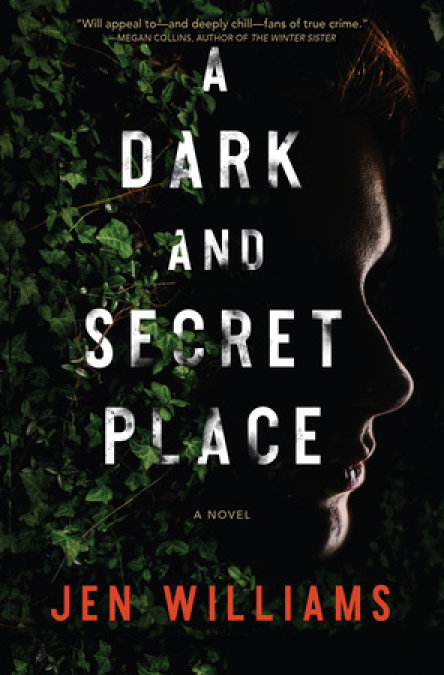 For fans of Kathleen Barber and Julia Heaberlin comes a chilling psychological suspense from award-winning author Jen Williams about a woman who discovers her late mother had a decades-long secret correspondence with a serial killer, begging the question: how well do we know our own family and even ourselves?

When prodigal daughter Heather Evans returns to her family home after her mother's baffling suicide, she makes an alarming discovery--stacks and stacks of carefully preserved letters from notorious serial killer Michael Reave. The "Red Wolf," as he was dubbed by the press, has been in prison for over twenty years, serving a life sentence for the gruesome and ritualistic murders of several women across the country, although he has always protested his innocence. The police have had no reason to listen, yet Heather isn't the only one to have cause to re-examine the murders. The body of a young woman has just been found, dismembered and placed inside a tree, the corpse planted with flowers. Just as the Red Wolf once did.

What did Heather's mother know? Why did she kill herself? And with the monstrous Red Wolf safely locked inside a maximum security prison, who is stalking young women now? Teaming up with DI Ben Parker, Heather hopes to get some answers for herself and for the newest victims of this depraved murderer. Yet to do that, she must speak to Michael Reave herself, and expose herself to truths she may not be ready to face. Something dark is walking in the woods, and it knows her all too well.

LIGHT FROM THE doorway fell across the boy’s face, and for the first time he did not turn away from it. His arms and legs were too heavy, the cuff at his throat too solid, too tight. And it wasn’t as though turning away had ever saved him before.

The figure in the light paused, as if noting this change of habit, then knelt to undo the leather strap with sharp, jerking movements. The cuff fell away and she reached for his head, grasping a thick handful of his black hair, close to the roots.

Years later, he would not be able to say what had been different about that particular time. He was starved and tired, his bones heavy and his flesh bruised, and he had thought that every inch of him was resigned to the reality of his existence, but that time, when her fingers twisted in his hair and her fingernails scraped against his scalp, something in him woke up.

“You little brute,” she said absently. She filled the cupboard doorway, blocking out most of the light. “You filthy little

brute. You stink, do you know that? Dirty little shit.”

Perhaps at the very last moment she did realize what she had woken, because for the briefest second a flicker of some emotion animated her pale, doughy face; she had caught something in his eyes, perhaps, a look that was alien to her, and he saw quite clearly the panicked glance she gave the cuff.

But it was too late. The boy sprang to his feet, his jaws wide and hands hooked into claws. She leapt backwards, yelling. The landing stairs were directly behind her—he dimly remembered this, from the time before the cupboard—and they went crashing down them together, the boy howling and the woman screaming. It was so brief, that moment of falling, but for years he would remember several sharp impressions: the hot searing pain as she ripped a fistful of hair from his temple, the yawning sensation of falling into space, and the wild delirium of gouging her skin with his claws. His nails.

They hit the floor. There was silence. There was, the boy realized, no one else in the house; no raised voices, no sharp fingers, no alarming flash of red. The woman, his mother, lay underneath him in a collection of strange angles, her throat cocked and bared as though she were trying to appease him. Her right arm had snapped halfway down her forearm, and a bone, shockingly white against her grayish skin, pointed toward the window. The sleeve of the yellow smock she wore was caught on it.

“Muh?”There was a thin stream of blood running from her nose and mouth,

and her eyes—green, like his—were looking at point above his head. Carefully, he put his hand over her mouth and nose, and pressed, watching with fascination as her flesh slid and wrinkled. He pressed harder, leaning his whole weight on his arm, feeling her lips mash against her teeth and split and …

He stopped. He needed to be outside.

It was a cold, gray morning, he guessed autumn. The light hurt his eyes, but not as much as he had been expecting. In fact, he seemed to drink in the light, staring around at the bleak landscape and the sky with a growing sense of peace. There were the woods; he had played in them once, and the leaves were turning brown and red. There were the fields, dark now with recent rain, and there were the old out-buildings his father had let fall into disrepair. Somewhere beyond them, there was a paved road, but it was a long walk. His mother’s body, which he had dragged out onto the scrubby grass with him, looked more beautiful already—away from the house she was something else. Taking hold of her ankles, he dragged her a little further, across the dirt track and into the fallow field opposite.

“Here.” He opened his mouth to say more, but couldn’t. The grass was wet, framing his mother and cushioning her, and he could feel the life of it; tiny flies and beetles, the bright interest of worms. The boy moved so that he was kneeling next to her, and he felt his body fill with an anger that was so flat and so enormous it was like a landscape inside him, a rage

that filled his every horizon. For a time, he came untethered from himself, seeing nothing but that flat, red rage, hearing nothing but thunder. He did not come back to himself until a polite cough from behind him made him jerk with surprise. His arms were bloody to the elbow, and his mouth was thick with the taste of pennies. There were things in his teeth.

“What is this then? What do we have here?”

There was a man in the grass, tall and sharp-angled. He was wearing a hat and he was watching the boy with a kind of gentle curiosity, as though he had come across someone making a kite or playing conkers. The boy went utterly still. The man wasn’t from the house, but that didn’t mean the boy wouldn’t be punished. Of course he would be punished. He looked down to see what he had done to his mother, and the edges of his vision went gray.

“Now then. Don’t take on so.” The man took a step forward, and for the first time the boy saw that he had a dog with him, a huge black dog, covered in shaggy black fur. It steamed slightly in the cold morning air and looked at him with yellow-brown eyes. “You know, I had completely forgotten the Reaves had a boy, but there you are. There you are, after all.”

The boy opened his mouth and closed it again. The Reaves, the Reaves were his family, and they would be angry with him.

“And what a creature you are.” The boy winced, remembering how his mother had called him brute and beast and filth, but the man sounded pleased, and when

he boy looked up, he was shaking his head gently. “You’re to come with me, I think, my little wolf. My little barghest.”

The dog opened its mouth, letting loose a long pink tongue. After a moment it began to lick the blood from the grass.