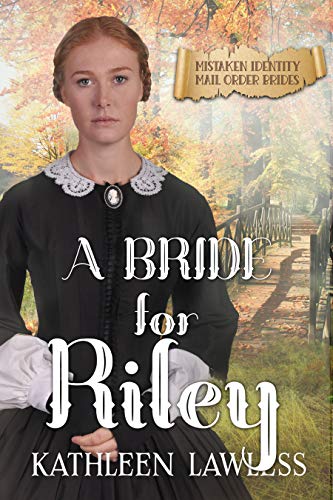 She was on her way to the convent.  How did she wind up married instead?

Raised in an orphanage, Lucinda never felt she truly had the calling to be a nun, secretly longing for her own family. Like a miracle, her prayers are answered when confusion at the train station leads her to the marriage altar instead of the convent.

Riley's sweet young mail-order bride is nothing like she sounded in her letters, but is enthusiastic about his niece and nephew joining their ready-made family.  He enjoys getting to know her as a strike looms at a nearby mine he owns.

Complications ensue when a different woman arrives, claiming to be Riley's intended and threatening to sue him for breach of contract.  One look at his wife's face reveals the truth. He was misled.  Tricked into marriage with the wrong woman.  Riley grows cold, ignoring his heart's insistence that Lucinda truly is the right one for him.

Lucinda is devastated by loss of her husband's trust and affection.  When the trouble-causing newcomer joins forces with Riley's no-good brother-in-law, the pair kidnap the couple's young wards just as strike action escalates and the entire town is under siege.  Unwilling to sit on the sidelines, Lucinda risks everything to save those she loves, and Riley learns the most important lesson of his life.