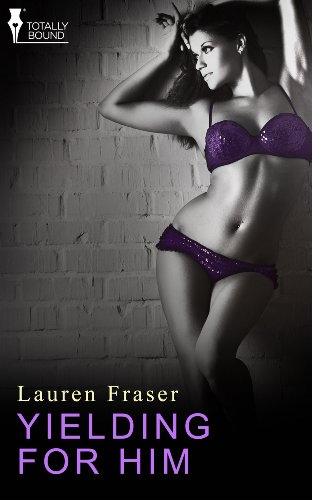 Yielding for Him by Lauren Fraser

Sometimes in order to have it all you have to be willing to risk everything.

Self-made billionaire Donovan James works hard and plays harder. After all life is no fun without risks. But finding a woman who agrees has been more difficult than he'd ever imagined, until now.

Lisa Scott knows how to get what she wants and what she wants is a life with Van. They belong together and she'll do whatever it takes to make him realize it. Including taking him up on his challenge to invite his best friend, Jason, into their bed for one night.

She'll give him his fantasy and in return, hopefully, she'll get hers.


Lauren has always been a dreamer, weaving stories to keep herself entertained. Through her stories she can travel anywhere in the world and money is not an object. Now who wouldn't want that? Unfortunately the demands of the real world pushed her dreams to side for a while.

After talking to her children about going after what they wanted and not letting fear stand in their way, she realized she needed to lead by example and chase her own dreams. She enjoys going hiking, camping and kayaking with her husband and two daughters. Lauren loves to receive reader feedback so fire an email her way.