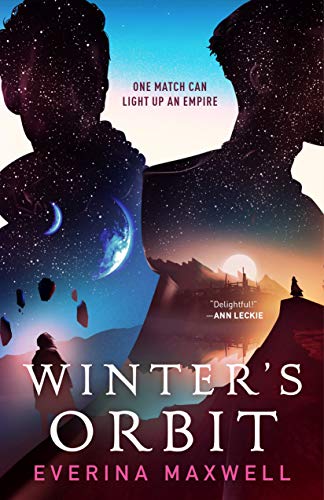 A famously disappointing minor royal and the Emperor's least favorite grandchild, Prince Kiem is summoned before the Emperor and commanded to renew the empire's bonds with its newest vassal planet. The prince must marry Count Jainan, the recent widower of another royal prince of the empire.

But Jainan suspects his late husband’s death was no accident. And Prince Kiem discovers Jainan is a suspect himself. But broken bonds between the Empire and its vassal planets leaves the entire empire vulnerable, so together they must prove that their union is strong while uncovering a possible conspiracy.

Their failure will be the end of the empire. 
“Well, someone has to marry the man,” the Emperor said.

She sat, severe and forbidding in a high-collared tunic, in her reception room at the heart of the warren-like sprawl of the Imperial Palace. The arching windows of the tower were heavily optimized to amplify the weak autumn sunlight from Iskan V; the warm rays that lit the wrinkled Imperial countenance should have softened it, but even the sunlight had given that up as a bad job.

Across from her, in a formal uniform that was only slightly crumpled, Kiem—Prince Royal of Iskat and the Emperor’s least favorite grandchild—had been stunned into silence. He was rarely summoned to an Imperial audience unless he’d done something spectacularly lacking in common sense, so when the Emperor’s aide had called him, he’d racked his brain for a cause but had come up empty-handed. He’d half wondered if it was about the Galactic delegation that had arrived yesterday and stirred up the palace. Kiem wasn’t a natural when it came to politics; maybe the Emperor wanted to warn him to stay out of the way.

This was the opposite of staying out of the way. Kiem had braced for a dressing-down, not to walk out of the room engaged to a vassal diplomat he’d never even met.

He opened his mouth to say, I don’t see why anyone has to marry him, then thought better of contradicting the Emperor and shut it again. This was how he got himself in trouble. He rephrased. “Your Majesty, Prince Taam has only been dead a month.”

It sounded awful the moment it left his mouth. Taam had been Kiem’s cousin, after all, and the Imperial family was technically still in mourning. Kiem had naturally been shocked when he heard of the flybug accident, but at the last count he’d had just over forty relatives ahead of him in the succession, mostly cousins, and he hadn’t known Taam particularly well.

The Emperor gave him a withering look. “Do you think I am unaware?” She tapped her fingertips on the lacquered surface of the low table beside her, probably giving him a second chance to remember his manners. Kiem was too disturbed to really appreciate it. “The Thean treaty must be pinned down,” she said. “We are under significant time pressure.”

“But—” Kiem said. He scrabbled for an argument as his gaze followed the movement of her fingers. The low table was crowded with official gifts, mainly from vassal planets: crystal plates, a bowl of significant mosses, a horrible gold clock from Iskat’s Parliament. Among them, under a bell jar, a small Galactic remnant glowed softly. It was a color Kiem’s eyes couldn’t process, like a shard of glass that had been spat out of another dimension. Even its presence in the room made Kiem’s brain uncomfortable. He made himself look away from it, but unfortunately that meant looking at the Emperor.

He tried again. “But, Your Majesty—marrying Taam’s partner—” He was vaguely aware of who it was. Prince Taam and Count Jainan, the Thean representative, had been one of the royal family’s more intimidatingly polished couples, like the Emperor had ordered them built in a synthesizer. Iskat bound treaties with marriages—always had, right from when the first colonists settled on the planet—and one of the unspoken reasons that Iskat had so many minor royals was to have representatives on hand when they were needed. Kiem had nothing to disqualify him: he wasn’t a parent, overly religious, opposed to monogamy, gender-exclusive, or embarrassingly hung up on someone else. That didn’t mean he could stand in for Taam, Jainan’s partner of five years. “Ma’am, surely you need someone more”—dignified—“suitable. Prince Vaile, maybe. Or no one? Forgive me, but I don’t see why we have to find him another partner.”

The Emperor regarded Kiem as if painfully reminded of the differences between him and Prince Taam. “You have not paid any attention to the political situation, then.”

Kiem rubbed a hand across his forehead unconsciously. The air in the Emperor’s rooms always felt dry and slightly too hot. “Sorry.”

“Of course not. I see you were drinking last night. At the carnival?”

“No, I—” Kiem heard himself sound defensive and stopped. He hadn’t been falling-down drunk for a long time now, but the script between him and the Emperor was apparently carved in stone from back in his student days, when every summons turned out to be an Imperial reprimand for his latest minor scandal. “I only went for the afternoon.”

The Emperor glanced at the shifting pictures in the press folder on the table. “Press Office informs me that you put on a troll costume, joined a carnival procession group, and fell in a canal in the middle of the parade.”

“It was a kids’ group,” Kiem said. He would have panicked about trying to explain the newslog photos, but he didn’t have any panic left over from being summarily engaged to a stranger. “Their troll dropped out at the last minute. The canal was an accident. Your Majesty, I—I’m”—he cast about desperately—“too young to get married.”

“You are in your mid-twenties,” the Emperor said. “Do not be ridiculous.” She rose from her seat with the careful smoothness of someone who received regular longevity treatments and crossed to the tower window. Kiem rose automatically when she did but had nothing to do, so he clasped his hands behind his back. “What do you know about Thea?”

Kiem’s spinning brain tried to latch on to some relevant facts. Iskat ruled seven planets. It was a loose, federated empire; Iskat didn’t intervene in the internal affairs of its vassals, and the vassals in return kept their trade routes running smoothly and paid taxes. Thea was the newest and smallest member. It had been assimilated peacefully—the same couldn’t be said of all the Empire’s planets—but that had been a generation ago. It didn’t usually make the headlines, and Kiem didn’t pay much attention to politics.

“It has … some nice coastland?” Kiem said. All he could come up with were some tourist shots of green and sunny hills falling down to a cobalt-blue ocean, dredged up from some long-forgotten documentary, and a catchy snippet from a Thean music group. “I, uh, know some of its”—the Emperor didn’t listen to music groups—“popular culture?” Even he winced at hearing how that sounded. That wasn’t a basis for a relationship.

The Emperor examined him like she was trying to figure out how his parents’ genes had produced something so much less than the sum of their parts. She looked away, back to the view outside. “Come here.”

Kiem obediently crossed to the window. Below, the city of Arlusk sprawled under a snow-heavy sky, pale even through the light-optimizing glass. The grand state buildings jutted up through the city like veins of marble emerging from rock, two hundred years older than anything else in the sector, with a jumble of newer housing blocks nestled around them. The first real snow of the long winter had fallen yesterday. It was already turning to slush in the streets.

The Emperor ignored all of that. Her gaze was fixed on the far side of the city, where the spaceport spilled down the side of a mountain like an anthill. Silver flashes of shuttles came and went above it, while berthed ships were nestled in huge bays dug into the mountainside. Kiem had known the bustle of local space traffic all his life. Like most Iskaners, he’d never made the year-long journey to the far-off galactic link—the gateway to the wider galaxy—but the Empire’s vassal planets were much closer, and ships hopped between them and Iskat all the time.

One ship, hovering unsupported next to a servicing tower, gave Kiem an immediate headache. Its matte-black surface sucked in all reflection and gave off rippling shimmers that had nothing to do with the angle of the sunlight. Kiem squinted at the size of it. Nothing that big should be able to float in planetary gravity. It was nothing like the shard on the Emperor’s display table, but it was definitely weird shit that didn’t come under the normal rules of physics. He took a stab. “The Galactics?”

“Do you read nothing but tabloid logs?” the Emperor said. It seemed to be rhetorical. “That ship belongs to the Resolution. Despite its frankly absurd size, it contains one Auditor and three administration staff. It can apparently jump through links under its own power and is impervious to mass scanners. The Auditor—whom I will admit to finding deeply unsettling on a personal level—is here to legally renew the treaty between the Empire and the Resolution. Even you cannot have missed this. Tell me you know what the Resolution is.”

Kiem stopped himself from saying he didn’t actually live under a rock, even if Iskat was a year’s travel from any other sector. “Yes, ma’am. It runs the rest of the galaxies.”

“It does not,” the Emperor said sharply. “The Resolution is just that: an agreement between ruling powers. It runs the link network. Iskat and our vassals have signed our own set of Resolution terms, as have other empires and Galactic powers. As long as those are in place, we can trade through our link, keep our internal affairs to ourselves, and be certain no invading force will use the link to attack us. We are due to sign the treaty on Unification Day in just over a month. The Auditor, if all goes well, will look through our paperwork, sweep up those remnants the Resolution is so obsessed with, witness the treaty, and leave.”

Kiem blinked away from the eye-watering Resolution ship and looked at her instead. Her gnarled hand briefly touched the flint pendant at her throat in a gesture that might have been stress. Kiem couldn’t remember a time when her hair hadn’t been pure white, but she never seemed to age. She only got thinner and tougher. She was afraid, Kiem realized. He felt a sudden chill; he’d never seen her afraid.

“Got it,” he said. “Play nice with the Resolution. Give the Auditor the VIP treatment, show him what he wants, send him away again.” He made a last-ditch attempt. “But what’s that got to do with me and the Theans? Surely marriages are the last thing you want to worry about now.”