Book three in the Dirty Wild trilogy that began with Wild Rebel.

This trip down memory lane with Jolie has mended as much as it’s torn up.

I promised her I could handle anything. Whatever she was hiding, my wild heart would always belong to her.

But I could never have imagined this truth.

And she can’t blame me for how this will all end. 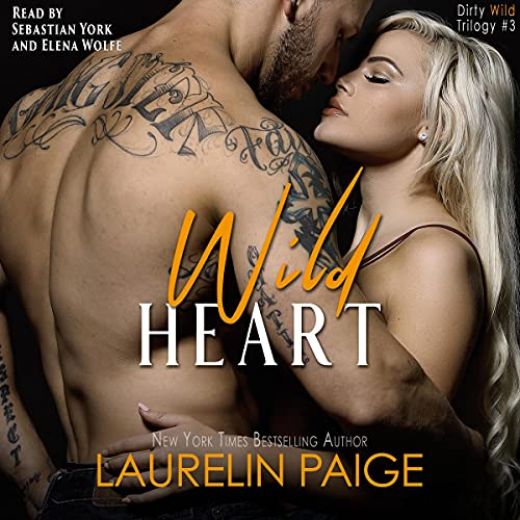 The soft landing of something on my upper back woke me up. I opened my eyes and rolled over to discover my father towering over me and a grocery bag on the bed behind me. I didn’t have to look inside to know what I’d find.

“You know what to do.” He handed me an empty plastic cup.

I stifled a groan, and simultaneously, I felt my stomach drop. Stuffing down my emotions often led to a sense of dread, but this was more than that. While the routine was familiar to me, I had real reason to fear today’s results would be different.

I’d been trying not to think about that. I wouldn’t be able to push it off now.

Out of habit, my gaze flickered to my window. He’d glued it shut the day after he’d discovered Cade in my room. He’d installed bars the following week, sealing me in a literal prison.

How long ago had that been now? Four weeks? Only four more until he came back for me. It already felt like a lifetime had passed, and graduation day seemed an eternity away.  “Hurry it up, Julianna. I need to be in early for a meeting with Sylvia.”

No wonder my alarm hadn’t gone off yet.

With a sigh, I threw the covers off me and picked up the bag. “We did this just two weeks ago,” I said, but I swung my legs around and put my feet on the floor. Complaining about it wouldn’t get me out of it.

My empty stomach churned, and I wondered if I could manage to throw up on his shoe if I angled myself right.

But the wave of nausea passed, so with the grocery bag in one hand and the cup in the other, I headed to the bathroom.

“Leave the door propped open,” he reminded me when I tried to close it out of habit.

This wasn’t new either. He always made me keep the door ajar, as though he thought I might have urine tucked away somewhere in my bathroom cabinets, and I’d try to substitute it out for mine. And even if I did, what good would that do? It wasn’t really about what I might do, though.

It was about control. It was about me understanding that he was my lord and master. My prison guard. The person who controlled my fate.

What would he do when I ran away?

I almost wished I could be there to see his reaction.

A smile briefly bent my lips thinking about it, but it vanished as soon as I took the cardboard box out of the bag, and I was forced to face my situation. This was the whole reason I’d avoided truly fantasizing about the future with Cade this last week. This unknown could change everything, and I hadn’t been able to process that possibility.

“Julianna?” My father was as impatient to get this over with as I was reluctant.

“Sorry. I was rereading the instructions.” It was a lie that was hard to justify considering how often I’d had to take these—once a month since I’d started my period, more frequently since he’d caught me with Cade—but I noisily tore into the box so he wouldn’t feel the need to confront me on it.

Leaving the unpackaged stick on the counter, I took the cup with me to the toilet to do the deed. “This would really be easier if you just put me on the pill. Since you’re so worried about me getting knocked up.

” This was another familiar conversation, and he didn’t even bother to give me his usual lecture about how preparation was an invitation and all that.

That wasn’t the reason he didn’t give me protection. It was another way he could control me. Plus, I was pretty sure he got off on how humiliating the whole thing was. Sick fuck.

I flushed the toilet and took the cup, now filled with my pee, back to the bathroom counter. After uncapping the stick, I dipped the end in and counted to ten. Then I put the cap back on and set it on the counter while I washed my hands, trying to ignore the current wave of nausea and the probability that I didn’t need this test to know what was going on inside me.

As soon as he heard the sound of the faucet, my father nudged the door the rest of the way open and leaned against the frame.

His eyes were pinned to the test, watching as the pink control line brightened. “You know what happens if this is positive, right?”

This was another speech he gave every time. He would take me to the doctor to get me an abortion. I’d go through the procedure willingly, or he’d tie me to the bed and take care of it himself with a hanger if need be. There would be no bastard grandchild. End of story.

“Are you sure? Maybe you should tell me so I can be sure you’re clear.”

His eyes darkened, and his hand twitched at his side while he tried to decide what to do about my disrespect. It was obvious he wanted to backhand me, and I wasn’t sure why he even had to think about it since he rarely denied himself a reason to punish me, especially since the whole Cade incident. He’d been taking out his wrath about that on me for the past month.

Today, though, he let it go and glanced at his watch. “One more minute.”

One more minute until the truth was confirmed. One more minute until I could no longer pretend my breasts didn’t hurt more than when they did with PMS and that my exhaustion wasn’t just about missing Cade and my missed period wasn’t about stress and that the come-and-go nausea wasn’t a weird stomach bug.

What if I was? What would I do then?

Tears pricked, and I shut my eyes, refusing to watch for the second line. I had forty-five seconds left before I had to figure anything out, and I planned on putting it off as long as possible.

My eyes were still closed when I heard my father move to pick up the stick from the counter. “How likely is it his?”

A sob threatened in my chest—or another urge to vomit—and I had to sit down on the edge of the bathtub for support. He knew the answer already, but he wanted me to know it too, and even though I already did, I did the math, figured out the calendar in my head, and thought about when I was most likely ovulating.

The thing was, I didn’t know.

And there was no way I could know without a paternity test, and I didn’t know if that was even possible before a baby was born, which meant I couldn’t have an abortion, no matter what my father said. I wouldn’t give up Cade’s child. No way, no how.

But being pregnant put a wrench in running away with Cade. And if it ended up not being his, was it fair to saddle him with that burden? “

You need money to have a child,” my father said, as if he could read my mind. “You need a home. Insurance. Healthcare. Baby clothes and furniture. Who’s going to pay for diapers? And formula? Minimum wage isn’t going to get you far. Even if you’re both working.”

I wasn’t surprised that he had guessed I’d been planning to leave. I pushed him off every time he tried to talk about my plans after graduation, and he’d made it very clear he wanted me to stay with him while I got a degree in education so I could come help out at the family school.

What did surprise me was something else. “You’ll let me keep it?”

He set the stick on the counter and came to crouch in front of me so we were eye to eye. He had his doting father mask on, which was probably the cruelest of all his masks because it confused me and tore at my emotions. “It will be very hard,” he said softly, taking my hands in his. “And you’ll need my support, but if that’s what you really want, princess, of course you can keep it.”

Silent tears streamed down my cheeks. I had no options. It was a facade of a choice.

So I took the devil’s bargain, knowing full well that nothing he offered came without a cost.