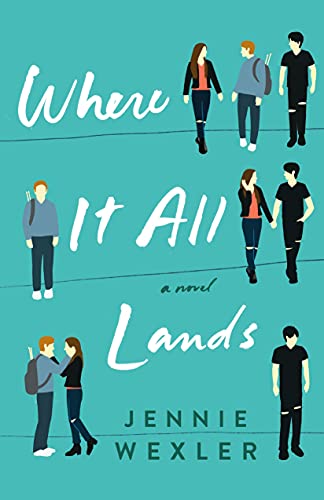 A Spring/Summer Pick by She Reads * Culturess

"For fans of Sarah Dessen and Rainbow Rowell, a moving story about loss and love and finding out who you really are.” - Paige McKenzie, New York Times Best Selling author of The Haunting of Sunshine Girl

A Sliding Doors-esque novel that reveals how our choices define us and how no matter the road, love can find its way.

Stevie Rosenstein has never made a true friend. Never fallen in love. Moved from city to city by her father's unrelenting job, it's too hard to care for someone. Trust in anything. The pain of leaving always hurts too much. But she'll soon learn to trust, to love.

Drew and Shane have been best friends through everything. The painful death of Shane's dad. The bitter separation of Drew's parents. Through sleepaway camps and family heartache, basketball games and immeasurable loss, they've always been there for each other.

When Stevie meets Drew and Shane, life should go on as normal.

But a simple coin toss alters the course of their year in profound and unexpected ways.

Told in dual timelines, debut author Jennie Wexler's Where It All Lands delivers a heartbreaking and hopeful novel about missed opportunities, second chances, and all the paths that lead us to where we are.

"This book succeeds in creating all the feels." - Kirkus

The entire high school fills the church, but he’s not here. He’s not anywhere. The football team shuffles in late and leans against the back wall. A low murmur hangs in the air, the sound of sadness. His family walks in and their faces are vacant, eyes hollow. The coffin is closed. I heard it was too gruesome for an open casket and I don’t want to think about what that really means. Whispers from the row behind me are like hissing snakes, relentless and fraying my nerves. I try to tune it out, but bits and pieces worm through my ears.

The accident … So young … So unfair …

I close my eyes, squeezing the lids together to stop tears. When I open them, the church is blurry, like a dream, like maybe this isn’t happening. If only it wasn’t.

“Stevie,” he says, his voice brittle. I grab hold of his hand, afraid if I let go, I won’t be able to stay here. I need his hand, like an anchor to my seat. “Just breathe.”

I inhale deeply, but my throat catches, and my vision blurs again. One tear slides to my cheek, like a single raindrop before a storm, and then all at once it spills out of me. My chest heaves, the sobs escaping faster than I can catch them. My entire body screams, like I’m in a free fall, with no ground below.

I heard … A parent’s worst nightmare … Pray for them …

His hand squeezes mine as the priest walks in, and the room falls silent except for the crying, so much crying. I can’t catch my breath. The stained-glass windows bend and distort as my mind struggles to make sense of this, my very first funeral. All the moments that led to this one flash before me as beads of sweat break out along my hairline. I squeeze his hand, holding on so I don’t faint, wishing I could go back to the beginning.

I delete the voice mail without listening. Five total. One by one I delete the text messages, my fingers tapping furiously at the screen. An overwhelming urge to smash my phone on the kitchen tile crashes through me, but before I get the chance, Mom puts her hand on my shoulder. I shove my phone into the back pocket of my jeans and flip up my hood, hunching over the white marble countertop. She tugs the strings of my sweatshirt but won’t look me in the eye.

“Your dad called for you.”

“Tell him to go fuck himself,” I say calmly. No reaction from Mom. It’s like she doesn’t have the energy.

“Said he couldn’t reach you on your phone.”

I don’t respond. Mom opens the Sub-Zero and sighs, pulling a half-filled pitcher of orange juice off the barren shelf. The liquid splashes on the marble as she pours a glass. She rips a paper towel from the roll and wipes it up, a message flashing across the Apple Watch on her wrist.

“I’m going to be late,” she says, pushing an oversize pair of sunglasses up her fake nose. She bends to kiss me on the cheek, but I turn away. I down the juice, grab my keys, and stand, a good head taller than Mom.

“Have a good day,” she says as I head for the door, which makes me laugh because it’s been exactly one hundred and eighty-three days since I’ve had a good day. If Mom ever asked, she’d know. But Mom never talks about the day Dad left. Since then, she hasn’t talked much at all.

I back the Jeep down my driveway as Ed Sheeran croons on the radio about wanting to go home. It’s all pointless, this longing for a place you once knew. You can’t get it back. No matter how hard you try.

I turn down Sheeran and swerve into the driveway next door. Some guy walking a golden retriever shoots me a dirty look as I honk twice. Yeah, I know it’s early. The huge iron gates swing open, revealing Shane jogging down the driveway, a green backpack swinging from his shoulder. He turns, two drumsticks sticking out of his back pocket, and waves at Kathy. She stands in the bay window holding a cup of coffee. Our morning ritual started in elementary school, and it stuck. Except back then we boarded a big yellow bus, sporting matching light-up sneakers.

“You do realize it’s August,” Shane says, eyeing my sweatshirt as he settles into the passenger seat. He wedges his backpack and drumsticks between his feet.

“Didn’t want my mom to see.” Not that she would have noticed. She hasn’t noticed anything in months.

“You actually did it?”

Shane grabs my arm and pushes up my sleeve, taking in the Roman numerals tattooed in black ink on the inside of my wrist—the number that represents a date. His eyes shift to the side, lost in our shared memory.

“That was a good day,” he says, gazing out the window.

“I wouldn’t go that far. You almost…”

Shane unzips his backpack and pulls out a water bottle, taking a long sip. A blue stuffed animal peeks out from behind the zipper, a tuft of fuzzy hair at the top. He shoves it back in.

“What the hell is that?” I ask, gesturing at his bag.

“Nothing.” Shane pulls down the brim of his blue EMT cap, almost covering his eyes. Ever since he started volunteering with the squad last year, that hat has become a permanent fixture on his head.

“Yeah, right.” I elbow Shane and grab his bag, pulling out the stuffed toy, a powder blue Aladdin genie with a Cheshire cat grin. “Are you kidding me with this?”

“What? It’s this season’s theme,” Shane says like it’s normal to be carrying around a stuffed genie.

“I’m aware it’s this season’s theme. But c’mon. Might as well beg Brent Miller to kick your ass.”

“I don’t care about Brent Miller,” Shane says, snatching the genie from me and shoving it in his bag, “I thought it would be cool if I attached him to my quads.”

“Do not attach that thing to your quads.” I cringe at the thought of Brent grabbing the genie and ripping into Shane. Brent’s called Shane every name in the book, none of which I care to repeat.

Shane sighs, glancing at me. He smirks and grabs a penny from the middle console, flipping the coin over in his palm.