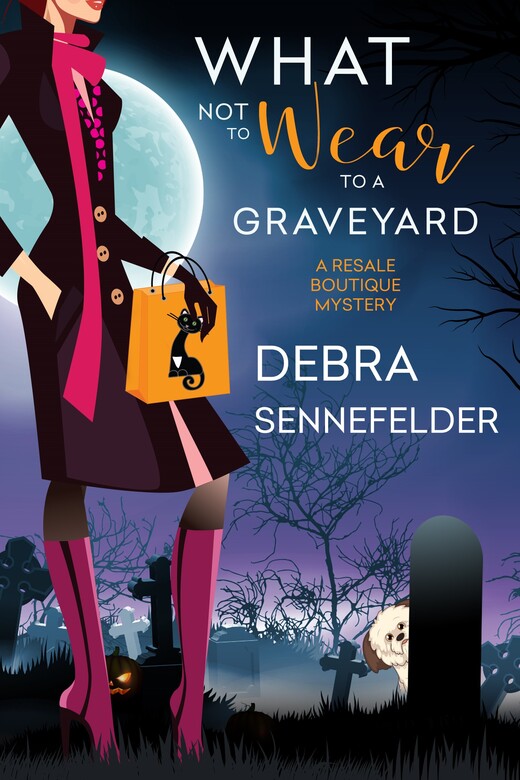 Book 0: Resale Boutique Mystery
Debra Sennefelder
Follow
Hidden in the dead woman’s past is a secret that could be the motive for the murder.
Genres: Amateur SleuthCozy MysteryFemale Sleuths
Buy now
Available in:
Share

After trading her Manhattan digs for her upstate hometown, fashionista Kelly Quinn has big plans for her grandmother’s consignment shop. But this All Hallow’s Eve someone is already dressed to kill . . . A socialite’s missing dog has made front page news in Lucky Cove—complete with a hefty reward. But between renovating the consignment shop, planning her costume for a 1970s themed Halloween party, and scouting a location for a fashion shoot, Kelly doesn’t have time to search. Yet a visit to the local colonial-era cemetery—ideal for the moody atmosphere she’s after—soon turns up the precious pooch. Kelly’s looking forward to collecting the check—until she makes a gruesome discovery in an abandoned farmhouse: The dog’s owner, stabbed through the heart. Kelly can’t help wondering why Constance Lane was traipsing around the farmhouse in stilettos. But as Kelly gets decked out in a vintage disco caftan, that isn’t the only fashion misstatement spooking her. Hidden in the dead woman’s past is a secret that could be the motive for the murder. And as the Halloween party gets started, even a menacing clown and a threatening bearded lady can’t keep Kelly from trick or treating for the truth—even if it means her last dance . . .

“Her dog is missing?” Kelly Quinn dug into her suede tote for money to pay for the coffee she’d ordered. She’d been digging for cash and coming up short ever since moving back to her hometown of Lucky Cove, New York.

Her best friend, Liv Moretti, stepped forward and placed an order for a large latte. Doug’s Variety Store had three sizes—small, medium and large. It was a throwback to when ordering coffee was simple and often confused the summer people from the city.

“It made the front page of the Lucky Cove Weekly. His name is Billy. He’s a Shih-Tzu. White with a little brown. He looks so cute in his photo.” Liv handed her credit card to the counter person.

“That’s newsworthy? It seems a little over-the-top.” Kelly knew Lucky Cove was hard-pressed for big news, but a missing dog story on the front page of any newspaper seemed ridiculous. She pulled out three dollars and slapped them on the counter. She’d been craving a large Pumpkin Spice all morning. It was an autumn ritual like pulling out her tall boots and chunky sweaters. There were so many things to love about October she couldn’t begin to list them all.

“This isn’t the city. Besides, Constance Lane is one of our famous residents.”

Kelly arched an eyebrow. She was doubtful about Constance’s claim to fame. “She was married to a senator for a nanosecond.” Kelly lifted her coffee cup from the counter. Her day was about to get a whole lot better.

“I don’t remember which number she was, but I remember she’d been cheated on and tossed aside for a newer model. The reward is five thousand dollars. That’s big news around here.” Liv reached for her cup.

Kelly choked on her sip of coffee. “How much? Is she crazy?”

“Crazy in love with her dog.” With her latte, Liv claimed a table for them. The morning rush had passed through, and now all that lingered were a handful of freelancers, retirees, and stay-at-home moms, they’d pieced together two tables for the six of them and were engaged in a lively conversation about potty training.

“I could sure use that money to pay for some renovations to the boutique.”

Liv smiled. “I’m so glad you decided to stay in town. I’ve missed hanging out with you.”

Kelly took another drink of her coffee. She knew her friend since childhood was excited about her decision to stay and run the consignment shop, she’d inherited from her granny. It also came with an apartment upstairs for Kelly to live in while she settled into her new life from out-of-work fashion buyer to retail shop owner. The inheritance also came with a cat, Howard, and her uncle, Ralph Blake, who was left the headache of being the executor.

“Maybe you should go look for the dog. The money would come in handy.” Liv leaned back and sipped her latte.

“There’s way too much on my plate right now for me to find a dog. Everything in the shop and the apartment needs to be overhauled.” While she wanted to stay true to the roots of the shop, it needed a total revamp to attract new customers for both buying and consigning. “Plus, we have Sally Hathaway’s Halloween party.”

Liv’s eyes brightened, and she clapped her hands. “I’m so excited you’re going this year. We always had fun at that party.”

“Frankie suggested we coordinate our costumes, and he’s thinking of a 1970s theme.” Frankie was her Uncle Ralph’s son from his first marriage. Now on marriage number three, Ralph had a baby daughter named Juniper. She was a bundle of cuteness Kelly couldn’t get enough of.

“I could go as Cher!” Liv sipped her latte.

Of course, she could. Tall and lean, all she needed was a long wig to cover her pixie cut and a spray tan session. Even though she was one-hundred percent Italian, she had fairer skin than Kelly.

“I’ll send you a link to the website he found costumes on.”

“I could see Frankie as a hippie. Text the link to me when you have a chance. I better get going. My shift at the bakery starts in a few minutes.” Her family owned the popular bakery in town. She grabbed her cup and stood.

“Will do. Oh, I’m going to scout our shoot location for the social media campaign.” One of the tasks on Kelly’s long to-do list was to create a social media presence for the boutique, and she wanted to style the merchandise in a way that caught budget-minded fashionistas. What better way than a photoshoot using a model? She’d convinced Liv to pose for a few photographs. What took some begging and bribery was getting her to agree to the shoot location.

“I’m still worried Nona will be upset that we’re taking the photos at a cemetery.” Concern filled Liv’s dark eyes and her lips pressed together.

“It’s not a Catholic cemetery.” Kelly wasn’t sure how much of an argument that was.

Kelly did. She also knew she was risking leftovers of lasagna made with homemade pasta if she offended the woman.

“But it sounds like fun. I’ve never modeled before. I’m looking forward to it.”

And with that, Kelly exhaled the breath she’d been holding. If Liv backed out, she didn’t have a plan B, other than just photographing the clothing on a dress form. And, seriously, how boring was that idea?

After saying goodbye to her friend and finishing her coffee, Kelly slipped behind the wheel of her Jeep and set out toward the Colonial Church.

The sturdy all-wheel-drive vehicle was on loan to her from Pepper Donovan, her late grandmother’s best-friend and full-time salesperson at the boutique. It was yet another kind thing done by Pepper that had Kelly forever grateful.

The GPS alerted her to the upcoming left turn onto Clegg Road, which led to the old cemetery. She guided her vehicle to a spot in front of the wrought-iron entry gate and parked.

The last time she was there, she was nearly scared out of her wits. The visit included a boyfriend, a six-pack of beer and creepy noises. She was out of there before anything happened between her and what’s his name.

This visit however was going to be okay. She told herself there was nothing to be afraid of.

She locked the Jeep, leaving her tote on the front seat and walked through the gate, which looked as old as the cemetery. She tugged her faux fur teddy coat tighter around her body. The morning was brightening, as the sun peeked out from behind the clouds, but it was still chilly.

The graveyard was tucked away in the back of its deconsecrated church and surrounded by a forest thick with trees, wild animals and enough ghost stories to last a lifetime.

She shuddered. All those tall tales she’d heard as a child were replaying on a loop in her head.

“Stop it. There are no such things as ghosts.”

She continued walking along a grassy path, past a scattering of century-old headstones summarizing the short lives of Long Island’s forefathers. It looked like someone had been maintaining the graveyard. There wasn’t any trash or any overgrowth, just a blanket of fallen leaves as far as she could see. The trees overhead were bare, and she expected at night in the darkness they cast scary figures.

She gave herself a mental shake and re-focused her brain on the reason she was there—the photoshoot.