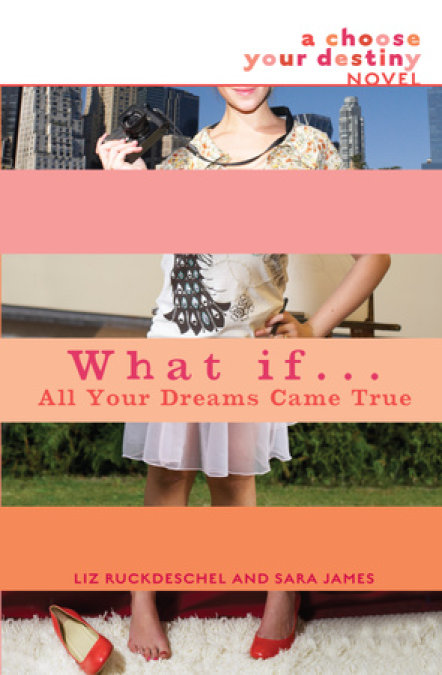 Time to send Haley off into the world. Are you ready?

Haley's come to the end of her junior year, and it’s time for her friends and readers to bid her adieu. But you’ve got one last job to do: leave her on a happy note! Can you give Haley the tools and friends she needs to lead a happy life? Should Haley follow up on her budding interest in photography—or should she spend her summer partying with the popular kids? SATs, college tours, and the all-important senior year are just around the corner. Have you prepared Haley?

Nothing grows without roots.


"Isn't it supposed to be spring?" Haley Miller complained. She sat in her kitchen on a dreary March morning, ignoring a bowl of oatmeal and watching a light, wet snow fall on the dead leaves in the backyard. "Spring break's over. Winter officially ended last week. It's time for sun."

"These East Coast winters do seem to last forever," said her mother, Joan, sipping a cup of tea. "It's not like spring in Marin, that's for sure."

This was Haley's second New Jersey spring, and she was still adjusting to the disappointing weather. The Millers had moved to Hillsdale from Marin County in Northern California, where all year round the trees bloomed, the sun nestled like a poached egg in a brilliant blue sky and a mild breeze puffed off the Pacific Ocean. Nothing like the melting slush and gunmetal gray skies of Jersey.

Haley's little brother, Mitchell, licked yogurt off his pudgy fingers, then tugged on Haley's straight auburn hair. It was one of his ways of getting her attention. The attention this usually got from her, however, was negative.

"Mitchell, stop it." Haley swatted his fingers away. "What is it with you and my hair?"

Mitchell responded by tugging on her hair again. Over the years he'd gotten strained peas, a lollipop  and several chunks of chewing gum in her hair. She didn't appreciate it.

"The groundhog saw his shadow," Mitchell declared. "That means six more weeks of winter." He paused to count the weeks from Groundhog Day on the wall calendar by the phone. "It's been more than seven weeks now."

"Thanks for the update, robo-brain," Haley groused. "Now I'm more depressed than ever."

"I think I have a cure for your seasonal affective disorder," her father, Perry, said. "What about a father-daughter weekend in our old stomping grounds?"

Haley was almost afraid to perk up at this appealing offer. What if it were some kind of trick? "By 'old stomping grounds,' you mean California, right?" she asked. "Are you serious?"

"Sure," Perry said. He'd been in a generous mood lately. Haley could only assume it was because his work was going well. "I've been invited to speak at a conference at UC-Berkeley next weekend: 'The Environmental Dialectic in Documentary Film.' You haven't been out West in a year or so--want to come with?"

Haley jumped up and threw her arms around her father's neck. "Definitely!" she cried.

"Good idea, Perry," Joan said. "It's been torture watching Haley mope around the house the last week or so."

"It hasn't exactly been a party here with you either," Haley said.

It wasn't like her to snap at her mother that way. Haley hadn't been feeling herself lately, though it was hard to say why. It had been a fairly eventful winter at school, full of scandals, breakups, eating disorders, humiliations, engagements, political intrigue. . . .

The Cocobot clique--Coco De Clerq, Sasha Lewis, Cecily Watson and Whitney Klein--had discovered that their male counterparts (Spencer Eton, Johnny Lane, Drew Napolitano and Reese Highland) had spent their winter break cavorting with swimsuit models. The girls broke up with the boys, disastrously, and now, except for Reese and Haley, were mostly back together with them. Meanwhile, Whitney's mother and Sasha's father had announced their engagement, making Whit and Sasha soon-to-be-stepsisters. In other engagement news, nerdlinger Dave Metzger's mother planned to marry art teacher Rick Von, sending Dave screaming into the arms of girlfriend Annie Armstrong and RoBro!, the robot brother he had created. Senior class brain Alex Martin had become a crucial cog in Governor Eleanor Eton's political machine, and art rebels Shaun Willkommen and Irene Chen tried to pry boy photographer Devon McKnight from the arms of irritating freshmeat Darcy Podowski.

What was Haley's place in all this chaos? She wasn't sure. After so much upheaval, the rest of the Hillsdale crowd seemed to be settling down again--but Haley felt a bit lost. Ever since spring break had ended, she'd been coming straight home from school, trying to make a dent in the mountain of homework threatening to overwhelm the last half of her junior year, and hanging with seven-year-old Mitchell in her free time--not the most exciting scenario. She could use a change of scene, and maybe a reminder of where she came from and who she used to be. Maybe a trip to San Fran was just what she needed.

"So, where are we staying?" she asked her father. "The Fairmont? The Orchard?"

"Hotel Durant," Perry said. "It's just off the Berkeley campus."

"We're not staying in the city?" Haley had been hoping for a trip to glamorous San Francisco, not sleepy, granola-flecked Berkeley. Besides, she was itching to see her old childhood best friend, Gretchen Waller, who lived in San Francisco. The last time Haley had seen her, Gretchen was auditioning for commercials and styling herself as a twenty-first- century Audrey Hepburn. Haley didn't think her mere presence could lure the new sleeker-than-thou Gretchen out to ho-hum Berkeley.

"I won't have much time for sightseeing," Perry said. "But there's plenty for you to do in Berkeley. . . ."

"What if I stayed at the Wallers' for the weekend?" Haley asked. "That way I could be with Gretchen while you're working."

"It sounds fine to me," Joan said. "If it's okay with the Wallers. I'll give Judy a call tonight and see what she says."

"I was hoping for some quality time with my daughter," Perry said. "But okay."

"Perfect!" Haley said. Things were starting to look brighter already, even if the sky was still gunmetal gray.


"Breakfast at Fisherman's Wharf, take one." Haley aimed her video camera at an outer wall of the _famous San Francisco tourist attraction. "And . . . action! Go Gretchen!"

Gretchen strolled into the shot wearing her signature black sheath and oversized sunglasses, looking much like a black-haired Audrey Hepburn. She carried a huge bouquet of flowers in her arms. She paused at the wall, waiting for someone to walk by. It took only a minute before a very flamboyant drag queen strutted past. Gretchen gave her the flowers. The drag queen gave Gretchen a big hug and kiss, and then agreed to be interviewed.

"Are you kidding?" the drag queen said. "What kind of idiot would walk away from Audrey Hepburn?"

"What's your favorite place in San Francisco?" Haley asked from behind the camera.

"The Candy Bar," Miss Taken said. "Of course. I sing there on Friday nights. You girls should stop by--especially if you like chocolate martinis."

"We would, only we're under twenty-one," Gretchen said.

"What? You're kidding me. You girls better get some beauty sleep--I thought you were at least twenty-five."