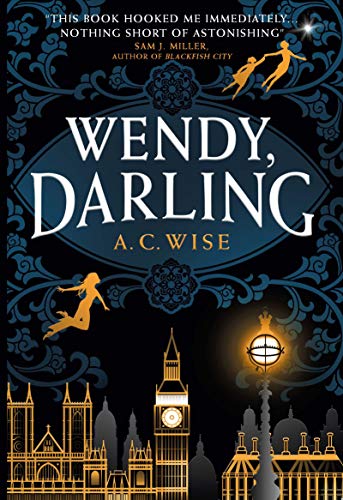 A lush, feminist re-imagining on what happened to Wendy after Neverland, for fans of Circe and The Mere Wife.

Find the second star from the right, and fly straight on 'til morning, all the way to Neverland, a children's paradise with no rules, no adults, only endless adventure and enchanted forests – all led by the charismatic boy who will never grow old.

But Wendy Darling grew up. She has a husband and a young daughter called Jane, a life in London. But one night, after all these years, Peter Pan returns. Wendy finds him outside her daughter's window, looking to claim a new mother for his Lost Boys. But instead of Wendy, he takes Jane.

Now a grown woman, a mother, a patient and a survivor, Wendy must follow Peter back to Neverland to rescue her daughter and finally face the darkness at the heart of the island...

There is a boy outside her daughter’s window.

Wendy feels it, like a trickle of starlight whispering in through a gap, a change in the very pressure and composition of the air. She knows, as sure as her own blood and bones, and the knowledge sends her running. Her hairbrush clatters to the floor in her wake; her bare feet fly over carpeted runners and slap wooden floorboards, past her husband’s room and to her daughter’s door.

It is not just any boy, it’s the boy. Peter.

Every inch of her skin wakes and crawls; the fine hairs all along the back of her neck stand on end—the storm secreted between her bones for years finally breaking wide. Peter. Here. Now. After so long.

She wants to shout, but she doesn’t know what words, and as Wendy skids to a halt, her teeth are bared. It isn’t a grimace or a smile, but a kind of animal breathing, panicked and wild.

Jane’s door stands open a crack. A sliver of moonlight—unnaturally bright, as if carried to London from Neverland—spills across the floor. It touches Wendy’s toes as she peers through the gap, unable for a moment to step inside.

Even though she’s still, her pulse runs rabbit-quick. Backlit against that too-bright light is the familiar silhouette: a slender boy with his fists planted on his hips, chest puffed out and chin tipped up, his hair wild. There is no mistaking Peter as he hovers just beyond the second-floor window. She blinks, and the image remains, not vanishing like every other dream stretched between now and then. Between the girl she was, and the woman she’s become.

At the same time, she thinks no, no, please no, but too-long fingers already tap the glass. Without waiting for her say-so, the window swings wide. Peter enters, and Wendy’s heart swoops first, then falls and falls and falls.

Once invited, always welcome—that’s his way.

Peter doesn’t notice Wendy as she pushes the hall door open all the way. He flies a circle around the ceiling, and she wills her daughter to stay asleep, wills her tongue to uncurl from the roof of her mouth. Her legs tremble, holding her on the threshold, wanting to fold and drop her to the floor. It’s such an easy thing for him to enter, and yet her own body betrays her, refusing to take one step into her daughter’s room, in her own house.

It’s unfair. Everything about Peter always was, and it hasn’t changed. After years of her wanting and waiting, lying and hoping, he’s finally here.

And he isn’t here for her.

Peter lands at the foot of Jane’s bed. The covers barely dimple under his weight, a boy in form, but hollow all the way through. Maybe it’s the motion, or the light spearing in from the hall behind Wendy, but Jane half-wakes, rubbing at her eyes. A shout of warning locks in Wendy’s throat.

Hearing him say her name, Wendy is a child again, toes lifting from the ground, taking flight, about to set off on a grand and delicious adventure. Except he’s not looking at her, he’s looking at Jane. Wendy bites the inside of her cheek, bites down in place of a scream. Does he have any idea how long it’s been? Swallowing the red-salt taste of her blood finally unlocks her throat.

“Peter. I’m here.” It isn’t the shout she wishes, only a half-whispered and ragged thing.

Peter turns, his eyes bright as the moonlight behind him. They narrow. Suspicion first, then a frown.

He makes as if to point at Jane, evidence, but Wendy’s answer stops him.

“I am.” Does he hear the quaver, as much as she tries to hold her voice steady?

She should call Ned, her husband, downstairs in his study, either so absorbed in his books or asleep over them as to be oblivious to her flight down the hall. It is what a sensible person would do. There’s an intruder in their home, in their daughter’s room. Jane is in danger. Wendy swallows, facing Peter alone.

Peter’s expression turns into a sneer, Jane forgotten, all his attention on Wendy now. Jane looks in confusion between them. Wendy wants to tell her daughter to run. She wants to tell her to go back to sleep; it’s only a dream. But the mocking edge in Peter’s voice needles her, pulling her focus away.

Wendy’s skin prickles again, hot and cold. The set of his mouth, arrogant as ever, the flicker-brightness of his eyes daring her to adventure, daring her to defy his word-as-law.

“It happens.” Wendy’s voice steadies, anger edging out fear. “To most of us, at least.”

Peter. Here. Real. Not a wild dream held as armor against the world. The years unspool around her as Wendy finally manages to step fully into her daughter’s room. And that armor, polished and patched and fastened tight over the years, cracks. For a terrible moment, Jane is forgotten. Wendy is a creature made all of want, aching for the cold expression to melt from Peter’s face, aching for her friend to take her hand and ask her to fly away with him.

But his hand remains planted firmly on his hip, chin tilted so he can look down at her from his perch on the bed. Wendy takes a second step, and her armor is back in place. She takes a third step, and anger churns stronger than desire—dark water trapped beneath a thick layer of ice.

Wendy clamps her arms by her side, refusing to let one turn traitor and reach toward Peter. She is no longer the heartbroken girl left behind. She is what she has made of herself over the years. She held onto the truth, even when Michael and John forgot. She survived being put away for her delusions, survived the injections, calmatives and water cures meant to save her from herself. She fought, never stopped fighting; she refused to let Neverland go.

It’s been eleven years since St. Bernadette’s with its iron fences and high walls, full of frowning nurses and cruel attendants. A place meant to make her better, to cure her, though Wendy knows she was never sick at all. And here is the proof, standing before her, on the end of her daughter’s bed.

Wendy straightens, hardening the line of her jaw, and meets Peter’s eye. In the last eleven years she’s built a life for herself, for her husband and her daughter. She is not that lost and aching girl, and Peter has no power over the Wendy she’s become.

“Peter—” Wendy hears her own voice, stern, admonishing. The voice of a mother, but not the kind Peter ever wanted her to be.

Before she can get any farther, Peter shakes his head, a single sharp motion, dislodging her words like a buzzing gnat circling him. His expression is simultaneously bored and annoyed.

“You’re no fun.” He spins as he says it, a fluid, elegant motion. Peter blurs, and Wendy thinks he’s about to leave, but instead he seizes Jane’s hand. “Never mind. I’ll take this Wendy instead.”