Two separate cat species collide in the cosmos to tackle one shared mission: survive deadly virus attacks while thwarting the tyrannical schemes of power-hungry leaders.  Zahra and Orion have misled the felidors of exoplanet Kapteyn b, assuring them they can achieve immortality if they merge with a different species to counteract the virus. Felidors are more advanced than felines and have achieved intergalactic space travel along with language assimilation skills.

Meanwhile, felines on planet Earth face a horrible virus themselves. Their future is just as dire as the felidors.  Now, only one shelter houses cats that are still infection free, but time is running out. Inside this facility are two caged cats.  Donovan from Kapteyn b and Khan from planet Earth.  They become fast friends and allies.  What will happen to them?

Five extraordinary felidors are led by Artema in a fight to maintain goodness and equality on their home planet and beyond.  Follow the action in this explosive novella series as Rhea, an almighty cat god of the universe, battles her evil sister Hecate’s takeover attempts!

CHAPTER ONE
Exoplanet Kapteyn b

Exoplanet Kapteyn b is located 12.8 light years from planet Earth.  It orbits Kapteyn Star, a red subdwarf.  For years, astronomers on Earth have believed life could exist on this exoplanet if the presence of an atmosphere could be confirmed, but they have been unable to provide substantial evidence.

Scientists are unaware a mutant feline species has evolved for eons on Kapteyn b.  They call themselves felidors.  They are similar, physically, to felines on planet Earth, but their mental and physical abilities are much further advanced.  Able to walk upright or on all four paws, felidors can speak the language of alien life forms by assimilating any spoken dialect through the use of tiny intellisensors embedded behind their ears.  They also utilize anatomical kinesis for self-transportation of their corporal bodies.  Interstellar space travel is accomplished by simply turning into supercharged particles, capable of streaking across the cosmos at the speed of light, and then reforming those particles when desired.

Zahra is the tyrannical leader of the felidor society.  He is an abnormally large orange tabby with two heads that constantly turn and observe his surroundings and subjects. The remaining felidor population fears him.  Zahra has promised them immortality if they can successfully crossbreed with an alien species on a different world.  Thus far, all prior attempts have failed.  Each wasted attempt has taken a life from the felidor’s nine-life allotment.  Zahra is not pleased and is growing increasingly impatient.

The largest community of felidors is located in the area known as Nebula, a sprawling city which houses diverse family units.  The parents' mission in these units is to raise their offspring so they can carry out Zahra’s master plan of intergalactic space travel and procreation.  Their young are being rigorously trained. They must succeed where their parents have failed.  Only the strongest advance to the next round of examinations.

As the testing proceeds, five prospects have moved to the top of the chain and have become best friends.  Donovan has ebony fur and green eyes.  He is constantly aware of his surroundings and possesses great strength.  Iris has large eyes that change color and a long, white coat.  Vinca is a small-bodied, female calico with blue eyes.  Xanadu is a tortoiseshell breed with amber eyes containing flecks of burnished gold.  He loves to take risks. Finally, Artema, whose alabaster eyes are paired with a coat of soft grey, is the oldest and was born to lead.

These particular young felidor offspring are special because they all possess a unique component in their blood which has endowed them with super felidor power.  They are amongst a handful of adolescents who possess this special element.  Their predecessors who traveled to other worlds did not possess a genetic advantage of this magnitude. When they attempted to crossbreed, the hybrid beings died within a few days of being born.  They never made it back to their home planet.

The elder felidor researchers have been unable to replicate the same blood makeup these cats have.  They have informed Zahra they are preparing them to do what has not been done before.

Zahra, with his own proprietary superpowers, has catapulted many aspects of the felidor’s evolutionary progression, but he expects something in return.  Felidors are responsible for earning their own immortality in the universe.  If they can’t figure out how to merge with other life forms their place in the cosmos is not guaranteed.  Zahra will be forced to take severe measures, particularly when it comes to retaining his dominating tactics.

Kapteyn b has been impacted by meteorites in the past.  Prior civilizations have been obliterated as a result of these massive collisions.  Nebula is the last city remaining on the ravaged terrain.  The migration of felidors to a different life-sustaining world has become imperative.

THE FIVE BEST FRIENDS get together after their rigorous weekly lab testing is complete.  All young felidors are allowed to spend their weekends socializing and interacting with each other.

Donovan is usually the one who suggests they race to the Zenith Zone.  The Zone is not only a place for adolescent cats to go for recreation, but the challenging competitions held there also showcase the best candidates for further missions into the cosmos.

“Come on, guys!  The last one to the Zone has to do my stupid lab report for me.”

Donovan’s long legs stretch out in front of him as he gains speed.  He glances back at his friends for a split second just long enough to divert his attention from the large, serpentine chloropod that blocks his path.  He tries to stop his forward progress but instead runs headfirst into the plant, tumbling head over heels onto the dusty surface of the well-traveled pathway that leads to the Zone.

His friends can hardly contain their laughter as they pull up and watch him slowly regain his feet.  Instead of his normal, beautiful black coat, he’s covered in grey dust.  He sneezes three times in a row and spits out the dirt that filled his mouth when he landed hard on the trail. ... 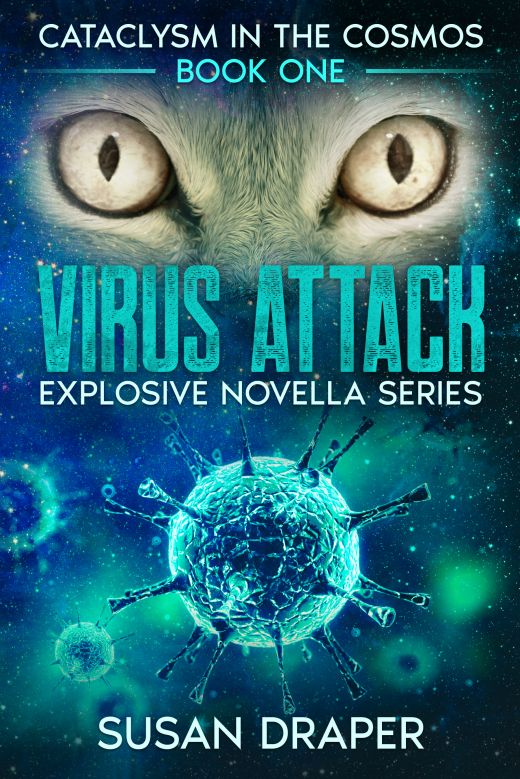