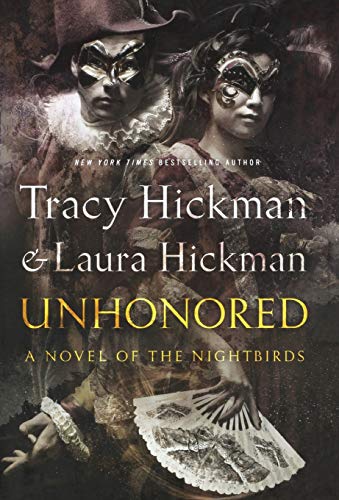 Unhonored is the second book in the intriguing gothic novel in the Nightbirds series from the partnerships of New York Times best selling author Tracy Hickman and Laura Hickman. This gothic fantasy series begins with Unwept.

Ellis Harkington is trapped in limbo between life and death, struggling to escape the domination of an evil force masquerading as her friend, Merrick. Only Ellis has ever escaped him, and now that she has discovered the truth, he wants to make sure she can never escape again.

Merrick's dark power has turned the seaside town of Gamin, Maine, into a place of nightmares. The town is transformed into a decaying succession of infinite rooms, bottomless stairwells, and boundless corridors filled with never-ending masquerades, balls, and banquets. Each pageant is about the life Ellis lived before her return—each revelation more terrifying than the last.

Ellis is desperate to find her missing cousin and leave, but there is no exit from the House of Dreams except, perhaps, through a séance to contact the living.