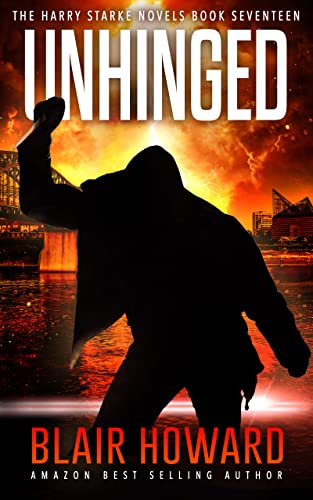 There’s something strange going on at Clearwater Psychiatric Hospital.

Director Dr. Norman Gill has a list in his desk drawer. He keeps it locked away. It’s for his eyes only. The list has seven names, with seven dates.

Seven deaths in eleven months. Harry Starke will have to sharpen his skills for this one. Is there a lunatic loose in the hospital? A staff member, a patient? Does someone else have a list, and if so . . . how many names are on it?

Get your copy and start investigating!

Doctor Norman Gill was in one of those moods. He was seated at his desk in his office reading over the last of his notes on his patients of the day, and he was tired. Fatigue pulled at him, and his eyelids were heavy. It had been a long day.

He hit save on the document in front of him and closed his laptop with a snap, thinking he needed a pair of those special glasses. What were they called again? Ah, yes, blue light filters… Or something like that. He was spending more and more time in front of these computer these days and that irritated him.

Gill looked around his office. It was plush, comfortable and inviting. His desk was large, but not overly so. His chair was expensive; Moroccan leather. The rest of the furniture… also expense, but tasteful. The shelves behind his desk on the wall facing him were lined with books. Real books! The embossed letters on the cloth bindings shone in the golden light of the small lamp on his desk. Many of them were classics. Many of them he hadn’t read. In fact he hadn’t so much as picked up a real book in more than two years, and why would he when they were all available on his computer, tablet or phone? Everything was on a computer! And he hated it, but he was like most of his patients, addicted to it.

Tastefully… or was it strategically, placed among the books were a number of small, indoor plants in faeu pre-Columbian clay pots from Mexico… or South America or… wherever… a contribution from Valerie. She said having living plants around the office was good for his soul.

Gill smiled. Imagine, a couple of distinguished psychiatrists - the best in Tennessee, so he thought - highly-educated professionals, beating on about how they missed reading real books and needing glasses with blue light filters and how putting a plant or two around the office was good for the soul.

He shook his head. I’m getting silly again, he thought. He always did when he worked late, which he did most evenings. He sighed and picked up the tumbler next to his now-closed laptop and sucked down the last of his vodka and tonic. Thank god it’s Friday night.

He stashed the tumbler away in his desk drawer next to the bottles of vodka, gin and fifteen-year-old scotch. He kept the drawer locked, obviously, so no one would give him grief about his little stash, and started packing up his belongings in readiness for a long weekend. Maybe he’d drive into Chattanooga tomorrow and see a show at the Tivoli. What’s on, I wonder? Or, hell, I could drive up to Nashville. Turn his cell phone off, and just get away.

He was smiling as he gathered up his things and turned off the desk lamp. Work had been particularly stressful lately. So yeah, he decided. I’ll go for a drive tomorrow, get the hell out of Dodge. Hole up in Nashville for a few days.

With his briefcase in one hand and his laptop securely under his arm, he stepped out of the office and pulled the door closed behind him. As he was locking his office door, Klaus eased by with his small cart loaded with tools and cleaning supplies. Klaus was one part janitor, two parts maintenance man.

“Ready to call it an evening, then, Doctor?” Klaus asked with a smile.

“You’ve got that right, Klaus,” Gill replied as he withdrew the key from the lock. “How late you staying?”

“Ah, I have a few loose ends remaining,” Klaus said in his slightly German accent. “But I’ll be leaving soon, I think.”

Gill walked briskly down the hallway toward the main entrance of Clearwater. He always walked quickly when he was leaving for the day, afraid someone would stop him just as he was about to leave. Those last-minute emergencies almost never were nearly as urgent as people tried to make them sound.

One of the new security guards was seated behind the reception desk, nodding off. Gill glared at him, then realized he didn’t know the man’s guard’s name. Damned if I’m going to stick around long enough to ask him tonight, he thought.

He looked up. The sky was filled with twinkling stars. It was a beautiful night. Maybe I’ll take that drive tonight instead of in the morning, he thought. I can pack a few things and be in Nashville before sunrise. Maybe sleep all morning in a hotel suite somewhere - somewhere nice - and then maybe get a few bottles of wine…

Gill cursed under his breath as he stopped in the middle of the parking lot. Shit! I was so close.

As he turned, he saw one of the nurses running down the steps toward him. She’s one of the younger ones, he thought. Her name’s Samantha… I think. Yes. That’s it. Everyone calls her Sam.

“This had better be important, Sam,” Gill said. “I was just thinking of…” He trailed off when he saw there were tears in the young woman’s eyes. “What is it? What’s wrong?”

“There’s been another one, Dr. Gill.” Her face was twisted with fear and sadness.

“Oh…” Gill closed his eyes for a moment then opened them again and continued, “Oh my God.” He didn’t want to go back in there. I can’t handle this again, he thought. Not tonight.

He saw in Sam’s eyes all he wanted to see… the horror she’d already witnessed. And he knew it was a bad one.

“Okay…” He took a deep breath. “Alright. Let’s go.” And together they walked together back into the hospital. Sam said not a word. Gill wanted to scream and turn and run.

“You found the patient, I take it?” he asked as they walked quickly up the steps.

The Room 14 was open. The security guard, the one who’s name Gill couldn’t remember, was standing to one side of the doorway.

“Keep the door shut, for Christ’s sake!” Gill whispered harshly, suddenly aware of all the rooms with sleeping patients in them. “What if someone walks by and happens to look inside? You know how people are. And what of patient privacy?”

The guard had a phone in his hand. “I called the sheriff’s office, Doctor.”

Gill wished he hadn’t done that. But he said nothing. What was done was done.

He stood in the open doorway, taking in several deep breaths. He hadn’t looked inside yet; not really. But he couldn’t help but see the dark mass on the bed.

“I’ll take a moment to inspect the patient,” Gill said. “But we must keep this door closed, you hear me?”

Both the guard and Sam nodded.

Gill stepped inside, closing the door behind him. The room was almost dark, the only light coming from the open bathroom door.

He stood for a moment, drew himself up to his full six-feet-one-inches, took a couple more deep breaths, deemed himself ready and flipped on the light.

The first thing he saw was the blood; oh so much blood.

It was pooled and congealing into a thick goo all over the floor, so much so that realized he’d have trouble approaching the bed without stepping in it.

The patient was a middle-aged black woman named Donna… or was it? No. It was Doris. He was sure of it.

Doris was staring up at the ceiling with wide, lifeless eyes. Tears had left little tracks down the sides of her face.

Her left arm hung from the bed. Her wrist was cut from one side to the other; a single a deep gash. A long, mucus-like strand of blood still hung from her middle finger, stretching slowly to the bloody floor.

The fingers of her right hand were bloody. The hand itself lay open on top of the spread. Lying next to her fingers was a razorblade. There were blood splatters everywhere: on her otherwise white pajama top, on the bed, on the walls, even on the ceiling.

Without stepping any closer, Gill looked at her. He looked around the room, taking everything in. She was obviously dead and it was clearly suicide. And there was clearly nothing Norman Gill could do about it now except preserve the scene.

He put his head in his hands. Deep breaths. Take deep breaths, Norm.

Finally, he took a step back, turned off the light, opened the door and backed out, closing the door behind him, and turned around to finding two more nurses had joined Sam and the guard. Inwardly, he sighed. It was going to be a long night.

“All right, everybody,” he said in a quiet voice. “Our priority now is to not disturb the other patients. I’m sure a deputy will be by soon. I’ll talk with him. Although, I’m sure he’ll want to talk to you too, Samantha. Otherwise, it’s business as usual. And not a word of this to anyone. We’ll have Klaus help clean up once the deputy is done and a funeral director has been called. The patients cannot know. D'you all understand?”

Everyone nodded as Gill spoke. All except Sam.

Her eyes were still wide.

“Are you okay?” he asked, looking at her.

She nodded slowly. “I just can’t believe it, Doctor. This is the second one this month.”

He nodded in sympathy. She was new to the hospital. If you only knew the half of it, he thought.

The small group dispersed, except for the guard who stayed behind to make sure the door stayed closed until the authorities arrived. Gill walked slowly back to his office, deflated… defeated.

So much for going for a drive, he thought wistfully.

Back in his office he collapsed into his chair, unlocked the desk drawer and took out the tumbler, still wet from the earlier vodka tonic, and the bottle of vodka and poured himself a new one, heavy on the vodka and very light on the tonic.

From another drawer, Gill took out a slip of paper, set it in front of him on the blotter and using a pencil, he wrote down the date and added ‘Doris’ after it. Then he sat back, stared at the list on the slip of paper and took a large swallow of his drink.

“Too many,” he muttered and took another sip of his drink.

What the hell’s going on in my hospital?

Unable to face that thought, he emptied his glass, poured himself another and began to prepare for his interview with the deputy.