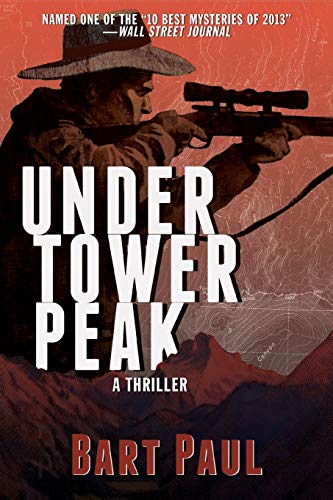 his tautly written debut thriller was named one of the 10 Best Mysteries of 2013 by the Wall Street Journal.

After two tours as a sniper in Iraq, Tommy Smith has returned to his former life as a cowboy and wilderness guide in California’s Sierra Nevada, hoping to reclaim the simplicity of his youth and heal the wounds the world can’t see. When, high on a mountain pass, he and his partner find the wrecked plane of a billionaire adventurer who disappeared months earlier, a seemingly innocent act triggers a breathtaking cycle of violence that threatens Tommy’s world. Soon he is enmeshed in the struggle between the billionaire’s trophy wife and wannabe drug lord son and their allies. Every effort to set things right draws him deeper into a bad situation and closer to needing those deadly skills that he had hoped to leave behind forever.

With lean, efficient prose and dialogue that crackles with repartee, Bart Paul has written a contemporary thriller of steadily mounting suspense and ruthless action. He captures both the beauty of the high mountain wilderness and the laconic rhythms of the outfitters’ lives. In Tommy Smith he offers a protagonist whose cool competence, home-grown decency, and clarity of purpose in the face of danger suggest a brotherhood with heroes from the likes of Ernest Hemingway and Cormac McCarthy.

"Under Tower Peak has everything I look for in a thriller – big characters, big action, sharp dialogue and the magic of place." — T. Jefferson Parker

"(W)riting reminiscent of Cormac McCarthy and James Lee Burke – all the while layered with lush, keenly observed descriptions of the natural world and man’s place in it." — Kirkus Reviews

"A superior blend of thriller and contemporary western, full of gun lore and with a fine appreciation of the Sierra Nevada. And Paul’s spare, reflective style recalls Hemingway." – Booklist starred review.