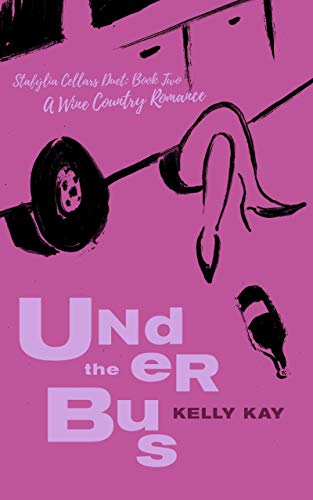 Under The Bus is the second book of the Stafýlia Cellars Duet and should be read after Over A Barrel.

A friends-to-lovers story about brash and bold Vintner Tabitha Aganos and US Senate Candidate Baxter Schroeder. Two lifelong friends who think they can ignore fate. But something is coming that will make them reevaluate everything.

Bax
Hurricane Tabi dominates my campaign bus as well as the world around her. Just like I knew she could. We're clicking as friends and coworkers. Tabi's stepping into her own light and commanding my campaign staff with ease and grace. It fills my soul to watch.

But I never expected to need my best friend even more. I never wanted to admit how empty my life is without Tabi filling every moment of it. I have a campaign to run. A destiny to fulfill. I have the life I planned, but the life that's calling to me is getting too loud to ignore. We've finally put our steamy and stormy past behind us.

But that's the thing about the past. It never stays there.

There's a threat to my candidacy, our relationship, and my future, and finally, choosing the path not taken might just save us all.

What is it they say about love?

Under The Bus is the second book of the Stafýlia Cellars Duet.
A Five Families Vineyard Series.

Set all over California and centered in Sonoma's Wine Country, Under The Bus tells the story of lifelong friends who can't stop crossing the line.

BAX: I’m already regretting this. I’d like to point out I told you so.

TABI: Shove it. You’re welcome. Occasionally you’re right. Don’t get used to it.

BAX: Can you get me today’s speech, please?

TABI: Check email before you waste our time with useless questions.

TABI: You keep thinking that. You’ve only ever been the boss of me in one place.

TABI: And other various beds. Moving on— A quick note. I might have told my dad to fuck off. He’s going to need like a year to cool off.

BAX: TABITHA! You’re supposed to be showing him you’re capable of not rebel against him yet again. You’re going to make me smooth it over, aren’t you?

TABI: That was my plan. Thanks. Please.

He never says no to me.

“You don’t belong here.” My blood freezes as the icy words fall from Shawna’s lips. I’m exploring Baxter’s campaign bus. I’ve only been on bus two and was curious. I didn’t know the frigid fiancée was here. Her sentence punches me in the ego, but I won’t let her see it.

“I’m simply placing his schedule for the day. I have a copy for you too.”

She pops a hip. I take in her tight blonde bun and brown slacks. I don’t think I’ve ever owned slacks. I was told today was a casual day so I’m in jeans and a t-shirt. I can see now that it’s slacks casual, not Tabi casual.

“We prefer electronic schedules. And you shouldn’t be unsupervised on this bus.”

“Afraid I’m gone grift some shit for eBay?” I laugh. She doesn’t.

She blocks my escape. I walk right up to her, put my hands on my hips, and strike a superhero pose. I push out my boobs like a forcefield to protect me from my frosty foe.

“I’m afraid of everything you’re going to do. Don’t get too comfortable.”

My blood rushes as I see him out of the bus window shaking hands with the drivers. I swallow all my hostility as I say, “Truce. For Bax.”

She purses her perfectly lined lips and says, “An alliance. But I’m watching.”

“I have no doubt. Now move your Peloton ass out of my way. Please.” I grin and push past her. She huffs, but I’ve stopped listening. I squeeze Bax’s arm, and he puts his hand over mine and continues talking on his phone. His smile follows me all the way to my bus. People are settling in and I dump my messenger bag in the back. There’s a small table here instead of the bed that’s on Bax’s bed. It’s supposed to be my office, but I’m not sure I deserve that much privacy when twenty of us will be scrambling for a bit of quiet space.

Jack exits the bathroom. “What’s with the face?” I shake my head trying to paste on a new one.

“Queen Frostine banished me from bus one.”

He smirks and rolls his eyes. “Bullshit. I’ll take care of her. Let’s go. Time to face them.”

Everyone’s settled. I look down the long barrel of this campaign bus and can’t believe I’m about to pull the trigger on a career I never wanted, I’m not qualified for, and have no clue how to begin doing. My Chuck Taylors squeak as I walk the length of the bus because there’s a slight stickiness to the floor. I turn to face everyone on the bus. Jack is tall and gruff at my back. His voice booms above the din of the murmurs and all eyes snap forward. I give a halfhearted wave like I’m trying to be folksy or some shit. Jack laughs at me under his breath. I talk to myself. Ok, I can do this.

“This is Tabitha Aganos for those of you not paying attention. When she speaks, imagine it’s me.” He sits and I follow suit. I poise my pen over my iPad as Jack stretches his long legs out in front of him and tucks his hands behind his head.

“Everybody fed? Fat and happy, and you got a good carb buzz going?” The bus has standard seats at the front, but most of them are in sets facing each other with really cool pull-out desks. There are two heavily lacquered wood tables on either side towards the back, with four bolted chairs for mini meetings. Jack Stockman is Bax’s campaign manager, and roommate from college. My new boss sounds like he could easily play the chief of police in a TV cop drama. He’s a tall, slender, rugged man with dark hair, and mischievous dark eyes. I’m up to date on what he expects of me, but I’m still treading water.

He winks as I begin to panic. “Message of the week, anyone?” I jot notes, mostly scribbles, to look like I’m writing something important.

The well-dressed guy with the fabulous smirk answers from the back, “Baxter is different.” There’s a smug looking idiot on his left who rolls his eyes. So far, I don’t like that guy. Does something in finance and he was hired by Shawna. Blech.

Jack screams, “Holy muthafucking shit, someone read the memo. You go to the top of the class. Open-minded. Forward thinking. Earnest. Not status quo. Likeability. We’ll get to platform shit next week. Focus on getting people to know the Baxter we all love, and care for.”  There’s a meek girl in the back Jack seems to be ignoring. I point to her.

“I’ve never met Mr. Schroeder. So how…?” I nod to Jack. He grins. We already have a rhythm.

“You will. He’s the boy scout you’ve been waiting for. The daddy California needs to stand up for us as well as punish us when we’re bad. But none of that matters because you must already believe in him, or you wouldn’t be sitting here with ketchup down the front of your shirts not knowing what hotel we’re pulling into tonight. You’re nervous. I’m terrified. I’m unsure of everything about this job except one thing: Baxter Schroeder was born to do this. He bleeds not just red, but white and blue as well. Eagles fly out of his ass when he farts.”  There are laughs, but I draw them back in. “Hey, everybody, go ahead and worry about rain at a gathering, whether Mercury goes into retrograde or whether you’re missing some family milestone. But don’t worry about why you’re here. He’s exactly who you think he is. He’s incapable of pretending.”

There’s silence and Jack nods at me. “Lucy’s right. Get your asses in gear, we have a shit-ton of shit to do. Start talking, tweeting, writing, posting, and making sure every single voter, and volunteer, feels the message this week. Understand?” Everyone nods.

The guy from the back stands up. “We’re ready.”

“Good. I’m going to proctor this run down, but Lucy these meetings are yours from now on.” Everyone looks confused. Bax’s college nickname is Beethoven. Apparently, I’m the Lucy to his Schroeder.

He winks. “And no one calls her Lucy but me. What’s next?” I sit down and take in a deep breath. I feel itchy not being around the vines, but I could get used to people listening when I speak.