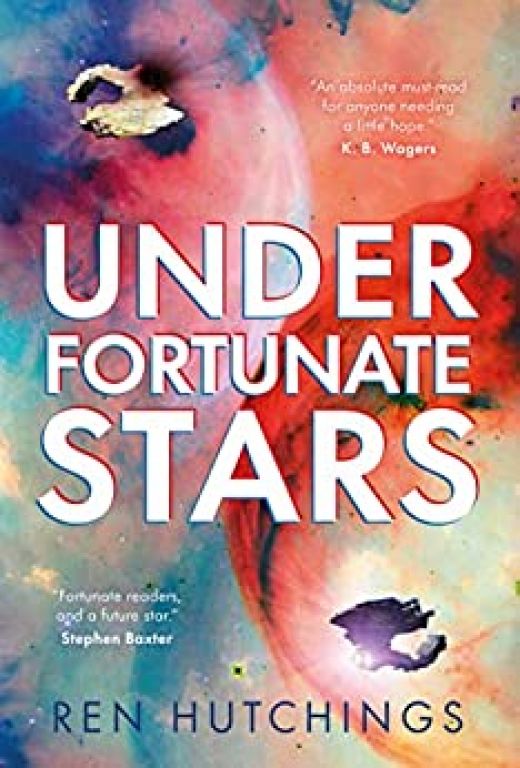 Stranded in the Dark

In the final throes of the generations-long war with the alien Felen, smuggler Jereth Keeven’s junk freighter breaks down in a strange rift in deep space, with little chance of rescue – until they encounter a science vessel that claims to be from 152 years in the future.

Engineer Uma Ozakka has always been fascinated with the past, especially the desperate peace mission that ended the war with the Felen and ushered in a new age of collaboration – a mission Keeven’s first mate Leesongronski is supposed to be leading right now.

If Ozakka is right, more than the fates of two ships hangs in the balance… 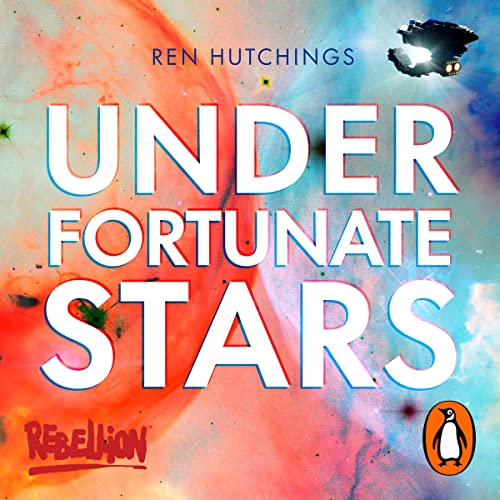 The thing about luck, Jereth told himself, is that it always turns. Eventually.

He knew he was taking a foolhardy gamble when he threw the packet of oversalted snack cakes into the middle of the table—especially after he’d already lost two rolls of pepper-candy and a quarter-tin of spiced fruit. His chances of winning a game against Leeg were infinitesimally small. Still, there had been those few occasions when he’d snuck a win, when a particularly lucky run of tiles had thwarted Leeg’s mathematical machinations.

He was almost surprised when Leeg turned over the winning tile again.

“Oh, what a shock,” Leeg said drily. “Who could’ve predicted?”

“Damn it, I really thought I had you that time!” Jereth tossed his useless tiles on the table. “I had a wild three! Gods. I forgot how impossible you are.”

“Just shut up and take your winnings.” Jereth laughed and shoved the pile of food toward Leeg. Given their current odds of long-term survival, it hardly seemed to matter that he’d just gambled away the last of his snacks.

Leeg picked up the packet of cakes from the top of the pile, examining it disdainfully. He tore open a corner, removed one salt-encrusted disc and bit into it with a grimace.

“Ugh. This stuff tastes like salted earwax. You got anything else you want to lose?”

“Forget it. I’m all out of snacks. And if you think I’m playing you for money, you’re out of your mind.” Jereth ran a palm over the table, rounding up the game tiles and sweeping them back into their pouch.

“Well... in that case, I guess I’ll go to my bunk,” Leeg said. He collected a stray tile and flicked the little hexagon in Jereth’s direction. “Oh, wait... no I won’t. I’ll go lie down on the floor, because we haven’t got bunks anymore.”

The Jonah was a small cargo hauler that had seen too many years in space. The ship’s tiny living area fit only the loosest possible definition of sleeping quarters: three cramped compartments in the wall, each hidden by a metal door with just enough room behind it for a narrow pallet and some shelving. It was uncomfortable at the best of times, but now that there were five people on the ship, the situation was downright claustrophobic.

Their hired engineer, Mendeg, had a contract that promised private sleeping quarters, so he had the compartment furthest from the bridge. The passenger they’d picked up, Keila, was paying a generous fee that warranted some semblance of hospitality. They’d given her the middle bunk, the one that used to belong to Jereth. The final bunk—Leeg’s—was now occupied by their unexpected prisoner.

Leeg had argued that surely the prisoner should be sleeping on the floor instead of him. But the bunk doors, flimsy as they were, could be locked shut. So Jereth and Leeg were relegated to sleeping on a tattered red blanket in the bridge.

Leeg cast a miserable look at the three closed compartments where the others were sleeping soundly. “Must be nice to have a bed to sleep in, huh? Not that the beds in this junk-heap are that much better than the floor.”

“Can you give me a break?” Jereth sighed. “It’s only a couple more days. And I’m sleeping on the floor, too. What do you want me to do?”

“Would it matter if I told you? You never listen to me anyway,” Leeg said. “I’m still trying to comprehend why you decided to pick up a hitchhiker.”

“A passenger,” Jereth corrected. “A very well-paying one.”

“A complete stranger! Who clearly had some kind of run-in with the authorities—”

“She offered twenty-five thousand, Leeg. Come on. It’s not like I could turn that down! We could use some extra money for insurance, in case we run into any more unforeseen circumstances.”

“You mean like when we got hijacked?” Leeg rolled his eyes.

“Almost got hijacked,” Jereth said. “I took care of it, didn’t I? Everything’s fine.”

“Sure. Everything’s fine, in the sense that we’ve now got a prisoner locked in my damn bunk,” Leeg muttered. “This is a marginal improvement over the day I had a gun to my head. The only thing that’s nearly killed me today is boredom.”

“You’ll get your bunk back, okay? I promise. As soon as we get to Zora Outpost.”

Leeg nodded, but he was silent for a long time after that. He chewed quietly on the rest of the crumbling snack cake, his eyes distant.

Leeg wasn’t much older than Jereth, but the years had worn heavily on him. His dark ponytail was shot through with silver now, his temples almost entirely greyed. His ash-pale cheeks were hollower, and his rare smiles seldom reached his eyes. But he was still the same Leeg who had risked everything with Jereth once. The same Leeg who, despite everything, was willing to do it again.

Jereth glanced back at the airlock leading to the ship’s hold. Beyond it loomed the ominous crates of their cargo: components for a black-market planetary defence system. Supplies bound for an unauthorized venture-ship heading outside Union space, away from this unwinnable war with the Felen, away from the inevitable collapse of human civilization.

It would be Jereth’s final reckless gamble, if it wasn’t already too late.

The word at the last outpost hadn’t been good. There were whispers that a Felen fleet was holding Etraxas under siege, and he suspected it was true. There was a certain bitter satisfaction in the knowledge that even the Union’s wealthy, self-serving capital wasn’t invulnerable. Etraxas deserved the same fate as the fledgling worlds they’d left to wither under the alien onslaught. After the way the Union had forsaken the desert settlements, left them unprotected until it was time to raid the ranks of their young for more soldiers—

Jereth clenched his teeth, taking a moment to dispel the familiar rage before it had a chance to crystallize in his chest. Leeg’s voice broke the silence.

“Hey... was that light up there always blinking? What is that?”

He went up the scuffed steps into the bridge to retrieve the message. It unfurled haltingly onto the viewscreen:

SECTOR ADVISORY—URGENT. Zora Outpost has been destroyed, lost to Felen hostilities. All civilian ships are strongly advised to avoid the area and use an alternate route.

Jereth swallowed hard, staring at the grainy screen. He balled his shaking hands into fists and braced them against the sides of the console.

“Change of plans.” Jereth didn’t look back at Leeg. “Zora’s out. We’ll have to take a detour.”

He tried to dismiss the message, but Leeg was already behind him, leaning over his shoulder.

Jereth forced his hands back to the controls. He called up the sector maps and started to piece together a new route, avoiding whatever might be left of Zora Outpost. At least a dozen new orange zones had bubbled up on the map, marking sightings of Felen skirmishers.

Jereth hoped Leeg wouldn’t comment on how closely their new route dipped toward those swathes of orange. He glanced back at the three bunk doors, saw they were still shut, and exhaled. No need to discuss this with the others. Not yet.

“Look... think of it this way,” he said, finally meeting Leeg’s eyes. “Maybe we’re getting all our bad news out of the way early on, right? Luck’s got to turn eventually.”

“There’s no such thing as luck, Jerry.”

The Jonah’s skim engines rumbled as the ship accepted Jereth’s course change, and the navigation display spun to their new heading.

Jereth forced a smile. “Trust me. From now on, everything will go just fine.”

And then, every light, display and console on the Jonah’s bridge winked out at once as the skim engines stuttered and jolted into a sudden shutdown.

So much for luck.