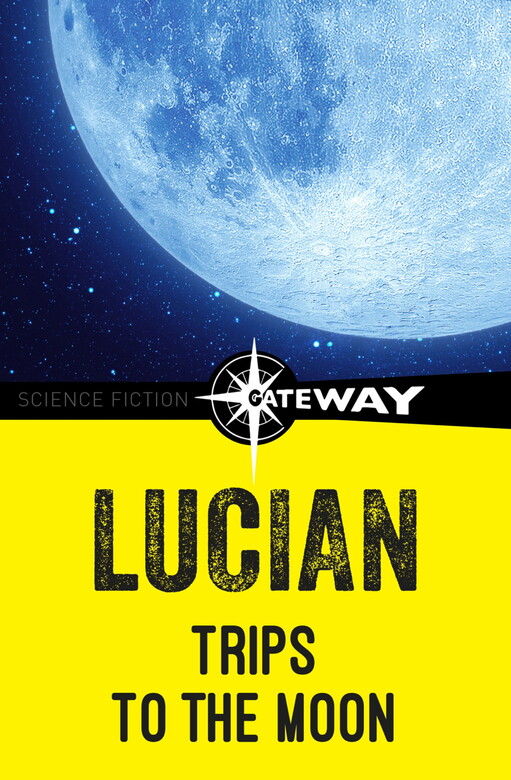 The endeavour of small Greek historians to add interest to their work by magnifying the exploits of their countrymen and piling wonder upon wonder, Lucian first condemned in his "Instructions for Writing History," and then caricatured in his "True History," wherein is contained the account of a trip to the moon.

Lucian, in Greek Loukianos, was a Syrian, born about the year 120 at Samosata, where a bend of the Euphrates brings that river nearest to the borders of Cilicia in Asia Minor. He had in him by nature a quick flow of wit, with a bent towards Greek literature. It was thought at home that he showed as a boy the artist nature by his skill in making little waxen images. An uncle on his mother’s side happened to be a sculptor. The home was poor, Lucian would have his bread to earn, and when he was fourteen he was apprenticed to his uncle that he might learn to become a sculptor. Before long, while polishing a marble tablet he pressed on it too heavily and broke it. His uncle thrashed him. Lucian’s spirit rebelled, and he went home giving the comic reason that his uncle beat him because jealous of the extraordinary power he showed in his art.

After some debate Lucian abandoned training as a sculptor, studied literature and rhetoric, and qualified himself for the career of an advocate and teacher at a time when rhetoric had still a chief place in the schools. He practised for a short time unsuccessfully at Antioch, and then travelled for the cultivation of his mind in Greece, Italy, and Gaul, making his way by use of his wits, as Goldsmith did long afterwards when he started, at the outset also of his career as a writer, on a grand tour of the continent with nothing in his pocket. Lucian earned as he went by public use of his skill as a rhetorician. His travel was not unlike the modern American lecturing tour, made also for the money it may bring and for the new experience acquired by it.

Lucian stayed long enough in Athens to acquire a mastery of Attic Greek, and his public discourses could not have been without full seasoning of Attic salt. In Italy and Gaul his success brought him money beyond his present needs, and he went back to Samosata, when about forty years old, able to choose and follow his own course in life.

He then ceased to be a professional talker, and became a writer, bold and witty, against everything that seemed to him to want foundation for the honour that it claimed. He attacked the gods of Greece, and the whole system of mythology, when, in its second century, the Christian Church was ready to replace the forms of heathen worship. He laughed at the philosophers, confounding together in one censure deep conviction with shallow convention. His vigorous winnowing sent chaff to the winds, but not without some scattering of wheat. Delight in the power of satire leads always to some excess in its use. But if the power be used honestly—and even if it be used recklessly—no truth can be destroyed. Only the reckless use of it breeds in minds of the feebler sort mere pleasure in ridicule, that weakens them as helpers in the real work of the world, and in that way tends to retard the forward movement. But on the whole, ridicule adds more vigour to the strong than it takes from the weak, and has its use even when levelled against what is good and true. In its own way it is a test of truth, and may be fearlessly applied to it as jewellers use nitric acid to try gold. If it be uttered for gold and is not gold, let it perish; but if it be true, it will stand trial.

The best translation of the works of Lucian into English was that by Dr. Thomas Francklin, sometime Greek Professor in the University of Cambridge, which was published in two large quarto volumes in the year 1780, and reprinted in four volumes in 1781. Lucian had been translated before in successive volumes by Ferrand Spence and others, an edition, completed in 1711, for which Dryden had written the author’s Life. Dr. Francklin, who produced also the best eighteenth century translation of Sophocles, joined to his translation of Lucian a little apparatus of introductions and notes by which the English reader is often assisted, and he has skilfully avoided the translation of indecencies which never were of any use, and being no longer sources of enjoyment, serve only to exclude good wit, with which, under different conditions of life, they were associated, from the welcome due to it in all our homes. There is a just and scholarly, as well as a meddlesome and feeble way of clearing an old writer from uncleannesses that cause him now to be a name only where he should be a power. Dr. Francklin has understood his work in that way better than Dr. Bowdler did. He does not Bowdlerise who uses pumice to a blot, but he who rubs the copy into holes wherever he can find an honest letter with a downstroke thicker than becomes a fine-nibbed pen. A trivial play of fancy in one of the pieces in this volume, easily removed, would have been as a dead fly in the pot of ointment, and would have deprived one of Lucian’s best works of the currency to which it is entitled.

Lucian’s works are numerous, and they have been translated into nearly all the languages of Europe.

The “Instructions for Writing History” was probably one of the earliest pieces written by him after Lucian had settled down at Samosata to the free use of his pen, and it has been usually regarded as his best critical work. With ridicule of the affectations of historians whose names and whose books have passed into oblivion, he joins sound doctrine upon sincerity of style. “Nothing is lasting that is feigned,” said Ben Jonson; “it will have another face ere long.” Long after Lucian’s day an artificial dignity, accorded specially to work of the historian, bound him by its conventions to an artificial style. He used, as Johnson said of Dr. Robertson, “too big words and too many of them.” But that was said by Johnson in his latter days, with admission of like fault in the convention to which he had once conformed: “If Robertson’s style is bad, that is to say, too big words and too many of them, I am afraid he caught it of me.” Lucian would have dealt as mercilessly with that later style as Archibald Campbell, ship’s purser and son of an Edinburgh Professor, who used the form of one of Lucian’s dialogues, “Lexiphanes,” for an assault of ridicule upon pretentious sentence-making, and helped a little to get rid of it. Lucian laughed in his day at small imitators of the manner of Thucydides, as he would laugh now at the small imitators of the manner of Macaulay. He bade the historian first get sure facts, then tell them in due order, simply and without exaggeration or toil after fine writing; though he should aim not the less at an enduring grace given by Nature to the Art that does not stray from her, and simply speaks the highest truth it knows.

The endeavour of small Greek historians to add interest to their work by magnifying the exploits of their countrymen, and piling wonder upon wonder, Lucian first condemned in his “Instructions for Writing History,” and then caricatured in his “True History,” wherein is contained the account of a trip to the moon, a piece which must have been enjoyed by Rabelais, which suggested to Cyrano de Bergerac his Voyages to the Moon and to the Sun, and insensibly contributed, perhaps, directly or through Bergerac, to the conception of “Gulliver’s Travels.” I have added the Icaro-Menippus, because that Dialogue describes another trip to the moon, though its satire is more especially directed against the philosophers.

Menippus was born at Gadara in Coele-Syria, and from a slave he grew to be a Cynic philosopher, chiefly occupied with scornful jests on his neighbours, and a money-lender, who made large gains and killed himself when he was cheated of them all. He is said to have written thirteen pieces which are lost, but he has left his name in literature, preserved by important pieces that have taken the name of “Menippean Satire.”

Lucian married in middle life, and had a son. He was about fifty years old when he went to Paphlagonia, and visited a false oracle to detect the tricks of an Alexander who made profit out of it, and who professed to have a daughter by the Moon. When the impostor offered Lucian his hand to kiss, Lucian bit his thumb; he also intervened to the destruction of a profitable marriage for the daughter of the Moon. Alexander lent Lucian a vessel of his own for the voyage onward, and gave instructions to the sailors that they were to find a convenient time and place for throwing their passenger into the sea; but when the convenient time had come the goodwill of the master of the vessel saved Lucian’s life. He was landed, therefore, at Ægialos, where he found some ambassadors to Eupator, King of Bithynia, who took him onward upon his way.

It is believed that Lucian lived to be ninety, and it is assumed, since he wrote a burlesque drama on gout, that the cause of his death was not simply old age. Gout may have been the immediate cause of death. Lucian must have spent much time at Athens, and he held office at one time in his later years as Procurator of a part of Egypt.

The works of Lucian consist largely of dialogues, in which he battled against what he considered to be false opinions by bringing the satire of Aristophanes and the sarcasm of Menippus into disputations that sought chiefly to throw down false idols before setting up the true. He made many enemies by bold attacks upon the ancient faiths. His earlier “Dialogues of the Gods” only brought out their stories in a way that made them sound ridiculous. Afterwards he proceeded to direct attack on the belief in them. In one Dialogue Timocles a Stoic argues for belief in the old gods against Damis an Epicurean, and the gods, in order of dignity determined by the worth of the material out of which they are made, assemble to hear the argument. Damis confutes the Stoic, and laughs him into fury. Zeus is unhappy at all this, but Hermes consoles him with the reflection that although the Epicurean may speak for a few, the mass of Greeks, and all the barbarians, remain true to the ancient opinions. Suidas, who detested such teaching, wrote a Life of him, in which he said that Lucian was at last torn to pieces by dogs.

Dr. Francklin prefaced his edition with a Life, written by a friend in the form of a Dialogue of the Dead in the Elysian Fields between Lord Lyttelton—who had been, in his Dialogues of the Dead, an imitator of the . . .