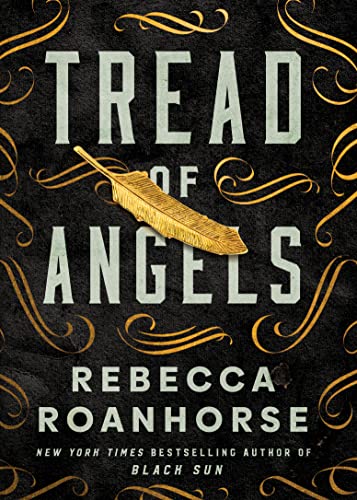 Celeste, a card sharp with a need for justice, takes on the role of advocatus diaboli, to defend her sister Mariel, accused of murdering a Virtue, a member of the ruling class of this mining town, in a new world of dark fantasy from the New York Times bestselling author of Black Sun, Rebecca Roanhorse.

The year is 1883 and the mining town of Goetia is booming as prospectors from near and far come to mine the powerful new element Divinity from the high mountains of Colorado with the help of the pariahs of society known as the Fallen. The Fallen are the descendants of demonkind living amongst the Virtues, the winners in an ancient war, with the descendants of both sides choosing to live alongside Abaddon’s mountain in this tale of the mythological West from the bestselling mastermind Rebecca Roanhorse. 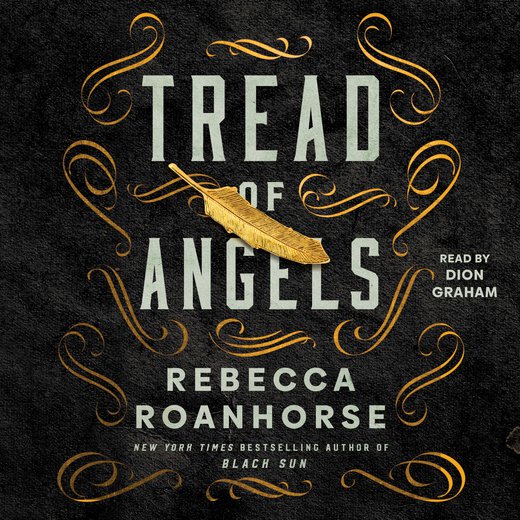 Chapter 1
CHAPTER 1
It was the devil’s hour on Aventum Angelorum, Goetia’s own high holy day, and there was a black wind blowing off Tabor’s mine. It slithered down the mountain past the places where the old gods of the continent had once held sway. It rolled through the mining town below, called Goetia, snatching hats off heads and shivering shoulders. It wormed its way through the holiday merrymakers on Perdition Street, whispering memories of heavenly war, of bright Lucifer’s doomed defiance, and the sweet aftertaste of rebellion cloyed noses and mouths, making those who breathed it in discontent and covetous.

When it hit the Eden, Perdition Street’s premiere gambling and drinking establishment, it nearly blew the place down. Wood hit sharp against wood as the front doors flew open, and the glass pane bearing the saloon’s moniker cracked straight through. The ruckus drew startled screams and cries of drunken surprise from the patrons, masked faces turning to see what, or who, had entered. A few of the witchier clientele threw a hex to turn evil away, but there was enough vice already squatting in the Eden that whatever extra ungodliness the wind blew in didn’t faze most of the regulars.

At first, Celeste Semyaza didn’t even feel that old wind licking against her cheek. She was sitting in the dealer’s chair at the faro table, focused on the game before her. But when the cards jumped up, kings and jack fools dancing wild in the sudden gale, she spread her hands across the cards to keep ’em down. The three players in front of her did the same, stretching arms and bodies over potential winners… and inevitable losers.

Hypatia, the owner of the Eden, six feet tall and built solid as one of those cursed-up mountains that encircled the town, rushed forward to secure the doors. She paused long enough to let a costumed couple slip through, the woman clutching the tip of a papier-mâché wing as the man, unsteady on high-heeled boots shaped like goat’s feet, leaned into her. They stumbled to the bar, where Zeke, the resident bartender, awaited them. But Celeste didn’t even notice them, already focused back on the card game.

“Place your bets,” she told the players now that the wind had quieted down.

An Elect man sporting a bowler hat and an impressive yellow mustache held his bet, gesturing for the other players to go first. Celeste eyed him, suspicious. He wasn’t one of her regulars, so she figured he must be in town for the holiday. Nothing unusual there, but he was worth keeping an eye on.

The man to Mustache’s right bore the Mark of the Fallen, that telltale ring of gold around dark eyes and a pair of curling ram’s horns. The Fallen man took the opportunity to lay down ten chips on the three of spades.

A mysterious woman in a wide-brimmed blue hat and matching veil extended a long-nailed hand to carefully set a dozen chips on the queen.

The revelry of the Eden had picked back up. The ill wind that had forced its way past the doors of paradise was quickly forgotten to the pleasure of gin slings and gambling. Somewhere nearby, a saloon girl laughed loudly.

The mustachioed man still hadn’t laid his bet, and Celeste tapped her fingertips against the felt loudly.

“Where’s that singer I heard about?” he asked with lazy indifference. His gaze flickered to the stage next to the piano on the far side of the room as his fingers tripped across a steadily shrinking stack of chips. “Heard she’s a beauty with an impressive set of—”

“That’s my sister.” Celeste cut him off.

“—lungs.” He glanced at the dealer, whistling low. “Well, I’ll be. Mariel Semyaza’s your sister? But you don’t have the…” He touched a finger to his eye.

He wasn’t the first to notice she didn’t have the Mark and wouldn’t be the last. “I favor our daddy.”

His face scrunched up, puckered sour as a lemon. “A half-breed, then? Well, well.”

Celeste kept a small dagger up her sleeve in a sheath attached to her forearm. It was an ingenious thing that Zeke had made for her, meant to shoot the blade down into her hand, hilt to palm, with just a twist of the wrist.

“Watch your tongue, Mister,” she said, low and matter-of-fact, “assuming you want to keep it.”

He had a dry, unpleasant kind of laugh, more wild dog than man. “Now, don’t get your back up.”

“Then don’t talk about my sister.”

“I’m only being friendly.”

“I don’t need friends. What I need you to do is place your bet.”

He sucked at his teeth, fingers still idling over chips.

Finally, the woman in blue spoke, her voice a soft, sibilant hiss. “Place your bet or make room for someone who will. You’re holding up the game.”

The Fallen man grumbled in agreement, so with a put-upon sigh, Mustache dropped half a dozen chips on the eight card.

Satisfied, Celeste drew the soda card and placed it to the side. Next, she drew the loser—an eight. Mustache groaned. He’d lost the round.

“Not your night, is it?” the Fallen man next to him observed lightly.

Celeste drew the winner, and the veiled player yawped a muted cry of joy before raking her winnings close. Celeste gave her a congratulatory nod and had begun to reset for the next round when she felt it. She thought for a moment maybe that wind had come on back, but the cards were as still as a spooked-up church mouse. Yet there was something at the back of her neck. A breath, a touch. She couldn’t describe it except to say it was a wrongness.

She glanced behind her, but there was only the wall. She told herself it was just the ten-cent man at her table getting under her skin, but even as she thought it, she knew it was a lie.

“We playin’?” the man in question asked, voice turned mean with losing.

She almost said yes, but her eyes cut to the empty stage, and the word stuck in her craw. Where was Mariel? Maybe that was the bad feeling that had caught hold of her neck. Mariel should have been up there singing, keeping the crowd cooled.

Celeste waved, trying to get Hypatia’s attention, but the woman was holding court at the corner of the bar, telling one of her infamous tall tales, and couldn’t spare a glance her way.

She scratched at her neck, unable to shake that bad notion, like someone was throwing a hell of a hex, and promptly said, “Table’s closed.”

A groan circled the table.

“The game’s not done!” Mustache’s outrage turned up a notch.

“It’s done when I say it’s done,” Celeste said. “There are other tables. Find yourself another if you don’t like it.”

“But I’ve got money invested in this one.” His voice was practically a shout, and people paused over their drinks or in the middle of their stories, noticing. His hand strayed down toward his belt, and Celeste saw the butt of a revolver there. She calculated the odds of the man drawing down on her on account of feeling cheated and decided she didn’t like them.

Her eyes flickered back to Hypatia. This time, the woman was watching.

“And I need a chance to win it back. I’ve got to get a ticket on that new airship to the capital, and this here’s only half of what I need.”

“Not sure that’s on the dealer,” the Fallen man said, eyes cutting in sympathy toward Celeste. “You’ve had poor luck all night, friend.”

“And your luck’s about to be worse if you don’t stay out of this, friend,” he retorted, hand still hovering over his revolver.

Calm everybody down, Celeste thought. That’s what Hypatia would say. And also, don’t kill the customers, especially when they’re lining your coffers.

She lifted her hands. “All right, then, Mister. One more round. Give you a chance to win your money back, and then we’re even.”

Mustache grinned and let his hand drift back up toward his card. “Now, that’s more civilized.” He motioned for Zeke to send over a fresh drink. “And maybe we can get that sister of yours to come on out and show us her lungs.”

“I said don’t talk about my sister!”

He froze, staring, before he started screaming. Hollering like she’d stuck him in the heart instead of just the hand. He reared back, trying to get free, and his loose arm swept wide, sending drinks and chips flying.

The room dissolved into chaos. Someone was shouting murder, maybe one of Mustache’s companions, and then someone else was throwing a punch, and the blue-veiled woman’s hat tumbled off, revealing alligator scales and a forked tongue.

Celeste scooped the house winnings into a sack, dragged the dealing box in with them, and dropped low to the ground, just in time to miss a bullet flying past to lodge into the wall behind her. She glanced up and spied Hypatia grabbing the shooter by the neck, disarming him with a vicious chop, and dragging him bodily toward the front door. Celeste shifted directions, crawling out the other side. A crowd had gathered to watch the fight, some of the drunker patrons joining in. She kept her head low and worked her way through the rough-and-tumble, dodging the worst of it.

“Zeke!” she shouted over the din once she’d reached the bar. Zeke had a shotgun in hand and was busy guarding the spirits lining the back wall, making people think twice about taking advantage of the ruckus to try to steal what wasn’t theirs. “Have you seen Mariel?”

He grinned, eyes bright, his boyishly handsome face flushed. He was clearly enjoying himself. “Said she wasn’t feeling well,” he yelled back. “She’s lying down in the back for a while. Want me to rouse her?”

She looked across the room to where the back offices were. There were at least ten men between her and that door, all looking like they’d love to join in the row. “No. If she can sleep through this, then let her. I’ll have a smoke and wait it out.”

“Want me to send Hypatia out?”

She glanced over her shoulder. A few other punters had joined in the fight, and Hypatia was in the middle of it all, banging heads together, looking happy as a pig in shit.

Zeke grinned and sent her off with a salute.

Celeste slipped out into the back alley, avoiding the mess she’d made.