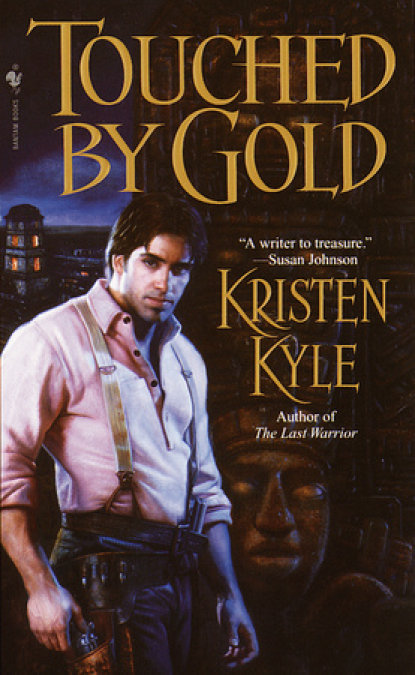 The Promise of Gold...

On the heels of her greatest discovery, archaeologist Elysia Carlisle faced her most shattering betrayal. Her fiance absconded with the artifacts she had carefully collected, leaving her stranded and penniless. Gone was the map to an even greater treasure, a find she'd hoped would bring her glory before the imminent end of her career.

Now Ellie was left with nothing but a mysterious stone talisman, her only clue to the treasure's location. But someone possessed the talisman's mate -- Matt Devereaux, a handsome and infuriating gambler who also sought the lost fortune.

The Perils of Passion...

Devereaux suggested they join forces, but Ellie feared trusting any man. Yet she needed his skills to pursue her quest on the rugged New Mexico frontier, where the wild animals weren't as dangerous as gold-crazed outlaws.

But even more treacherous to her was Devereaux himself. The reckless rogue aroused her long-denied desire, threatened her good sense, and was growing perilously close to unlocking the secrets of another closely guarded prize -- her heart.

THE SMELL of blood and dirt penetrated the dark shroud over his senses. Pain radiated from his left arm as he regained consciousness.

Matt Devereaux cracked one eye open and stared, uncomprehending, at a blurry brown mass. He lifted his head slightly bringing into focus the dry Ponderosa pine needles on which he lay. The sight brought back the memory of how he’d been left for buzzard bait.

He remembered the flash of gunfire, the agonizing burn of a bullet tearing across his upper arm, the fall from his horse. And he remembered the voices as he fell. He’d heard them last at a high stakes poker game in San Miguel, a game he’d won yesterday just before hitting the trail to Santa Fe.

The tumble down a steep slope had no doubt saved his life. If he’d fallen within easy reach, Clive and Sam Hayley and their gang would have finished him off. They probably assumed he was dead. His characteristic luck was holding … just barely.

Matt rolled onto his back. A low, rumbling growl drowned out his groan.

In an instant, Matt lost all interest in his pain. A warning chill swept through his body. He shifted his gaze to the rock outcropping six feet over his head.

A cougar sat on the ledge. The predator watched him with golden eyes, motionless except for the end of its long tail, which curled and twitched as if driven by a separate, restless life force.

One easy leap would bring the big cat down on top of him. Matt inched a hand to his right hip. Only the smooth leather edge of an empty holster met his fingertips. He swallowed another groan. His Colt revolver must have slipped free in the fall.

Dammit! He’d survived the nightmare of his youth, not to mention this ambush, only to potentially end up as dinner.

The cougar bared its white fangs, lips drawing back in a flow of muscles that rippled over its head and flattened its ears. It hissed, the sound like the release of steam from a locomotive.

The noise was enough to send any creature into a blind panic. Matt’s heart sank, but he’d glared defiantly at death too many times to let fear rule him now.

He sought the Bowie knife at his waist. Finding the carved bone hilt of the knife secure in its sheath offered little comfort, however. The cougar’s claws and teeth were equivalent to ten such knives, and the danger was compounded by a speed he couldn’t hope to match.

Matt eased up onto his elbows. Minimizing his movements to avoid antagonizing the cat, he looked around for his missing revolver. He spotted it several yards away, slightly downhill, half buried in pine needles.

Matt tensed. Instead of stretching out in a deadly leap, the cat began to pace along the ledge. Its thick coat was darker than most he’d seen in the southwest territories, golden brown rather than yellow. The black-tipped tail, a third of the cat’s length, swayed with each sleek, restless stride.

Matt inched toward the gun, crawling backward on his elbows, each careful movement a torment of apprehension. The wound in his arm started to bleed again. The scent of fresh blood permeated the air like an open invitation.

Without warning, the cat sprang.

Matt flung himself to the side. He rolled downhill, grabbing the revolver and coming to his feet in a half-crouch.

The cougar landed several feet from Matt’s last position, its shoulders absorbing the impact smoothly. Then it continued straight ahead in a relaxed, loping run. As it headed for the trees, Matt trailed its path with the gun, the barrel’s sight fixed on the cougar’s ribs.

Common sense demanded he pull the trigger. Yet he hesitated.

The cougar’s leap could easily have brought it down on top of him. Why had it landed so far off the mark? If nature’s perfect hunter had wanted Matt dead, he wouldn’t be alive now to wonder about it.

Teachings from Matt’s childhood visits with his Navajo grandmother came rushing back, whispering memories of mysticism and animal spirit guides. The appearance of a cougar signified that an attack from an unexpected source would be met successfully if one trusted in the great mystery and the circle of life.

Matt had been bushwhacked and left for dead in the wilderness, only to awaken and find a cougar watching him. Coincidence?

The cougar reappeared at the edge of the trees. Amber eyes shone like twin gold coins. The cat’s gaze locked with his. A shiver of awareness rushed down Matt’s spine.

He wondered if the loss of blood had gone to his head. No other man who’d survived range wars, Comancheros, and the harsh terrain of New Mexico would have hesitated to pull the trigger.

His grandmother’s people believed that cougars possessed mystical qualities, and that wisdom and good medicine came to spiritual seekers who approached with proper reverence. But that part of his life had ended abruptly at age eleven, when his French father and half-breed Indian mother died of typhoid, and Catholic priests took him away to be educated at a mission. The Navajo teachings seemed a distant echo, barely discernible across a span of twenty-two years and a life that could hardly be called spiritual. Yet he still respected the beliefs.

He rubbed his thumb uneasily over the hammer of the gun.

Making an abrupt decision, he uncocked the revolver, spun its barrel down, and slid it into the holster.

“Don’t give me a reason to regret this,” Matt muttered to the cat.

He must be crazy. Who was he to deserve a spirit guide? Such blessings were reserved for warriors and spiritual seekers, not hard-bitten cynics who’d experienced the worst side of life.

Oddly, Matt’s fear was gone. Nevertheless, the practical side of him intended to watch the animal’s every twitch … very carefully

Matt gazed up the steep slope coated with loose shale and matted pine needles. The climb back to the trail promised to be grueling.

A sudden wave of weariness swept over him. He’d lost a lot of blood as he lay unconscious. A sticky mat of red coated his left sleeve from shoulder to cuff.

Hooking two fingers into the bullet hole in the fabric, Matt ripped it larger. He inspected the damage to his upper arm. Although the Hayleys’ attempt to kill him had failed, the bullet had gouged a deep groove across the muscle.

He removed his tan neckcloth and knotted it around the wound, pulling it tight with his teeth. Retrieving his brown, broad-brimmed hat, he tugged it low on his brow. Then he started up the slope.

He kicked footholds with the toes of his brown knee-high boots. The knees of his tan wool trousers, where they tucked into the boot tops, scraped the loose soil. Progress was slow and painful. As he reached the top, the cougar bounded onto the trail several feet to his left with enviable ease.

The cougar turned to watch him. Matt studied the cat, noting its sleek form and the delicate lines of its head. It was small, not over a hundred pounds, he estimated. The cougar must be female.

Not surprisingly, an empty trail awaited him at the top of the slope. The Hayleys wouldn’t have ridden off and left his belongings behind. Hell, his saddle alone—hand tooled in St. Louis—was the envy of every man in the territory. His money, clothes, the bay stallion he’d raised from a colt, and the custom-engraved Winchester rifle— all were gone.

But most important, the Hayleys had taken his food and water.

Miles of mountainous terrain stretched between here and Santa Fe. On foot, the trip would take two days, even for a man not handicapped by loss of blood and lack of water. The nearest water was miles in either direction.

Matt started resolutely down the trail.

The cougar followed, as steadfast and elusive as a shadow.

After four hours of walking through the dry August heat, a gray mist began to crowd the edges of Matt’s vision. He swallowed repeatedly in a futile attempt to ease his thirst.

At regular intervals the cougar circled wide around him, then headed into patches of forest bordering the trail, only to come back again and repeat the pattern. It was almost as if she expected him to … Matt shook his head. The very thought was ridiculous. Follow her? Not likely. An innate sense of survival overrode his shaky notion of an animal spirit guide. Hell, what if he’d only been lucky thus far and she had been more curious than hungry?

Matt ignored her. He trudged on, despite a tendency to stumble with increasing frequency. A cougar attack wasn’t the only potential death stalking him in these mountains.

Then abruptly his mysterious companion disappeared.