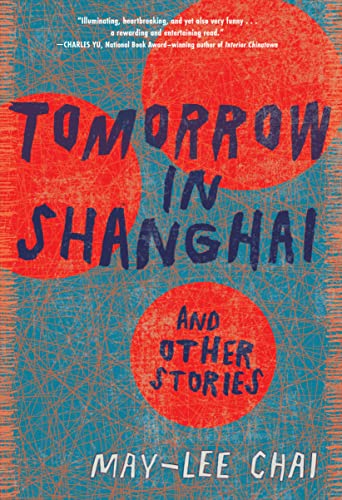 A short story collection exploring cultural complexities in China, the Chinese diaspora in America, and the world at large.

In a vibrant and illuminating follow-up to her award-winning story collection, Useful Phrases for Immigrants, May-lee Chai’s latest collection Tomorrow in Shanghai explores multicultural complexities through lenses of class, wealth, age, gender, and sexuality—always tracking the nuanced, knotty, and intricate exchanges of interpersonal and institutional power.

These stories transport the reader, variously: to rural China, where a city doctor harvests organs to fund a wedding and a future for his family; on a vacation to France, where a white mother and her biracial daughter cannot escape their fraught relationship; inside the unexpected romance of two Chinese-American women living abroad in China; and finally, to a future Chinese colony on Mars, where an aging working-class woman lands a job as a nanny. Chai's stories are essential reading for an increasingly globalized world.

Zhang Xiaobing would not have considered himself a bad person, should anyone have been given the opportunity to pose such a question to the prisoner. In fact, if asked by anyone other than the court-appointed defense attorney whose main function in the trial was to enter Zhang’s guilty plea, the prosecutor, and the panel of three judges who had found him guilty and sentenced him to death, very few people who knew Zhang would have said he was a bad person, wicked, evil, corrupt, a low-born thing, a turtle’s egg, a nonhuman devil whose crimes would merit the ultimate punishment.

Friends and acquaintances alike might merely have said, “Young Zhang, ah? He’s all right. He can get things done.” Or, “If you need some business finished, Young Zhang can help you.” Or even, “Heavens! That Zhang Xiaobing, he saved my son’s life. Brought a doctor from the county seat all the way in that truck of his. He’s really something. A real Han. Such a kind man.”

But, of course, of the 274 villagers he’d helped in the nearly two decades that he’d served as a cadre in his hometown, slowly moving up the ranks since his days as a man in his early thirties just returned from a stint as a soldier in the People’s Liberation Army after a career-ending leg injury, not one of his neighbors was asked what they personally thought of Assistant Village Head Zhang. And if or when any of them had offered their unprompted personal opinion of the man who was uncle, great-uncle, nephew, cousin, second cousin, third cousin once removed to almost every male surnamed Zhang in the village, the official police report did not record them. Instead, the report contained the diverse and often contradictory accounts from other villages of the crimes that had led to his arrest, detention, and sentencing.

Officially, he was a snake, a xue tou, a “blood head” who had illegally collected and sold the blood bought from the poor, illiterate peasants throughout the province, thus causing the deaths of more than thirty-seven persons (thus far) and the infection of more than a thousand (and counting) others in the myriad remote villages nestled in the mountains and plains just south of the Yellow River in the province that was once the cradle of Chinese civilization, where giant Buddhas carved into mountainsides gazed serenely heavenward, as though such crimes could not possibly occur here.

Certainly, no one asked Zhang’s wife, Tang Tianyi, what she felt of the matter. She had died of a protracted and expensive illness, leaving nothing but debts behind. As for his young son, the boy had simply disappeared along with Zhang’s parents, just before Zhang had been arrested some three months earlier.

The authorities suspected that the brazen criminal Zhang Xiaobing had sent them to a city on the coast, just three more people with thick provincial accents to hide amid the floating population of China’s megacities. Impossible to track down, although the provincial authorities had used whatever connections they could muster— uncles or brothers in the military, other police chiefs, people who owed them favors—to keep their eyes peeled. (Naturally, their connections merely rolled their eyes at the naivete of their country cousins, all the while promising, “Sure, sure, I’ll ask around. Terrible, it’s terrible what this man Zhang has done.” Then they promptly forgot about the three missing peasants. They had business to conduct. Life in the city. Aiya! You had to stay on your toes. No time for village nonsense.)

Still, having done their best, the police and county officials remained concerned about Zhang’s parents and the missing son. Leaving relatives alive and guiltless could cause trouble in the future. But as stated earlier, the wizened old man with the high cheekbones, his round doughy-faced wife, and the slightly myopic but otherwise quite able twelve-year-old son of Zhang went missing and were now gone, hidden, needles in the giant haystack of urban China’s migrant worker population. Like all peasants, not quite blending in and yet completely invisible to urban eyes.

“They’re as good as dead! They won’t dare to show up around here again.”

“They’ll never make it by themselves! They’ll starve to death on their own!”

“Zhang’s son will wash windows on Shenzhen’s skyscrapers. He’ll grow up pouring concrete and climbing bamboo scaffolding in Beijing, and who will remember he was ever alive?”

“And those two old heads.” The county police chief used the derogatory term for the elderly, even though his own parents were as old as Zhang’s. “If they don’t starve selling tea eggs on the side of the road, they’ll catch a cold and die in a hospital, leaving debts and nothing more for that boy.” The man spat tea leaves on the carpet of the conference room of the county Public Security Bureau. He’d forgotten he wasn’t at home where the floor was concrete and where he spat his tea leaves as he pleased.

Thus, Zhang Xiaobing was shot in the back of the head at 11:07 a.m. on the twenty-seventh of April, and within sixty seconds—for the timing was of the utmost importance—his still-warm corpse was dragged into the ambulance waiting at the side of the execution grounds, and a trained doctor began to extract his organs.

The local police looked at the young doctor with a mixture of suspicion and awe. He was obviously well educated and smart. They watched how he washed his hands, tied on his face mask, put on the latex gloves; he was a city boy all right. Probably born in a city, they agreed. His skin was pale, and he had those soft hands. Plus, he was wearing glasses with fashionable frames like nothing they’d seen in the county seat before. Like something on satellite TV. Like a Korean soap opera star. Yes, that’s exactly what he looked like. The provincial authorities had come through in the end and pressed for a real expert to help bring this “situation” to an end.

The young doctor had taken Zhang’s blood forty-eight hours before the execution to test for HIV; hepatitis A, B, and C; TB; and a host of parasites and sexually transmitted diseases. The young doctor had no illusions about what went on in the countryside these days. You could never be too sure. He’d taken on the work because his parents already owed enough money after paying for his education, and he couldn’t borrow any more from them in good conscience, and he was saving up for his imminent marriage and the apartment that his fiancée—also a doctor—wanted to buy, as well as the furniture they would need. He had not wanted to borrow from his future in-laws or his friends. He’d never recover face. His youth was behind him; he understood that perfectly as he stood in the chilly wind injecting the criminal with heparin to slow the coagulation of the blood and a mild sedative—in case the man were inclined to try something crazy, leap away, fight, something that might necessitate a second bullet, which could cause more damage to the organs than merely killing the man with one shot. Such drugs made the harvest easier.

No, he was no longer truly a young man, the doctor thought with a sigh. It was time for him to take care of his parents. His mother’s health was no longer good, and if she fell ill again, he would want her to have the best healthcare China could provide, which would mean more money and favors. And so, he’d taken on this extra side job that he’d heard about through the friend of a classmate from medical school. It was not an ideal job, but this was not an ideal world, and the young doctor’s obligations were heavy indeed.

He had walked to the ambulance and turned his back to the prisoner so that he would not have to watch the man die. Despite himself, he had jumped when he heard the gun fire.

When the unwashed local police officers dragged the body of the criminal to the back of the ambulance, the young doctor felt momentary disgust at their crude manners, their thick uncultured accents, the black soil beneath their nails. He washed his own hands one more time in the bucket of water they brought to him before he put on the latex gloves, which he’d had to bring himself.

Thank goodness the old doctor had warned him about the conditions in these rural parts. They’d met at the provincial hospital while he waited for the county officials’ car to come and pick him up. They hadn’t engaged in small talk, the young doctor and the older doctor, a veteran of many of these side jobs. There were no words about the weather, the cool morning, the cerulean of the sky here far from the coastal cities, the distant clouds on the horizon and the persistent wind, which threatened to bring rain perhaps, which would slow the commute back home—and out of this forlorn provincial backwater. The younger doctor had thought this last bit to himself but did not say it aloud, although it was highly likely the older doctor might have been thinking exactly this same thing. Sometimes there was no need to state the obvious.

The older doctor spoke to him only when the county officials arrived in their new black Buick, a driver sporting white gloves in the front seat, all three of the officials riding in the back seat. Typical bumpkins, the young doctor thought. That’s when the older doctor had said, “Better bring your own gloves. And ask for a scalpel from the hospital here, too. Plus dry ice. They won’t be prepared at their end. I’d bet money on it.” The young doctor had thanked his colleague, for that’s how he thought of the man now, and had done as the older man advised.