THE NUMBER ONE SUNDAY TIMES BESTSELLER

'After the painfully affecting [A Little Life] To Paradise gives us three stories far apart in space and time but each unique in their power to summon the joy and complexity of love, the pain of loss. I’m not sure I’ve ever missed the world of a book as much as I miss To Paradise now I’ve left it . . . It’s rare that you get the opportunity to review a masterpiece, but To Paradise, definitively, is one.' – Observer

'Awe-inspiring . . . The characters are so well drawn and the plot so well paced, I couldn’t put it down.' – Daily Telegraph

From Hanya Yanagihara, author of the modern classic A Little Life, To Paradise is a bold, brilliant novel spanning three centuries and three different versions of the American experiment, about lovers, family, loss and the elusive promise of utopia.

In an alternate version of 1893 America, New York is part of the Free States, where people may live and love whomever they please (or so it seems). The fragile young scion of a distinguished family resists betrothal to a worthy suitor, drawn to a charming music teacher of no means. In a 1993 Manhattan besieged by the AIDS epidemic, a young Hawaiian man lives with his much older, wealthier partner, hiding his troubled childhood and the fate of his father. And in 2093, in a world riven by plagues and governed by totalitarian rule, a powerful scientist’s damaged granddaughter tries to navigate life without him – and solve the mystery of her husband’s disappearances.

These three sections are joined in an enthralling and ingenious symphony, as recurring notes and themes deepen and enrich one another: A townhouse in Washington Square Park in Greenwich Village; illness, and treatments that come at a terrible cost; wealth and squalor; the weak and the strong; race; the definition of family, and of nationhood; the dangerous righteousness of the powerful, and of revolutionaries; the longing to find a place in an earthly paradise, and the gradual realization that it can’t exist. What unites not just the characters, but these Americas, are their reckonings with the qualities that make us human: Fear. Love. Shame. Need. Loneliness.

To Paradise is a fin-de-siecle novel of marvellous literary effect, but above all it is a work of emotional genius. The great power of this remarkable novel is driven by Yanagihara’s understanding of the aching desire to protect those we love – partners, lovers, children, friends, family and even our fellow citizens – and the pain that ensues when we cannot. 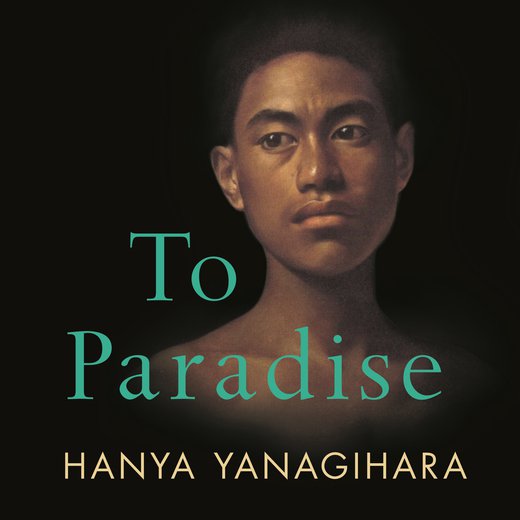 He had come into the habit, before dinner, of taking a walk around the park: ten laps, as slow as he pleased on some evenings, briskly on others, and then back up the stairs of the house and to his room to wash his hands and straighten his tie before descending again to the table. Today, though, as he was leaving, the little maid handing him his gloves said, “Mister Bingham says to remind you that your brother and sister are coming tonight for supper,” and he said, “Yes, thank you, Jane, for reminding me,” as if he’d in fact forgotten, and she made a little curtsy and closed the door behind him.

He would have to go more quickly than he would were his time his own, but he found himself being deliberately contrary, walking instead at his slower pace, listening to the clicks of his boot heels on the pavestones ringing purposefully in the cold air. The day was over, almost, and the sky was the particular rich ink-purple that he couldn’t see without remembering, achily, being away at school and watching everything shade itself black and the outline of the trees dissolve in front of him.

Winter would be upon them soon, and he had worn only his light coat, but nevertheless, he kept going, crossing his arms snug against his chest and turning up his lapels. Even after the bells rang five, he put his head down and continued moving forward, and it wasn’t until he had finished his fifth circumnavigation that he turned, sighing, to walk north on one of the paths to the house, and up its neat stone steps, with the door opening for him before he reached the top, the butler reaching already for his hat.

“In the parlor, Mister David.”

Outside the parlor doors he stood, passing his hands repeatedly over his hair—a nervous habit of his, much as the repeated smoothing of his forelock as he read or drew, or the light drawing of his forefinger beneath his nose as he thought or waited for his turn at the chessboard, or any number of other displays to which he was given—before sighing again and opening both doors at once in a gesture of confidence and conviction that he of course did not possess. They looked over at him as a group, but passively, neither pleased nor dismayed to see him. He was a chair, a clock, a scarf draped over the back of the settee, something the eye had registered so many times that it now glided over it, its presence so familiar that it had already been drawn and pasted into the scene before the curtain rose.

“Late again,” said John, before he’d had a chance to say anything, but his voice was mild and he seemed not to be in a scolding mood, though one never quite knew with John.

“John,” he said, ignoring his brother’s comment but shaking his hand and the hand of his husband, Peter; “Eden”—kissing first his sister and then her wife, Eliza, on their right cheeks—“where’s Grandfather?”

They all stood there for a moment in silence, and for a second David felt the old embarrassment he often sensed for the three of them, the Bingham siblings, that they should have nothing to say to one another—or, rather, that they should not know how to say anything—were it not for the presence of their grandfather, as if the only thing that made them real to one another were not the fact of their blood or history, but him.

“Busy day?” asked John, and he looked over at him, quickly, but John’s head was bent over his pipe, and David couldn’t tell how he had intended the question. When he was in doubt, he could usually interpret John’s true meaning by looking at Peter’s face—Peter spoke less but was more expressive, and David often thought that the two of them operated as a single communicative unit, Peter illuminating with his eyes and jaw what John said, or John articulating those frowns and grimaces and brief smiles that winked across Peter’s face, but this time Peter was blank, as blank as John’s voice, and therefore of no help, and so he was forced to answer as if the question had been meant plainly, which it perhaps had.

“Not so much,” he said, and the truth of that answer—its obviousness, its undeniability—was so inarguable and stark that it again felt as if the room had gone still, and that even John was ashamed to have asked such a question. And then David began to try to do what he sometimes did, which was worse, which was to explain himself, to try to give word and form to what his days were. “I was reading—” But, oh, he was spared from further humiliation, because here was their grandfather entering the room, a dark bottle of wine furred in a mouse-gray felt of dust held aloft, exclaiming his triumph—he had found it!—even before he was fully among them, telling Adams they’d be spontaneous, to decant it now and they’d have it with dinner. “And, ah, look, in the time it took me to locate that blasted bottle, another lovely appearance,” he said, and smiled at David, before turning toward the group so that his smile included them all, an invitation for them to follow him to the dining table, which they did, and where they were to have one of their usual monthly Sunday meals, the six of them in their usual positions around the gleaming oak table—Grandfather at the head, David to his right and Eliza to his, John to Grandfather’s left and Peter to his, Eden at the foot—and their usual murmured, inconsequential conversation: news of the bank, news of Eden’s studies, news of the children, news of Peter’s and Eliza’s families. Outside, the world stormed and burned—the Germans moving ever-deeper into Africa, the French still hacking their way through Indochina, and closer, the latest frights in the Colonies: shootings and hangings and beatings, immolations, events too terrible to contemplate and yet so near as well—but none of these things, especially the ones closest to them, were allowed to pierce the cloud of Grandfather’s dinners, where everything was soft and the hard was made pliable; even the sole had been steamed so expertly that you needed only to scoop it with the spoon held out for you, the bones yielding to the silver’s gentlest nudge. But still, it was difficult, ever more so, not to allow the outside to intrude, and over dessert, a ginger-wine syllabub whipped as light as milk froth, David wondered whether the others were thinking, as he was, of that precious gingerroot that had been found and dug in the Colonies and brought to them here in the Free States and bought by Cook at great expense: Who had been forced to dig and harvest the roots? From whose hands had it been taken?

After dinner, they reconvened in the parlor and Matthew poured the coffee and tea and Grandfather had shifted in his seat, just a bit, when Eliza suddenly sprung to her feet and said, “Peter, I keep meaning to show you the picture in that book of that extraordinary seabird I mentioned to you last week and promised I wouldn’t let myself forget again tonight; Grandfather Bingham, might I?” and Grandfather nodded and said, “Of course, child,” and Peter stood then, too, and they left the room, arm in arm, Eden looking proud to have a wife who was so well attuned to everything around her, who could anticipate when the Binghams would want to be alone and would know how to gracefully remove herself from their presence. Eliza was red-haired and thick-limbed, and when she moved through the parlor, the little glass ornaments trimming the table lamps shivered and jingled, but in this respect she was light and swift, and they had all had occasion to be grateful to her for this knowingness she possessed.

So they were to have the conversation Grandfather had told him they would back in January, when the year was new. And yet each month they had waited, and each month, after each family dinner—and after first Independence Day, and then Easter, and then May Day, and then Grandfather’s birthday, and all the other special occasions for which the group of them gathered—they had not, and had not, and had not, and now here it was, the second Sunday in October, and they were to discuss it after all. The others, too, instantly understood the topic, and there was a general coming-to, a returning to plates and saucers of bitten-into biscuits and half-full teacups, and an uncrossing of legs and straightening of spines, except for Grandfather, who instead leaned deeper into his chair, its seat creaking beneath him.