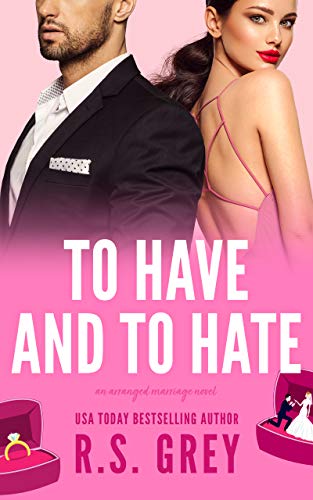 Marry a man I barely know to save my family from ruin.
It might've been simple, if my betrothed were anybody else.

On our wedding day, my husband-to-be arrived at the courthouse like a black cloud rolling over Manhattan. Walt didn't crack smiles or pepper in pleasantries as we exchanged hollow vows in front of the judge.

His disdain for me was so palpable I assumed we'd walk out of that ceremony and resume our regularly scheduled programming. But then fate was like, Hold my beer. I got this.

In desperate need of help and with nowhere else to turn, I had no choice but to ignore a crucial rule in our contract: I shall only contact Mr. Jennings II in case of emergency. But hey, what's a little fine print between husband and wife?

Turns out, Walt's a stickler for legalese—I think it might be his love language. Oh, and his attitude at the courthouse wasn't a put-on. My so-called husband is a jerk. He takes what he wants without giving any consideration to other people—specifically ME, his blushing, contractually-obligated bride!

I knew life with Walt would be no honeymoon, but a marriage of any sort should still come with a few standard guarantees:

To have and to hold.
For richer or poorer.
In sickness and in health.

But after experiencing Walt's version of wedded bliss, I say let's forget about all that lovey-dovey crap and just take me straight to death do us part.

I stand out like a sore thumb. Even in New York City, people tend to opt for cream or white when it comes to bridal attire. I’m in neither. Even worse, my dress is shorter than I remember it being when I left my hotel room. The hem has lost inches on my walk to the courthouse. I like to think the cheetah print is subtle, but my black Doc Martens are not. I’ve had them for years. They’re my version of Dorothy’s slippers.

Another gust of wind blows up my dress and I shiver in my boots, looking up and down the street, waiting for him to show. I’m surprised by the number of blushing couples that rush past me, eager to get out of the cold and begin their wedded bliss with a ceremony inside the courthouse.

I’ll be one of them soon, I suppose. I look down at my naked ring finger and imagine how it will look with a fat diamond weighing it down, then I think back to the phone call I received last night.

My mom rarely calls me. In fact, I did a double take when I saw her name appear on the screen.

“Mom?” I asked after I answered, still wary of the odd turn of events. Part of me assumed the call was a mistake—a run-of-the-mill butt-dial—until she spoke. Her sharp tone sent a shiver down my spine.

“Elizabeth Brighton, where are you? All that background noise is dreadful.”

The music grew louder as the artists continued their performance in the center of the museum’s foyer.

She tsked as if she didn’t like the answer, and before she even had to ask, I walked away from the thick crowd of onlookers who’d gathered until I found a quiet corner.

“Can you hear me better now?” I asked, testing the waters.

“Yes. Thank goodness. Now, before I begin, you should know I don’t relish making this phone call.”

I puffed out a laugh, slightly taken aback by her candor.

“Don’t take that tone with me.”

I ticked my jaw, willing myself to bite my tongue and rein in my sarcasm, not wanting to make the situation any worse for myself. My mom and I have a strained relationship to say the least. If she had it her way, I’d fall in line with the rest of my siblings, move home to Connecticut, and follow right in her footsteps.

I assumed that was what the call would be about, actually. I thought it would follow the pattern of all the others: “Do you have to be so difficult? Do you truly think you can pay your bills with your doodles?” always leads into “Your father and I do not support this and we will not continue to fund this bohemian lifestyle you’re so hell-bent on achieving” which eventually dissolves into a teary “Elizabeth, I don’t understand how you could do this to us.”

When I was growing up, my mom loved my interest in art, but only because she assumed it would eventually dead-end into a career accepted by her and her high-society friends. It’s one thing to cultivate a gentle pursuit in art advising or collection management. It’s another to be an artist, down in the trenches with the masses.

I girded my loins for the same conversation we’d had a million times before, but then my mother sighed, deep and heavy. A long pause followed, and my heart sank in my chest. Something was off.

“Mom?” I asked hesitantly. “Is everything okay?”

“No,” she replied with a clipped tone. “As a matter of fact, it’s not. Your sister has run away with her driver.”

Now, I’m not proud of the fact that I laughed in this moment. It was just so unexpected! My sister has always perfectly fit the mold of my mom’s dreams for her. Popular in school—check. Classically beautiful—check. Just smart enough to get into an Ivy League but not so smart that she could be labeled as a stuffy intellectual—check. I’ve never seen her without a full face of makeup. I’ve never seen her not decked out in designer clothes. She was probably on track to marry some blue-blood prince, and now this. THIS. Running away with her driver?! It’s too good.

At least it felt that way until my mom started to cry over the phone.

My laughter dried up on the spot once I realized her overwhelmingly dramatic sobs weren’t going to stop anytime soon.

“Mom? Oh god. I’m sorry, okay? It’s going to be fine. So what if Charlotte ran away with her driver? At least she’s happy!”

I fought the urge to roll my eyes, knowing instinctively why my mom was having such a hard time with this. “Who cares what your friends think?”

“My friends?!” Her shrill tone caught my full attention. “I don’t care about my friends! You don’t understand, Elizabeth. Your sister was betrothed to someone else.”

My memory of the phone call is broken off by a loud honk as two cars nearly collide on the street in front of the courthouse. Windows are rolled down. Curse words are slung from one driver to the other. “Well screw you, pal!” is the parting shot before they disappear and my attention is drawn to the group of pedestrians crossing the street in my direction. In the back of the pack, with his hands tucked into his wool trench coat pockets and his attention on the horizon, is a man I recognize but don’t know. He’s a near stranger, and he’s about to be my husband.

Butterflies stir in my stomach as excitement blends into dread. I can’t believe I’ve agreed to do this—to take my sister’s spot—and in fact, I’m still not so sure it’s a wise decision, but now that he’s here in front of me, flesh and blood, tall and handsome, I feel like I can’t back out of the arrangement.

He looks up from the sidewalk and spots me. I freeze as he moves closer, assessing me without giving any hint as to what he really thinks. His dark eyes slide down my dress, linger on my boots for a moment too long, and then finally drag back up to my face as he comes to a stop in front of me.

I swallow and wait for him to smile and introduce himself. In fact, my mouth is already starting to tip up, preparing to reciprocate.

Instead, he simply asks, “Are you sure you want to do this?”

Bleak words for a bleak affair.

“Having second thoughts?” I ask, squaring my shoulders and jutting out my chin, trying to exude false confidence.

He sees right through it, narrowing his eyes so his black lashes cluster together, further defining his shrewd gaze.

I don’t move an inch, not so much as a hair on my body swaying under his intense scrutiny. It feels like he stares at me so long I should have vines growing up my legs, anchoring me to my spot, before he gestures for me to take the lead into the courthouse. I hesitate at first, realizing instinctively I don’t feel comfortable turning my back on him.

Who is this man?

I mean, I know who he is on the surface.

Almost a century ago, our grandfathers worked together to invent the battery-powered pacemaker, thus founding Diomedica. Today, the company has grown to be the largest medical device company in the world, specializing in the design and distribution of cranial and spine robotics, surgical tools, and insulin pumps. Diomedica employs over a hundred thousand people across the globe. It’s also the main reason I’m here today, willing to go through with this hasty marriage.

I’ve been around Walt a few times in my life at dinners and holiday parties, though it’s been almost a decade since I last saw him. He’s ten years my senior, which means even back then, I don’t think we had much to say to each other outside of obligatory greetings. Beyond thinking he was pretty hot for someone way older, he wasn’t on my radar, and I definitely wasn’t on his. I try to imagine what I would have looked like the last time we were together. There’s no doubt I was rail thin and lanky, probably trying and failing to fill out my dress. In all likelihood, I was off reading somewhere on my own, trying to disappear into a corner. I always brought a book with me to those parties my parents dragged me to.

I wonder what he would have been up to back then. Working the room? Flirting with women? My sister included?

We reach the door of the courthouse, and he reaches out to open it for me and usher me inside. I catch a hint of cologne as I brush past him, slightly embarrassed to think of what I must smell like in comparison. I didn’t bring much of a wardrobe with me to the city. This is my fanciest dress, and I was wearing it last night, which meant there was no time to get it dry-cleaned before this morning.