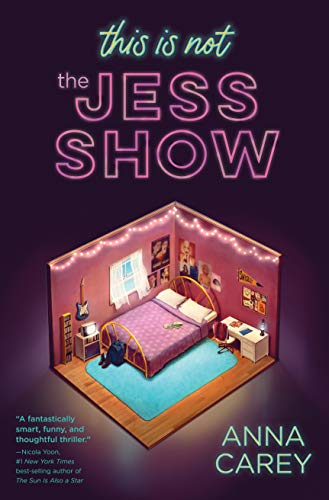 “At once thought-provoking and hilarious, This Is Not the Jess Show is a timely, incisive book so masterfully-plotted you won't want to put it down.”—Tahereh Mafi, New York Times best-selling author of the Shatter Me series and A Very Large Expanse of Sea

“A fantastically smart, funny, and thoughtful thriller about how our devices manipulate and exploit our closest relationships.”—Nicola Yoon, #1 New York Times bestselling author of Everything, Everything and The Sun Is Also a Star

The year is 1998: Titanic just won 6 Oscars, boy bands are dominating MTV's airwaves, and like any other teenager Jess Flynn is just trying to survive high school. Between a crush on her childhood best friend, overprotective parents, and her sister's worsening health, the only constant is her hometown of Swickley, which feels smaller by the day. Jess is resigned to her small-town life, until the day she discovers a mysterious device with an apple logo, causing her to question everything and everyone she's ever known. As more cracks appear in Jess's world, she faces a choice: can she live the rest of her life knowing it's a lie or should she risk everything for the truth?

A fast-paced, mind-bending YA thriller packed with ‘90s pop culture references and perfect for fans of Black Mirror, This Is Not the Jess Show will keep readers guessing until the very end.