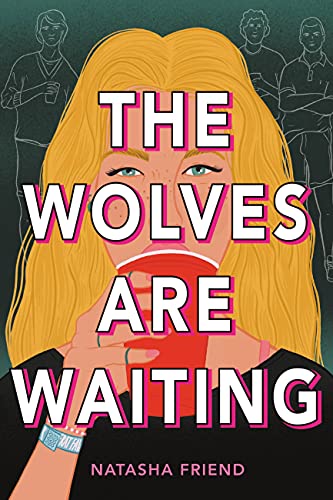 From award-winning author Natasha Friend comes a compelling investigation of sexual harassment and the toxic and complicit structures of a small college town.

Before the night of the Frat Fair, 15-year-old Nora Melchionda's life could have been a Gen-Z John Hughes movie. She had a kind-of boyfriend, a spot on the field hockey team, good grades, and a circle of close friends. Of course there were bumps in the road: she and her lifelong BFF Cam were growing apart and her mother was trying to clone her into wearing sensible khakis instead of showy short skirts. But none of that mattered, because Nora always had her dad, Rhett Melchionda, on her side. Rhett was not only Nora’s hero, but as the Athletic Director of Faber College, he was idolized by everyone she knew.

Now, Nora would give anything to go back to that life. The life before whatever happened on the golf course.

She doesn’t want to talk about it—not that she could, because she doesn’t remember anything—and insists that whatever happened was nothing. Cam, though, tries to convince Nora to look for evidence and report the incident to the police. And then there’s Adam Xu, who found Nora on the golf course and saw her at her most vulnerable. She ignores it all, hoping it will all go away. But when your silence might hurt other people, hiding is no longer an option.

The Wolves Are Waiting begins in the aftermath of an attempted assault, but reaches farther than a story about one single night or one single incident. What Nora and her friends will uncover is a story that spans generations. But it doesn’t have to anymore.

SHE WAS LYING ON THE GROUND, SPREAD-EAGLE, breathing in the scent of earth. There was a horrible taste in her mouth, like metal and olives. She turned her head to the side, gagging. Just thinking about olives made her want to hurl.

Who was talking? She tried to look, but light stabbed her eyeballs. She tried to swallow. Her tongue felt thick and furry. Weird. Could a tongue grow fur overnight? She needed water.

Let me get you a drink.

Not a drink drink. A pop… Sprite? Coke?

A pop? Who said pop instead of soda? And what was this fragment of conversation?

She tried again. More daggers of light. Better to stay here, in the dark.

“Nora.” A hand on her shoulder, squeezing. “Wake up. You’re scaring me.”

That’s when she recognized the voice. It was her best friend, Cam.

Her thoughts began to crystallize. What was Cam doing here? They were mad at each other. They’d had a fight last night… about… something. There was a boy… in a red shirt. Or had Cam been wearing the red shirt? Now her brain was as furry as her tongue. A furry tongue, for eff’s sake. How was that possible? She really needed something to drink.

Ice or no ice?

Why was root beer called beer anyway? It didn’t have alcohol. And was it actually made from roots?

“Nora.” A poke now. An actual poke in the ribs. And another.

She opened her eyes. “Stop that!”

Everything was so bright. Painfully bright. She had to squint to see Cam’s face looming over her. Cam’s hair was every which way. Her mascara was smudged.

“Shut up,” Cam said. “It’s your fault. I’ve been sitting here all night making sure you weren’t dead.”

“Huh,” Nora said, lifting her chin. There was a dull ache at the base of her skull. “Where am I?”

The Faber University golf course? Nora didn’t golf. And what was this pain? Had someone clubbed her on the head?

“I got a text,” Cam said, “from your phone. Saying you needed help. There were these guys—”

“Guys?” Nora sat up. The green grass swam in front of her eyes. “What guys?”

“He’s the one who texted me. To say you were in trouble. He said there were these guys—”

“Yeah. From your phone. He didn’t have my number.”

Nora felt her head bob. The motion made her dizzy.

“You need to thank him,” Cam said. “He chased the guys away with a baseball bat.”

Baseball bat. Adam Xu. Golf course. It was all so confusing.

“Also… I found your underwear hanging from the flagstick.”

“The flagstick.” Cam pointed. “That yellow thingy poking out of the hole. Your underwear was hanging off it.”

“My underwear.” Nora felt a little sick. She looked down at herself. Black scoop neck. Jean miniskirt.

“Oh.” Nora nodded. Cam had put her underwear back on, like she was a baby or a grandma in a nursing home. She should be embarrassed. She was embarrassed.

“Do you remember anything about last night?”

“The frat fair,” Nora said without hesitation. She was still wearing her blue wristband, the one that allowed unlimited rides.

“What did you do at the frat fair?”

“Rode the Yo-Yo.” That was an easy one, too. She remembered soaring over everyone’s heads, the wind in her hair. She remembered squeezing her knees together so no one could see up her skirt.

“I ate funnel cake,” Nora said. She could picture it: the greasy disk of dough as big as her head, heaped with powdered sugar. “It made me really thirsty. I had to wait in line all over again to get a drink.”

Cam put a hand on Nora’s arm. Her raccoon eyes were comically wide. “What did you drink? Rum? Vodka?… Tequila?”

“No, Camille.” Nora was annoyed. Cam knew she didn’t

drink alcohol. Ever since that sleepover at Becca Bomberg’s house the last day of ninth grade, when the three of them drank an entire bottle of Manischewitz and Nora projectile-vomited into a potted plant on Becca’s porch. “I had a root beer.”

“Yes.” Nora raised her chin triumphantly. “In a red cup. With ice.” She remembered this clearly now, holding the drink in her hand, lifting it to her lips. The bubbles had tickled her nose.

Cam was looking at her funny.

“When I got here… you were passed out.”

“Ah,” Nora said. As though this explained everything, when, really, it explained nothing. Ah.

She turned her head and barfed onto the beautifully manicured grass.