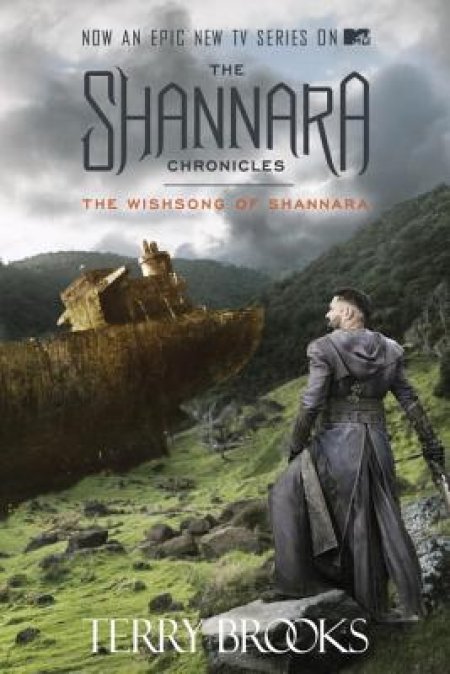 ONE OF THE MOST POPULAR FANTASY TALES OF ALL TIME. NOW AN EPIC TV SERIES.

An ancient evil is stirring, intent on the complete destruction of all life. The Druid Allanon sets out on a dangerous journey to save the world, reluctantly aided by Brin Ohmsford, daughter of Wil Ohmsford—for she alone holds the magic power of the wishsong. But a prophecy foretells doom, as evil nurses its plan to trap the unsuspecting Brin into a fate far more horrible than death.

“Shannara was one of my favorite fictional worlds growing up, and I look forward to many return trips.”—Karen Russell, author of Swamplandia!

“If Tolkien is the grandfather of modern fantasy, Terry Brooks is its favorite uncle.”—Peter V. Brett, author of The Skull Throne

A change of seasons was upon the Four Lands as late summer faded slowly into autumn. Gone were the long, still days of midyear where sweltering heat slowed the pace of life and there was a sense of having time enough for anything. Though summer’s warmth lingered, the days had begun to shorten, the humid air to dry, and the memory of life’s immediacy to reawaken. The signs of transition were all about. In the forests of Shady Vale, the leaves had already begun to turn.

Brin Ohms­ford paused by the flowerbeds that bordered the front walkway of her home, losing herself momentarily in the crimson foliage of the old maple that shaded the yard beyond. It was a massive thing, its trunk broad and gnarled. Brin smiled. That old tree was the source of many childhood memories for her. Impulsively, she stepped off the walkway and moved over to the aged tree.

She was a tall girl—­taller than her parents or her brother Jair, nearly as tall as Rone Leah—­and although there was a delicate look to her slim body, she was as fit as any of them. Jair would argue the point of course, but that was only because Jair found it hard enough as it was to accept his role as the youngest. A girl, after all, was just a girl.

Her fingers touched the roughened trunk of the maple softly, caressing, and she stared upward into the tangle of limbs overhead. Long, black hair fell away from her face and there was no mistaking whose child she was. Twenty years ago, Eretria had looked exactly as her daughter looked now, from dusky skin and black eyes to soft, delicate features. All that Brin lacked was her mother’s fire. Jair had gotten that. Brin had her father’s temperament, cool, self-­assured, and disciplined. In comparing his children one time—­a time occasioned by one of Jair’s more reprehensible misadventures—­Wil Ohms­ford had remarked rather ruefully that the difference between the two was that Jair was apt to do anything, while Brin was also apt to do it, but only after thinking it through first. Brin still wasn’t sure who had come out on the short end of that reprimand.

Her hands slipped back to her sides. She remembered the time she had used the wishsong on the old tree. She had still been a child, experimenting with the Elven magic. It had been midsummer and she had used the wishsong to turn the tree’s summer green to autumn crimson; in her child’s mind, it seemed perfectly all right to do so, since red was a far prettier color than green. Her father had been furious; it had taken almost three years for the tree to come back again after the shock to its system. That had been the last time either she or Jair had used the magic when their parents were about.

“Brin, come help me with the rest of the packing, please.”

It was her mother calling. She gave the old maple a final pat and turned ­toward the house.

Her father had never fully trusted the Elven magic. A little more than twenty years earlier he had used the Elf­stones given him by the Druid Allanon in his efforts to protect the Elven Chosen Amberle Elessedil in her quest for the Bloodfire. Use of the Elven magic had changed him; he had known it even then, though not known how. It was only after Brin was born, and later Jair, that it became apparent what had been done. It was not Wil Ohms­ford who would manifest the change the magic had wrought; it was his children. They were the ones who would carry within them the visible effects of the magic—­they, and perhaps generations of Ohms­fords to come, although there was no way of ascertaining yet that they would carry within them the magic of the wishsong.

Brin had named it the wishsong. Wish for it, sing for it, and it was yours. That was how it had seemed to her when she had first discovered that she possessed the power. She learned early that she could affect the behavior of living things with her song. She could change that old maple’s leaves. She could soothe an angry dog. She could bring a wild bird to light on her wrist. She could make herself a part of any living thing—­or make it a part of her. She wasn’t sure how she did it; it simply happened. She would sing, the music and the words coming as they always did, unplanned, unrehearsed—­as if it were the most natural thing in the world. She was always aware of what she was singing, yet at the same time heedless, her mind caught up in feelings of indescribable sensation. They would sweep through her, drawing her in, making her somehow new again, and the wish would come to pass.

It was the gift of the Elven magic—­or its curse. The latter was how her father had viewed it when he had discovered she possessed it. Brin knew that, deep inside, he was frightened of what the Elf­stones could do and what he had felt them do to him. After Brin had caused the family dog to chase its tail until it nearly dropped and had wilted an entire garden of vegetables, her father had been quick to reassert his decision that the Elf­stones would never be used again by anyone. He had hidden them, telling no one where they could be found, and hidden they had remained ever since. At least, that was what her father thought. She was not altogether certain. One time, not too many months earlier, when there was mention of the hidden Elf­stones, Brin had caught Jair smiling rather smugly. He would not admit to anything, of course, but she knew how difficult it was to keep anything hidden from her brother, and she suspected he had found the hiding place.

Rone Leah met her at the front door, tall and rangy, rust brown hair loose about his shoulders and tied back with a broad headband. Mischievous gray eyes narrowed appraisingly. “How about lending a hand, huh? I’m doing all the work and I’m not even a member of the family, for cat’s sake!”

“As much time as you spend here, you ought to be,” she chided. “What’s left to be done?”

“Just these cases to be carried out—­that should finish it.” A gathering of leather trunks and smaller bags stood stacked in the entry. Rone picked up the largest. “I think your mother wants you in the bedroom.”

He disappeared down the walkway and Brin moved through her home ­toward the back bedrooms. Her parents were getting ready to depart on their annual fall pilgrimage to the outlying communities south of Shady Vale, a journey that would keep them gone from their home for better than two weeks. Few Healers possessed the skills of Wil Ohms­ford, and not one could be found within five hundred miles of the Vale. So twice a year, in the spring and fall, her father traveled down to the outlying villages, lending his services where they were needed. Eretria always accompanied him, a skilled aide to her husband by now, trained nearly as thoroughly as he in the care of the sick and injured. It was a journey they need not have made—­would not, in fact, had they been less conscientious than they were. Others would not have gone. But Brin’s parents were governed by a strong sense of duty. Healing was the profession to which both had dedicated their lives, and they did not take their commitment to it lightly.

While they were gone on these trips of mercy, Brin was left to watch over Jair. On this occasion, Rone Leah had traveled down from the highlands to watch over them both.

Brin’s mother looked up from the last of her packing and smiled as Brin entered the bedroom. Long black hair fell loosely about her shoulders, and she brushed it back from a face that looked barely older than Brin’s.

“Have you seen your brother? We’re almost ready to leave.”

Brin shook her head. “I thought he was with father. Can I help you with anything?”

Eretria nodded, took Brin by the shoulders, and pulled her down next to her on the bed. “I want you to promise me something, Brin. I don’t want you to use the wishsong while your father and I are gone—­you or your brother.”

Brin smiled. “I hardly use it at all anymore.” Her dark eyes searched her mother’s dusky face.

“I know. But Jair does, even if he thinks I don’t know about it. In any case, while we are gone, your father and I don’t want either of you using it even a single time. Do you understand?”

Brin hesitated. Her father understood that the Elven magic was a part of his children, but he did not accept that it was either a good or necessary part. You are intelligent, talented people just as you are, he would tell them. You have no need of tricks and artifices to advance yourselves. Be who and what you can without the song. Eretria had echoed that advice, although she seemed to recognize more readily than he that they were likely to ignore it when discretion suggested that they could.

In Jair’s case, unfortunately, discretion seldom entered into the picture. Jair was both impulsive and distressingly headstrong; when it came to use of the wishsong, he was inclined to do exactly as he pleased—­as long as he could safely get away with it.