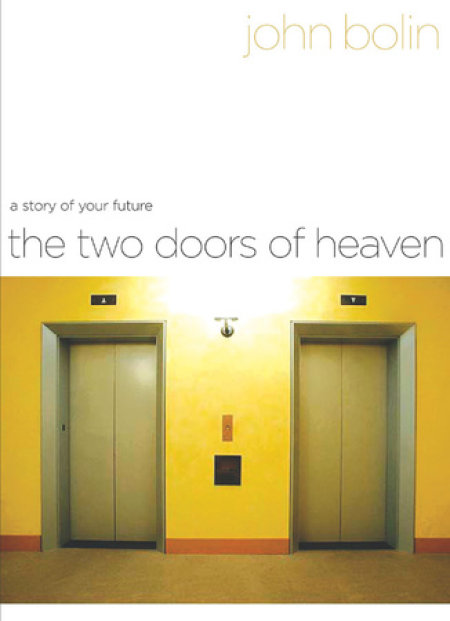 The Two Doors of Heaven

In this evangelistic book, John Bolin follows a fiction-meets-nonfiction approach to lead readers to a surprising encounter with Jesus—as they ponder the reality of heaven and how to get there.

The Two Doors of Heaven begins with an extended story of Jack, a guynext- door kind of person who is killed in a freak accident while sitting at a coffee shop. He awakes in the afterlife and is taken on a journey toward his moment of judgment before God. Along the way he meets several people who help him unravel life’s meaning.

The second part of the book is like a personal conversation with the author. Bolin anticipates the questions and reflections readers have and helps them explore the real issues faced in regard to the two doors of heaven.

“Every one of us has a reason— for what we do, for where we end up…”

Journey with a man named Jack to the other side of eternity. After dying in a freak accident, he enters the afterlife with four others. In this new, hyper-real existence, they each see a vivid replay of their lives, complete with answers to haunting questions. Then comes the startling truth about what happens next.

Two doors appear. One leads up. The other…down. Which will it be?

Jack’s inevitable destiny echoes the choices he made on earth. What if you could control where you’re headed?

Maybe you can. Find out what the two doors of heaven reveal for you…

Story Behind the Book

“In The Two Doors of Heaven, I want to lead non-Christians down the pathway toward a genuine encounter with Jesus. I want to catch their attention, then capture their hearts. My sense is that people today are increasingly haunted by questions about the life after this one. Vast numbers of them are not suppressing the issue of what eternity will mean for them personally, but are actively exploring it (as evidenced by the sales of books like The Five People You Meet in Heaven ). They sense that what they do and think and believe today has a definite connection with getting into heaven—but they’re by no means clear about it.”