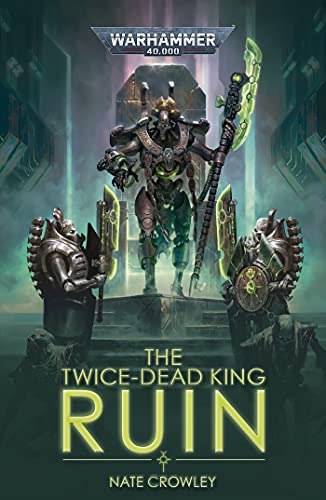 Pride is everything for the dynastic kings of the Necron race, who have awakened after millennia to see their empires occupied by foul beasts and simple minds. For the Necron Lord Oltyx, the Ithakas dynasty was his by right, but the machinations of the court see him stripped of his position and exiled to a forgotten world.

READ IT BECAUSE
See the struggles of the Necron court through their own eyes, and discover the lengths one Lord will go to for the status they desire.THE STORY
Exiled to the miserable world of Sedh, the disgraced Necron Lord Oltyx is consumed with bitterness. Once heir to the throne of a dynasty, he now commands nothing but a dwindling garrison of warriors, in a never-ending struggle against Ork invaders. Oltyx can think of nothing but the prospect of vengeance against his betrayers, and the reclamation of his birthright. But the Orks are merely the harbingers of a truly unstoppable force. Unless Oltyx acts to save his dynasty, revenge will win him only ashes. And so he must return to the crownworld, and to the heart of the very court which cast him out. But what awaits there is a horror more profound than any invader, whose roots are tangled with the dark origins of the Necrons themselves.

Oltyx, The youngest scion of the Ithakas Dynasty; once kynazh and second in line to the throne, but now exiled and appointed as Nomarch of Sedh for the last three centuries.

Zultanekh, Heir to the throne of the Ogdobekh Dynasty, and a commander of their forces.

Strategic, Derived from Oltyx’s abilities as a general and a logician.

Xenology, Derived from Oltyx’s grudging interest in, and loathing for, alien species.

Mentep, A cryptek from an unknown dynasty, who has come to Sedh to research the flayer curse. An engrammancer.

Yenekh, High Admiral of Sedh, known as the Razor for his prowess in Szarekh’s war, and one of the world’s few remaining nobles of high rank.

Neth, Praetor of Sedh, and warden of the garrison, assigned to the service of the nomarch.

Lysikor, A low-ranking noble from elsewhere in Ithakas, who is technically a nemesor after killing everyone who outranked him before they could wake.

What is this self inside us, this silent observer,

Severe and speechless critic, who can terrorise us

And urge us on to futile activity

And in the end, judge us still more severely

For the errors into which his own reproaches drove us?

– Verse attributed to the scribe Eliot of Britania,
in the first millennium of the Age of Terra

Do not speak arrogantly, my friend; why give water to a beast at dawn before its slaughtering in the morning?

– Fragment of a text by Imenyâs-son-Imena,
of Ancient Gyptus, predating the Age of Terra