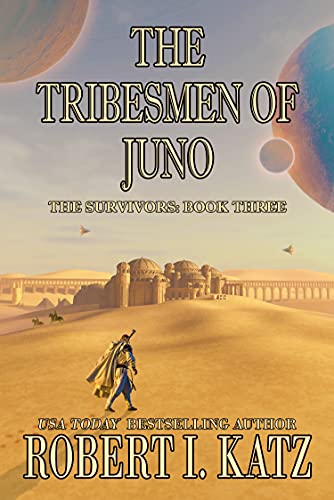 The Tribesmen of Juno: The Survivors: Book Three

From USA Today bestselling author, Robert I. Katz, comes The Tribesmen of Juno, Book Three of The Survivors.

Thirty years ago, Terence Allen left his father's home in the city of the Viceroy, and under the assumed name of Blake Pierce, gained both fame and fortune, first as a wandering ronin, then as a mercenary commander. Now, Blake Pierce is the Duke of Taverno, and he controls half the nation of Venecia.

Blake Pierce is a power in the world, but the cities that owe Taverno loyalty are being bribed to switch allegiance to his principal opponent, Benedetto Corsi, the Duke of Siena.

In far away Fomaut, the Primate has been assassinated. Wolford is beset by unknown forces.

All over the continent, unrest is stirring.

Men are digging into the ruins of the dead cities, seeking riches and the weapons of the nearly forgotten Empire. The industrial revolution encouraged by Blake is slowly grinding to a halt.

For three thousand years, the Viceroy has ruled over all the nations, rarely exerting his authority but tolerating no opposition to his reign. Only the Viceroy retains any remnant of the Ancient's lost technology. Many men have tried to challenge the Viceroy. All have been crushed.

But the seven nations are stronger and richer than they were, and the Viceroy has expended much of his hoarded arsenal. Has the time come to finally throw off the Viceroy's rule? Or will Taverno turn into just another dead, radioactive city?

Blake would prefer not to find out, but unseen forces are moving against him, and in the end, he may have no choice but to fight back or lose everything he has gained, including his life.