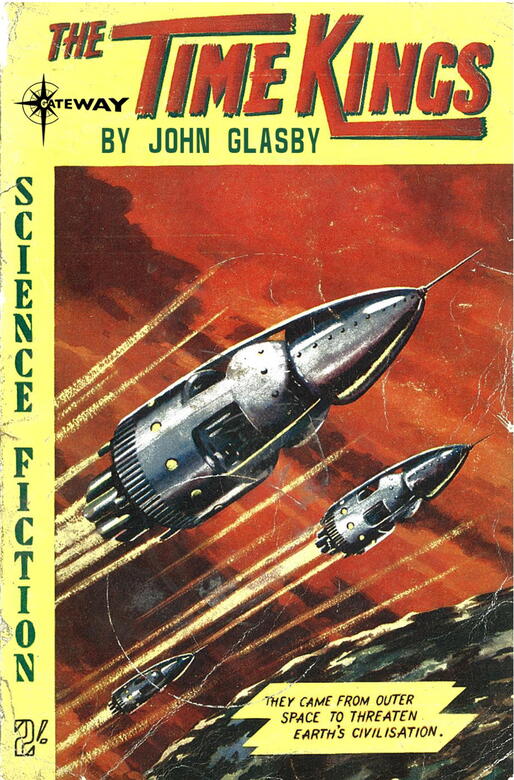 They came out of the long grey ages of Time, killing and plundering, and their object was to take back captives to appease the blood-thirsty mobs. The city was burning when Paul Sanders drove into it that wet and foggy evening, the streets filled with tall, cruel-faced warriors. Taken prisoner by them, he and a handful of others found themselves transported in Time to the world of a million years hence. A strange world filled with the weirdest anachronisms where a superstitious people were held in thrall by three men, the Time Kings, who alone knew the secret of time travel. The ancient knowledge had been destroyed by a people smarting under utter defeat. During the long ages there had been three Interstellar Empires when Earth had reigned supreme throughout the galaxy, but it remained for a group of men from the early dawn of the Atomic Age to overthrow the anarchy which prevailed and to restore Earth to her previous position of greatness, leading the people back to the stars which were their destiny.

Just ahead, set off the main road, the massive facade of Atomics Incorporated loomed, half-hidden in the December twilight and the swirling banks of fog. Paul Sanders pulled his car into the now deserted kerb, switched off the ignition and squinted appraisingly into the gloom.

For some strange reason, there was an unusual tingling up and down his spine and a prickling sensation running along the nape of his neck. He was a square-built man, tall, but his apparent height was reduced somewhat by the width of his shoulders and chest, and the curious rippling, almost animal-like grace of his movements. He took a deep breath and slammed the door of the car, locking it carefully and slipping the keys into his pocket.

For a moment, hesitation was strong within him. It was hard to understand the tremendous work that was going on behind those stern and somewhat forbidding walls that fronted him.

He had looked then at the great building on the edge of town with a kind of yearning fear, little guessing that one day he would be working there, learning and exploring the ways of the universe. That was when he had been very young.

In university, he had learned the history of atomics and the part that the giant computers and machines played in establishing a community of nations, providing a stable anchorage for a world which might well have exploded into swirling, primeval vapour without their aid.

He had learned of the first mistakes which had driven Man to the point of extinction when the impetus of human greed and brutality had swept to a standstill.

Then he remembered why he was there and snapped himself out of his reverie. The warning had come as he had sometimes suspected it would and the low rumble of traffic along the main by-pass outside the distant town was a muffled accompaniment to the riot of thoughts that whirled inside his brain.

Something was wrong with the great atomic furnace that lay in the very heart of the building. At the moment, with the meagre information he had available, he could not even visualise the extent of the trouble.

There were two distinct possibilities: That it was a transient thing which would most likely right itself or could be repaired in a few hours, or that it was something really catastrophic that would put the machine out of commission for a very long time. If it were the latter case, the mutual trust with which the scientists and the mass of the people lived side by side, would be tested as never before.

Sections of the community had been brought into contact that could never endure for any length of time on the slender basis of mutual trust alone—because they didn’t really possess it. They were being led like children along a path of darkness with few pointers to light the way.

So thin a knife-edge; so deep an abyss of ruin and chaos if anything went wrong. Atomics Incorporated was a dyke, holding back a flood of ignorance and fear.

Inside the block, he took off his everyday suit, hung the jacket on the metal peg bearing his number, packed the other items carefully in the special plastic containers and laid them out in a neat row on the cold metal bench.

The muscles around the edge of his mouth tightened stiffly and formed a hard smile as he stood waiting. He shivered slightly in the cold rush of air that swirled about him. Reaching up, absently, he fingered the identity disc around his neck and then stepped through the open door at the end of the long room.

Here, there was a narrow passage that wound away around a bend in front of him where there was a steel inset shining with the warm glitter of long mirrors.

His body felt suddenly warm. Invisible ultraviolet and infra-red rays beat down upon him from hidden projectors. There was a faint click overhead. An X-ray camera opened a lazy eye, rattled and clicked softly.

There were other things too. Of course, there had to be. Magnetic and electronic devices, complicated and necessary, that were neither seen nor heard.

But in spite of all this, they had their individual roles to play. He knew nothing of it when a Geiger counter frisked him automatically for traces of radiation. It clicked off silently as he passed into the room which lay beyond.

He submitted to this impersonal probing of his body good-naturedly. It had been going on for a long, long time now. In a vague sort of way, he had grown used to it. Something which, in the beginning, he had resented much as one would resent the continued stare of an animal. Now, he accepted it philosophically as an unwelcome necessity.

After all, they were only machines.

The door closed softly behind him.

“Always the same,” he breathed. “That eternal frisking never seems to end. It always makes me feel jumpy walking along that corridor with those damned eyes watching me from somewhere out of sight.”

“Guess it’s all for your own good, Doctor Sanders,” said the official behind the desk.

“I suppose so.” Sanders waited patiently while the other went over to the numbered plastic rack at the back of the desk and pulled off a plastaloid key. Outwardly, there was no sign to show that the other was a member of a military organisation. The long, white, banded overall gave him the appearance common to the scientists.

Sanders took the key to his locker with a brief nod. The sound of his bare feet on the white marble floor was a little pattering of whispers.

There was a noise like a distant fire roaring and crackling away to itself in the distance and a humming, humming that seemed to fill his entire brain. It very soon became a part of the air in the room and then a part of him so that it was something that could never be entirely divorced from his mind. He felt his lids blink over a hard, fixed stare.

Swiftly, he put on the belted white overalls with their red number stamped on the chest and their cross-over tapes that fastened without the need for buttons. All traces of metal had been meticulously removed.

Last of all, he clipped the fluorescent ray counter to his pocket, secured his locket and took the key back to the official.

“Doesn’t it make you feel God-damned important working in there?” asked the official. “Keeping the cities running. The machines. Making sure that nothing ever happens to stop the power flowing, because without it——”

“We’d all be as good as dead.” Sanders finished it for him.

“Yes. Nuclear power,” said the man behind the desk softly. He spoke almost reverently. “You know, I sometimes get to thinking about it at nights. Do you realise that this power we have in here is about the biggest slice of midnight blackness there is in the whole of creation?”

He nodded to himself. “It starts in there in that infernally-humming machine and then goes out and swells into a million shapes and colours, running along the wires between wooden posts and poles, keeping the life of the towns and cities running. Without it, they’d stop. Everything would stop. Completely.”

“Tremendous? I’ll say it is.” The other smiled absently to himself, moving across to the concealed button that operated the inner door. “Sounds like some kind of lonely animal, doesn’t it? At times, you know, I think it’s alive somehow. Sitting in this office, listening to it day after day, night after night.”

“You’re imagining things,” said Sanders harshly. He laughed, but deep down inside, he felt shocked by that statement.

“Maybe,” answered the other thoughtfully. “But I get the damnedest feeling, sitting here listening to it.”

“You can imagine any kind of thing if you listen long enough.” Sanders stepped through the inner door and heard it lock itself quietly behind him.

There was a tiny shiver of excitement in his brain. It faded to a sub-surface tingle as he walked forward. The vast lead-walled room seemed to stretch away and sway into the distance as far as the eye could see; and upwards until it almost vanished into the curving immensity of the roof.

The pulsing closed about him like a softly humming blanket. The shrilling went on and on, higher and higher in pitch until it was everywhere, but this time there was something about it that wasn’t quite right, a throbbing subsonic that he couldn’t identify.

Here, he thought savagely, was the real power of the human race; that on which it ultimately depended. A complex, ringing, shivering, throbbing, surging power that muttered between the great walls like the low rumble of distant thunder.

A centre wheel spun so fast that it was standing still. Great, shining copper snakes linked positions on the walls and there was a snapping, eating sound and blue fire that licked through the invisible atoms of the air and crashed between wire and porcelain from insulated coil to insulated coil.

Haloed electric sparks jumped and murmured along the bent arms of coated piping and wire. Turbines whirled and hummed and spun their circular flowers of steel between brushes that touched like bees and robbed them of their power.

He felt a sudden insane urge not to stay in this place; to get out and run into the real, everyday world that lay somewhere outside, the worl. . .