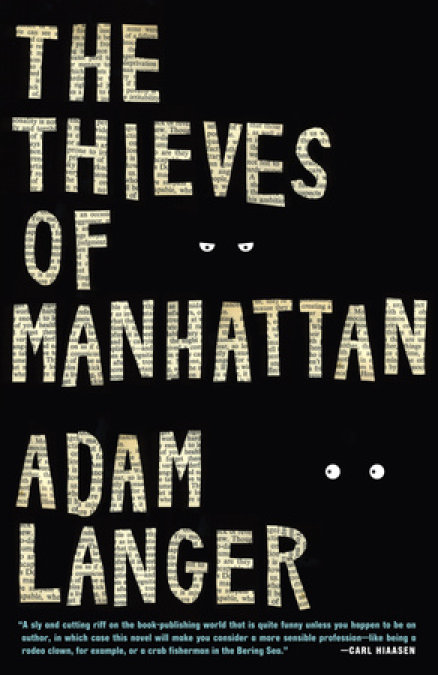 In a starred review, Publishers Weekly calls The Thieves of Manhattan a “delicious satire of the literary world.” Here Adam Langer introduces Ian Minoit—an aspiring writer who just can’t seem to get published. When Ian’s successful girlfriend leaves him for the talentless hack Blade Markham—whose acclaimed memoir Ian is convinced is a fake—he can’t understand why he always gets the short end of the stick. Then an opportunity for revenge shows itself when an editor asks Ian to take his novel of murder and thievery and pass it off as a memoir. 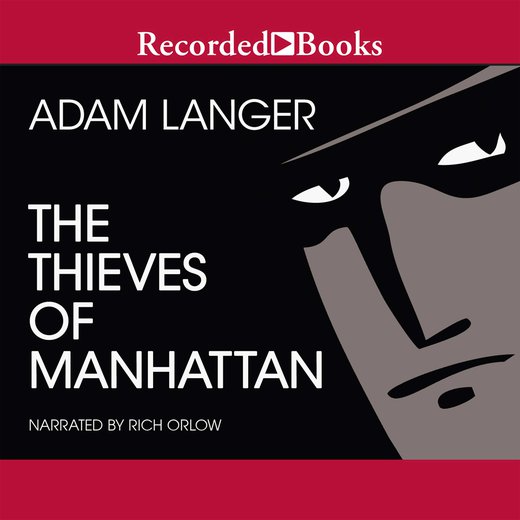 To tell you the truth, I’d have noticed the guy even if Faye hadn’t pointed him out to me. He was slicker than the usual Morningside Coffee crowd—off-white linen suit, black silk shirt buttoned to the throat, Jonathan Franzen–style designer glasses—but what made me stop wiping tables and look just a bit longer was the fact that he was reading a copy of Blade by Blade. That autumn, it seemed as though Blade Markham’s book was everywhere—every subway station corridor had posters with that canary yellow book cover on them; every bookstore window displayed a cardboard cutout of a glowering Blade sporting a nine o’clock shadow; half the suckers who sat next to me on the bus were reading that so-called memoir.

Faye, strands of red hair dangling past her olive green eyes from under her Morningside Coffee visor, was humming “Dust in the Wind” and absentmindedly drawing a sketch of the guy on her notepad. She’d written “Confident Man” underneath it. That’s how the name stuck with me. Meanwhile, bitter, gossipy Joseph, all 315 pounds of him, hunched over the counter, going over lines for an audition, vainly hoping that some casting director wanted a guy his size with white-boy dreadlocks, flip-flops, and a goatee. It had been another slow night, and now the Confident Man was the only customer left in the shop.

“Too bad his taste in books doesn’t match his taste in clothes,” Faye said to me. She smiled and returned to her sketch.

Faye Curry was probably already trying to flirt with me then, but I had a girl, Anya Petrescu. Just about everything Faye said tended to go right past me anyway. Artsy and bookish guys always lurked at the counter and chatted her up because she had a droll wit and liked to be distracted when she was working, but she was way too subtle for me. She had the looks and smarts I tended to notice only after the fact, usually after the woman in question had gotten engaged to someone else or had already left town or had decided she was done with men. Back then, with her torn jeans, baseball caps, vintage concert shirts, and paint-spattered boots, I wasn’t sure if she was into guys anyway. So that night I wasn’t focusing on the fact that she was grinning at me instead of scowling, that she was wearing perfume or maybe using new shampoo. That night, I was more interested in the book the Confident Man was reading.

“Bogus pile of crap,” I muttered. I didn’t realize I’d said it out loud. But Joseph shot me a glance and Faye smiled at me again as if both of them had heard. I looked back down and went on wiping the tables, putting the chairs up, trying to stop thinking about that book and Blade Markham.

Just the night before, during yet another bout of writer’s block and insomnia, I’d been flipping channels when I stumbled on Markham blowing hard on a rebroadcast of Pam Layne’s daytime talk show. There the guy was, hawking his memoir on the biggest book show going, yammering about his heroin addiction and the time he spent with the Crips and the month he went AWOL during the first Gulf War and his conversion to Buddhism and whatever else he’d made up and sold to Merrill Books—a half million bucks for the North American rights alone. I didn’t believe a word of it, but Layne’s studio audience couldn’t get enough, gasping and clapping and laughing as Markham spouted one lie after another. All the while, Pam Layne kept up her credulous questions, using street slang that must have been written on cue cards by whichever one of her assistants had actually read the book:

“Naw, that ain’t too likely,” Blade told Pam. “You know, sistuh, the punks I wrote about in my book, they all dead, yo.”

Up there on that TV talk show set, Blade was acting like some old-school hip-hopper, throwing his arms out, crossing them over his chest, flashing made-up gang signs, ending all his sentences with “yo,” even though he was probably just some rich boy from Maplewood, New Jersey, whose real name was Blaine Markowitz—that’s what Anya and I used to joke anyway. Everything about Blade Markham seemed like some kind of lie—his words, his shabby outfit that he’d probably planned out a week in advance, even the cross he wore around his neck.

“It ain’t a cross for Christ; it’s a T for Truth, yo,” he told Pam Layne. That’s when I flipped off the TV, went back to bed in my clothes, and tried in vain to think of a story to write, tried in vain to get some sleep.

Now here in the coffee shop was the Confident Man, one more Blade Markham fan than I could stand. So when I went over to his table and told him we were closing and that he had to scram, I might have sounded harsher than I intended. Faye bust out laughing, and Joseph, who seemed always to be looking for just the right time to can me, flashed a “one more outburst and you’re gone” glare.

The Confident Man dog-eared a page of his book, put on his black cashmere gogol, belted it, went over to the tip jar, and stuffed in a twenty-dollar bill, which just about doubled our tips for the night. He walked out onto Broadway without saying a word.

“Think that guy craves you,” Faye said, raising one eyebrow. Joseph snickered—jokes at my expense always cracked him up. I finished cleaning, collected my share of the tips from Joseph, said sayonara to Faye, and headed down to the KGB Bar to meet Anya. By the time I got there, I was still stewing about Blade by Blade, but I had all but forgotten the Confident Man.