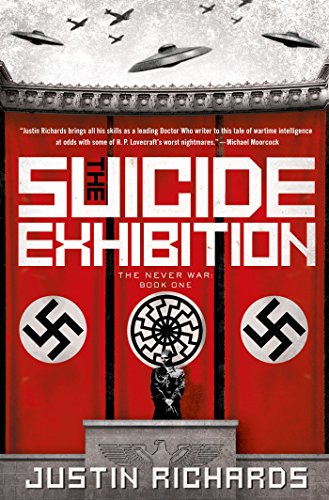 The threat is not new. The aliens have been here before.

The German war machine has woken an ancient threat - the alien Vril and their Ubermensch have returned. With this new power, ultimate Victory in the war for Europe is now within the Nazis' grasp.Obsessed with the Occult, Hitler and other senior Nazis believed they were destined to inherit the Earth. To this end, they are determined to recover 'their' ancient artifacts -- the Ark of the Covenant, the Holy Grail, the Spear of Destiny. When Dunkirk veteran and Foreign Office trouble-shooter Major Guy Pentecross stumbles across a seemingly unbelievable conspiracy, he, together with pilot and American spy Sarah Diamond and SOE operative Leo Davenport, enter the shadow world of Section Z. All three have major roles to play as they uncover the Nazis' insidious plot to use the Vril's technology to win the war... at any cost.

Justin Richards has an extremely credible grasp of WWII history and has transformed it into a groundbreaking alternate reality thriller in The Suicide Exhibition.

It was a day of heavy air raids on the south east of Britain. The sky was filled with noise and death. If there had been anyone to see Sergeant Green and his troops at Shingle Bay, the chances are their eyes would have been turned instead to the heavens. Their attention would have been drawn by the distinctive grumble of the Rolls-Royce Merlin engines that powered RAF Hurricanes and Spitfires against the might of the Luftwaffe.

As the evening drew in, so the skies emptied. Britain held her breath, not knowing that the next day would bring RAF Fighter Command her heaviest losses of the war so far. Unaware of what would happen that night.

"You sure about this, Sarge?" Private Goodall asked.

"This is war, son," Sergeant Green told him. "No one's sure about anything."

"You got the shivers?" Private Wood asked, grinning.

"Shut it, both of you," Green said. He had the shivers even if the other two hadn't.

They made their way back up the steep cliff path, and took up position behind a screen of bushes and grass, sheltered by the bulk of the nearby church.

"We really going to stop an invasion?" Wood asked.

Green stared out through the curtain of vegetation, binoculars clamped to his eyes. "If we have to."

"How will I know?" Wood wondered.

Goodall had been at Dunkirk. "You'll know," he said.

"Just you be ready at that valve," Green warned.

The pipeline was like a huge, dark snake curling past their position and down the side of the cliff. It split into smaller pipes on the beach below, spreading out like a black spider's web across the shingle before disappearing under the water.

The three soldiers settled down to wait. It could be a long night. For now the only sound was the waves dragging back over the pebbles on the beach below.

Dusk was drawing in before anything happened.

"Can't see anything," Green told him.

Green scanned the sky. Finally he spotted it-flying high and approaching along the coast from the south.

It was a large transport plane, lumbering its way on some logistical mission under the cover of approaching darkness.

The note of the aircraft seemed to change as it approached. It became deeper, discordant, and then resolved into two different sounds. Green scanned the sea, peering out as far as he could into the gathering dusk. There they were-he just hoped the aircraft didn't spook them ...

"Ready, lad?" Green was whispering, though there was no way the men in the approaching boats could hear him. "Do it now."

Wood nodded nervously, reaching for the metal wheel jutting from the side of the pipeline. It squeaked as it turned. Beside him, Goodall shouldered his rifle, scanning the beach below.

Holding the binoculars steady with one hand, Green scrabbled for the flare pistol with the other. "Not a moment too soon," he breathed.

There were three boats, each containing half a dozen men. He could make out the individual soldiers now. He could see their grim, determined faces, their field gray uniforms and their rifles. At the prow of the last boat, one man stood staring toward the beach. His pale, hollow features and his wispy blond hair were clear in the binoculars despite the fading light. He seemed to be staring back at Green through dark, sunken eyes-challenging him to do his worst.

Well, thought Green, that was a challenge he was happy to accept. With gallons of fuel flowing rapidly down the pipeline and bubbling up into the bay, Green raised the flare pistol.

In a stone-built room lit only by the flickering light of burning oil, Number Five was drawing, oblivious to his surroundings and the two men watching. His pencil scratched frantically across the paper, sketching outlines, impressions rather than details. As soon as the drawing was finished, he pushed it across the stone desk, and started on the blank sheet of paper beneath.

The sound of pencil on paper mingled with the guttering of the lamps. One of the two men standing beside the desk lifted the latest drawing and angled it toward the nearest wall sconce.

"They are almost there."

The other, shorter man, nodded, taking the drawing. The light glinted on his small, round spectacles as he examined the picture. Two boats, heading toward a curving beach. Pale cliffs rose up above banks of shingle. The men in the boats were barely more than silhouettes, guns at the ready. The scene was pictured as if from a third boat, just behind the first two.

The spectacled man placed the drawing on a stone table beside him, aligning it carefully and exactly with the stack of pictures beneath.

Number Five stared into the distance, not seeing the men standing in front of him. Not seeing the drawing evolve on the paper. Intent only on the images in his mind's eye.

The new drawing was similar. The boats closer to the beach now. Perhaps a hint of restlessness in the posture of the men. And high in the sky, a point of light like a blossoming star.

The shorter man frowned. "What is that?"

The flare lit up the sky like an elongated burst of lightning. Green had aimed long, so that it was still burning incandescently as it fell toward the sea. As it reached the water in front of the boats. As it touched the film of oil slicked across the sea.

The single point of brilliant light burst into a fireball spreading out over the water. A wave of flames, crashing down on the shoreline and rushing out toward the approaching boats. In a moment, it engulfed them.

It was like a painting of hell. The whole sea was ablaze. Green could hear the shouts and screams of the men in the boats. Between the sheets of flame, he caught confused glimpses. Burning men diving into the water. The skeletal carcasss of the fire-eaten boats. The man in the prow of the third boat-still standing staring toward the shore. Unmoving even as the flames licked at his smoldering uniform ...

Goodall's rifle tracked back and forth as he waited for a target. If any of them made it to the beach, they'd be easy pickings. But Green could tell that none of them would.

"You can shut off that valve now," he told Wood.

The man's face was shining with sweat as he turned the wheel. They could all feel the heat coming off the sea. Slowly, the flames died down, the smoke thinned, and the screaming faded into the cries of the frightened seagulls.

It was a drawing of hell. Number Five's hand jerked painfully across the page, the pencil almost ripping the paper. The heavy metal bracelet round his wrist scraping against the stone desktop. Jagged spikes of flame. Shaded smoke. The distorted suggestion of men's agony.

And through it all, Number Five was screaming. Mouth open, head back, screaming in pain.

His skin seemed to shrink back from his cheekbones, blackened and dry. Blistering, peeling, smoking from the heat of the fire. His hand was a mess of charred bone, pushing the paper aside and starting on the next sheet. By the time he slumped forward in a smoking heap, all he had drawn was a mass of flames.

But still he was screaming. The last skin was seared from his skull. Eyeballs ran with tears of their own molten flesh. His body convulsed. Number Five clawed at the table. There were blackened scorch marks across the surface where his fingers had gripped it. The pencil clattered to the floor.

The two men watching said nothing. The shorter man snatched up the final drawing-a pencilled mass of flame and smoke. He stared at it for a moment, the fire from the nearest wall sconce reflecting in his glasses. Then Reichsfuhrer Heinrich Himmler screwed the paper into an angry ball and threw it across the room.

The paper hit the wall, and dropped into the sconce below. It rested intact for a moment in the pool of burning oil, then burst into smoky flame.