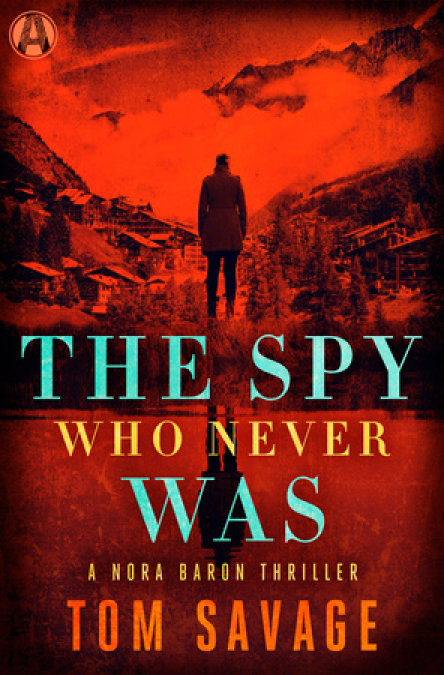 “Tom Savage is a master of the high-speed thriller.”—Michael Connelly

In a Manhattan safe house, Nora Baron—a Long Island mother and drama teacher leading a double life as a CIA operative—meets a spymaster who offers her a top-secret mission. Nora is to take on the role of Chris Waverly, a legend in the field—literally. As Nora’s handler explains, Waverly isn’t so much a person as she is an alias, a cover name shared by several American agents throughout the world. Now, a mysterious ransom note threatens these agents with exposure and certain death.

As the new “Chris Waverly,” Nora travels to Paris to trap the anonymous blackmailer. But from the start, the mission is more dangerous than she could have anticipated. She encounters secrets and lies from her own people, and she’s stalked by shadowy assassins. From the City of Light to a remote village high in the Swiss Alps, Nora follows the trail to a chilling international conspiracy—and the shocking truth about “Chris Waverly.”

Be sure to read all three titles in Tom Savage’s exciting Nora Baron series:
MRS. JOHN DOE | THE WOMAN WHO KNEW TOO MUCH | THE SPY WHO NEVER WAS

And don’t miss his standalone thriller A PENNY FOR THE HANGMAN!

Nora Baron stood on the sidewalk, gazing up at the safe house. It was in a row of handsome three-story town houses on the quiet tree-lined street in Greenwich Village, a graceful façade of dark red bricks, blue-gray trim, and blue-gray shingles on the mansard roof. The bay window glinted in the sunlight, and black wrought-iron railings gleamed on the front steps and window guards. The door was painted the same bright blue-gray as the shingles and frames. It seemed an oddly cheerful place to hold a clandestine meeting.

She smiled at a young couple who passed by her; they smiled back as they turned onto Grove Street and entered Sheridan Square. Nora wondered if this location had been chosen for her benefit; her apartment was mere blocks from this house. She’d walked here in just under ten minutes, moving lightly in the mild spring afternoon. She didn’t really need the black linen jacket she wore over her blue blouse and black skirt, but it made her feel professional. She’d pulled her shoulder-length chestnut hair back from her face and clipped it with a barrette, and her trusty black Coach shoulder bag and favorite black boots completed her ensemble. She hoped she looked like a talented, middle-aged, Irish-American wife, mother, actor, and college drama teacher who occasionally took assignments from her husband’s employers. Nora Baron: spy.

She looked down the block toward Sixth Avenue. Across the avenue was the campus of Nora’s alma mater, New York University, where her daughter was currently a senior in the theater arts department. Dana’s graduation was in June, and July would bring Nora’s birthday. The Big Five-O. Ugh. She wouldn’t think about that now . . .

At exactly four o’clock, she climbed the steps to the front door and rang the bell. The young woman who answered it was dressed similarly to Nora, but her jacket and skirt were gray, and she wore a wireless gray earpiece. She even had a tiny gray heart-shaped tattoo on one wrist. This made Nora smile, because gray was the signature color of the CIA. Clothes, cars, electronics—everything these people used was typically a neutral, unobtrusive shade of gray.

The house was no exception. The exterior was all cozy Greenwich Village, but the living room into which the smiling young woman led her was a sleek symphony composed on the CIA’s favorite theme. Pale driftwood for the walls, silver velveteen on couches and armchairs, pewter drapes and carpet. A narrow staircase on one side led to the upper floors, and a gray marble fireplace dominated the other long wall. The woman continued through the room to the sliding gray doors at the back, slid the doors open, and stepped aside to allow Nora to pass.
The town house was clearly laid out in a classic pattern. This was the dining room, with a swinging door on the opposite wall that would lead to the kitchen at the back of the building. The second floor would be the master suite, with two bedrooms and a bath on the top floor. The dining room continued the gray theme: gray marble floor, pale gray walls, pale gray ceiling with an iron chandelier above the mahogany dinner table. A gray laptop computer lay on the otherwise bare table. The room was in the exact center of the ground floor, which meant no windows. It was the most secure place in the house, she imagined, perfect for this meeting. Welcome to Spyland, she thought as she focused her attention on the only other person in the room.

The man who stood beside the host chair at the head of the table was definitely a spy—or, rather, a spymaster. Tall, Caucasian, silver-haired, sixtyish; he wore the requisite dark gray suit and tie. The word patrician could have been coined to describe him. Beyond his handsome face and expensive clothes, he had an air of authority that identified him as the person in charge. He came over to her, extending his hand.

“I’m Edgar Cole,” he said as they shook. “Thank you for agreeing to meet me, Mrs. Baron.”

“Okay, Nora. I know you’re not technically on our payroll, but something’s come up that you might find interesting. I hope so, because we could use your talents on this.” He pulled out the dining chair on the immediate right of his own seat at the head of the table and waved her into it.

As Nora sat in what she couldn’t help noticing was the guest-of-honor chair, the kitchen door swung open and a young man in a gray suit came in with a silver tray. So, refreshments were to be served. Good. The young man had long, unruly brown hair, bad skin, and thick glasses. He poured chamomile tea into two cups, adding two teaspoons of honey to one of them. He placed the sweetened cup before Nora, then served his boss and retreated through the swinging door. She knew he’d be stationed in the kitchen, just as she knew he’d be armed. The young woman in the living room would be armed as well. Whatever was about to happen here was clearly Top Secret. Eyes Only. Hush-Hush. Nora braced herself for what her show business colleagues would call the big reveal.

She didn’t have long to wait. Mr. Cole, who had not invited her to call him Edgar, resumed his chair and opened the laptop near his cup and saucer, angling it toward both of them. The screen came to life, filled with an expert artist’s sketch of a woman’s face. Nora glanced at the picture and looked away, then looked again. She peered more closely at it, feeling a thrill of intrigue. She maintained a calm demeanor, willing herself not to show any outward anxiety. In a neutral tone of voice, she said, “Who is this woman?”

“Chris Waverly,” he replied. “Code name: Rose. One of our operatives. She could go anywhere, retrieve anything—even the most secure information—and vanish. She was a shadow, a legend. Her assignments over the years have helped our government immeasurably; I can’t begin to count how many lives have been saved and sticky situations avoided, thanks to her. I was Rose’s handler, and we kept her identity heavily guarded. She was one of the best agents the Company has ever had.”

Nora studied the man’s face. “Was?”

He nodded, emitting a little sound Nora interpreted as a regretful sigh. “Yes, was. She was killed three months ago—about the same time you were operating in Venice. Chris Waverly died in January, but now something’s happened, something very ugly and very immediate. We need Rose to be alive and active again.”

Nora looked at the picture, then back at the executive from the head offices in Langley, Virginia. “I don’t understand. She must have family, friends, associates. Her death couldn’t have gone unnoticed, could it?”

Mr. Cole shrugged. “Actually, it wasn’t noticed at all. I’m going to let you in on a secret, Nora, but it can’t leave this room. Not even your husband can know. You understand?”

He turned his gaze from the screen to Nora. “You must have noticed the resemblance. You did, didn’t you?”

She nodded. “For a moment, I thought that was a picture of me.”

“Yes. Think about that agent’s name. Then think about where you are right now. Where, exactly, is this building situated?”

Nora thought about it, trying to follow him. “We’re in the Village, near the corner of—” She froze, staring back at the screen as everything fell into place.

“Christopher and Waverly,” Mr. Cole supplied. “Precisely. I named her myself, in this very house, nine years ago. Her code name, Rose, was my grandmother’s name.” He regarded her again. “You see, Nora, Chris Waverly doesn’t exist. She never did. But now, in light of what’s happened, we need her to be real. I’m hoping you can help us with that.”