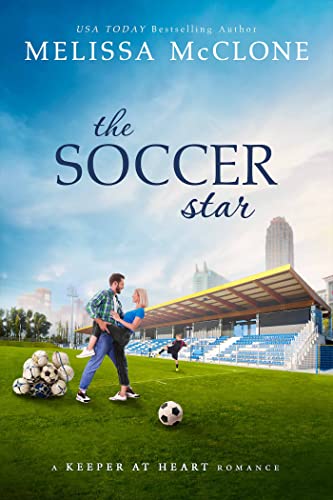 A soccer star and a kind-hearted artist find themselves on the same team, but love is a game they never planned on playing.

Lucy Martin left her small hometown behind after her divorce. Now she's back, caring for her soccer-crazed nephew while his parents are deployed. She'd do anything to make him happy—including approaching her high school crush and current soccer superstar, Ryker James, for a favor.

Nursing an injury, Ryker is laying low at his parents' house until he can rejoin his club and prove he has reformed his bad boy ways. When the sister of an old friend asks him to coach her nephew's soccer team, he should decline. But Lucy intrigues him, and he finds himself unable to disappoint her.

Coaching forces them together and sparks fly—on and off the field. Lucy is wary of romance, and Ryker can’t afford a distraction. Before the final whistle blows, will they take a shot at love or forfeit the match?

Download The Soccer Star today and dive into this clean romance that will have you cheering to the end.

* This is a revised, expanded version of a book previously published as It Started With a Crush.

These men know what they want, and love isn’t on their list. But what happens when each meets a keeper?

A Keeper at Heart Romance series:
Book 1: The Groom
Book 2: The Soccer Star
Book 3: The Boss
Book 4: The Husband
Book 5: The Date
Book 6: The Tycoon