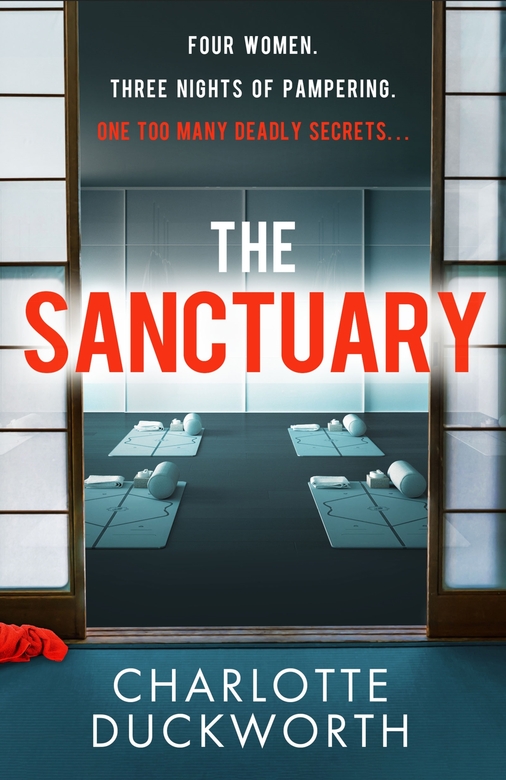 Four women. Three nights of pampering. One too many deadly secrets...

On a remote farm in the deepest Devonshire countryside, four pregnant women arrive at an exclusive yoga retreat for a five-star weekend of prenatal pampering. The location is idyllic.

Their host, Selina, is eager to teach them all she knows about pregnancy and motherhood. But, like Selina, each of the women has a secret.

'The perfect read' LESLEY KARA on The Perfect Father

'A taut, chilling read with a killer twist' THE SUN on The Rival

'A real thrill ride' HEAT on The Perfect Father

'Chilling, complex and unnerving' PHOEBE MORGAN on The Rival

'A brilliant read' CLAIRE McGOWAN on Unfollow Me

Right now, I can’t think of anything I want to do less than go on a yoga retreat. Even worse, a prenatal yoga retreat.

‘Did I say that out loud?’ I say, staring down at my suitcase. ‘I really am losing my mind.’

At that moment, my youngest, Seb, comes screaming into the bedroom and jumps on the bed.

He. Never. Stops. Three years old and he’s hit peak toddler-energy. I don’t even get the respite of a lunchtime nap any more. It’s pure torture.

Sorry, I mustn’t think things like that. It’s pure joy, of course, being his mother. Pure agonising joy.

Seb starts bouncing as Jon grins at him. My head pounds. The contents of my suitcase spring out and onto the bed with every jump.

‘Mummy, I brought your toothbrush and toothpaste!’ Benjamin comes rushing into the room.

The lid of the toothpaste isn’t on properly, and as Benjamin handed it to me, giving it a good squeeze for luck, it covered my hands in sticky paste.

‘Are you sure you don’t want to get away?’ Jon says, passing me a baby wipe. He wraps his arms around Seb.

‘I just feel bad leaving you to cope with these ruffians alone!’

‘I’m sorry, Mummy,’ Ben says, taking the wipe from me and putting it in the bin.

‘Oh, sweetie, that’s OK, it was an accident. And talking of accidents . . .’ I turn to Jon. ‘There’s another reason I’m slightly dreading this trip. Three whole nights of Auntie Bonnie. I’m not sure I can bear it. I can’t begin to imagine how she’s got herself into this situation. You don’t understand, Jon. You don’t know what she’s like.’

‘She’s your sister, and I’ve known her her whole life. I bloody well do know what she’s like.’

Seb squeaks with laughter, clapping a hand over his mouth.

I laugh at my, yes, adorable son and smile at my lovely, supportive, kind husband. I have nothing to complain about.

I’m exhausted, but what pregnant mother of two children under eight isn’t? Nothing unusual about that.

Perhaps Jon is right. Perhaps this break is what I need. It’ll help me get my head together, sort out my feelings once and for all. And Bonnie’s not always difficult. I haven’t seen her for a while. Perhaps pregnancy isn’t the worst thing that could have happened to her. Perhaps the yoga retreat will actually work wonders on us both. Perhaps I’ll get some actual sleep.

Perhaps she’ll finally tell me who the father of her baby is.

I should stop being so cynical.

‘It looks great, you know,’ Jon says, as Seb tries to koala-climb over his back. ‘The views over the valley are incredible. Rolling fields, grazing sheep, the lot. I’m quite jealous. Did you know they were featured in Grand Designsmagazine last year? Eco-build of the year?’

‘Yes, yes, Bonnie told me,’ I say. I know I should be impressed by all that stuff, but really, I don’t have the energy any more. I’m trying to think what would impress me these days. I reckon a night of uninterrupted sleep is the only thing that would do it. But somehow, I don’t think sleeping in a tent in the Devon countryside is going to offer me that either.

Oh God, when did I become such a grump?

‘Sorry, I didn’t think you’d want to see it. You know, it’d ruin the surprise.’

‘No, you’re right,’ I reply. ‘But tell me – please tell me there are baths and proper toilets?’

Jon grins again. It’s endearing, how happy he is with his lot. And I know we are incredibly lucky: plenty of money, a nice house, no health worries, two gorgeous sons, and a bun in the oven.

One anniversary night of passion, and here I am. Pregnant at forty-two with a baby that was never in the life plan.

I was so looking forward to going back to work this year. When I found out I was pregnant I sobbed for hours, but no one seemed to understand. I confided in my only friend with three children, Sarah, hoping she’d get it. But she just told me how wonderful it was to have three.

‘The third really is the icing on the cake. And just think – another year of maternity leave!’ she said, winking.

She didn’t get it. I loved my children, but I missed my job.

And the hardest thing of all is that Jon and I are on completely different pages. He’s so happy about it.

‘There are definitely proper toilets,’ he says, sensing my stress. ‘I don’t think there are baths though. Sorry, Nicks.’

‘No baths! Mummy, you are going to be really smelly!’ Ben says, with fascinated glee.

‘I’m only going for three nights,’ I reply. ‘Mummy will be just fine. Right, you lot, are you going to help me get my luggage to the car?’

‘You’re really going through with this then?’ Jeremy says, spooning cereal into his mouth.

‘How are you even paying for it?’ he says. A line of milk trickles down his chin and he wipes it away on the back of his hand. I roll my eyes. As flatmates go, Jeremy’s not bad, but his table manners leave a lot to be desired. ‘I looked it up and it’s crazy money.’

‘Oh God, nothing, just the usual middle-class angst,’ I say, zipping my bag shut. ‘Nicky was very excited about going back to work. She’s a bit disappointed about having to put that on hold again thanks to baby number three coming along uninvited. That’s all. I guess he feels bad, so this is his way of treating her. Throw some cash at the problem. It’s easy for the men, isn’t it? They get to be parents without having to do any of the hard stuff.’

‘I wouldn’t know and I don’t want to find out,’ Jeremy says, standing up and putting the now-empty cereal bowl down on the one patch of my chest of drawers that isn’t cluttered with stuff.

How the hell am I going to have a baby, living here? How am I actually going to do it? There isn’t even enough room for my own things.

There’s so much riding on this weekend. It has to work out. It just has to. Otherwise I’ll have to see if I can rent somewhere else. Somewhere on my own.

The thought of that is overwhelming.

I look up at Jeremy and he smiles.

‘Love you too,’ I say, and he slips out of the room before I have time to offer him any similarly patronising advice. Like: ‘Take your bloody cereal bowl with you, you lazy bastard!’

I stare down at my rucksack. The woman running The Sanctuary sent over an extensive list of ‘suggested items’ we might like to bring when we booked our place. I read it over again:

Waterproof clothing? Walking boots? Who has all this stuff anyway?

If I’ve forgotten anything then Nicky will lend me whatever it is, I’m sure. She thinks I’m so useless, she’s probably packed two toothbrushes just in case.

Knocked up at twenty-two, during my final year of catering college. That’s how she sees me and my pregnancy. As the literal worst thing that could have happened.

I get it, though. From the outside, my life looks like a mess. After all, at the moment I’m living in a shared student house, one bathroom between four of us. I’ve got the biggest bedroom – the main, at the front of this run-down ’30s terrace – but even so, it’d be a squeeze to fit a cot in here and all the paraphernalia I know comes with babies.

I’ve seen it – the way baby stuff just spreads and spreads until it takes over every available surface, from floor to ceiling. I remember how house-proud Nicky was on the family WhatsApp when Benjamin was first born, telling us all how painstakingly she and Jon tidied away his toys every night, reclaiming their ‘adult time’.

‘It’s important we maintain our identity as a couple, not just as mum and dad,’ she’d declared. Dad had no idea what to make of it, but to me it felt as though she was protesting just a bit too much.

She kept telling us how Benjamin was the perfect baby – the one who did everything by the book – and boy, were they smug about it. And then Seb was born. Ha bloody ha. And now look at them. The last time I went to theirs, the place was a tip. She told me she barely had the energy to tidy up her own crap these days.

I shift over to the mirror, regard my reflection. I’m wearing a loose tie-dye kaftan over some patterned leggings, my ankles skinny against my Buffalo trainers. I’m only thirteen weeks pregnant, and given how scrawny I’ve always been, there’s absolutely no way you’d be able to tell yet, if I’m wearing loose clothes. If anything, I’ve lost weight. I haven’t actually been sick, but I’ve been so worried about how it will turn out that I’ve lost my appetite.

Nicky’s the opposite, eating everything in sight. We couldn’t be more different really. She takes after her mum, I take after mine. But she’s all right, considering she’s twenty years older than me and the only thing we really share is a father. As older sisters go, things could have been a lot worse.

And even though it wasn’t really my intention, this weekend is going to be a good opportunity for us to bond. Spend some more time together.

I smile at my reflection. I’ve been waiting for this weekend for what feels like an eternity, and now it’s finally here.

It’s going to be an interesting few days for sure.

I turn around, shove the last of my things into my rucksack and zip it up, hauling it over my shoulders. Time to go.