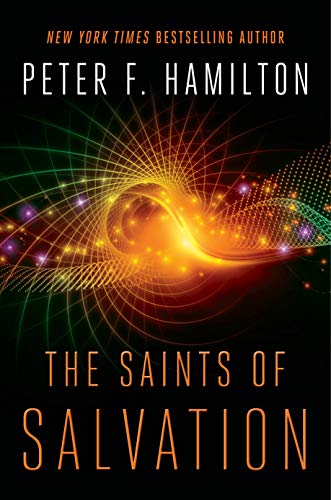 With refreshing determination and hopeful grit, humanity activates a bold endgame against an alien invasion in the finale of a series heralded as “a modern classic” (Stephen Baxter) from “one of the finest writers the genre has produced” (Gareth L. Powell). Humanity is struggling to hold out against a hostile takeover by an alien race that claims to be on a religious mission to bring all sentient life to its God at the End of Time. But while billions of cocooned humans fill the holds of the Olyix’s deadly arkships, humankind is playing an even longer game than the aliens may have anticipated. From an ultra-secret spy mission to one of the grandest battles ever seen, no strategy is off the table. Will a plan millennia in the making finally be enough to defeat this seemingly unstoppable enemy? And what secrets are the Olyix truly hiding in their most zealously protected stronghold? With his trademark optimism about humanity’s tenacity and capacity for greatness, Peter F. Hamilton wraps up this brilliant saga with a bang—and reminds us why freedom of choice is the most important freedom there is. 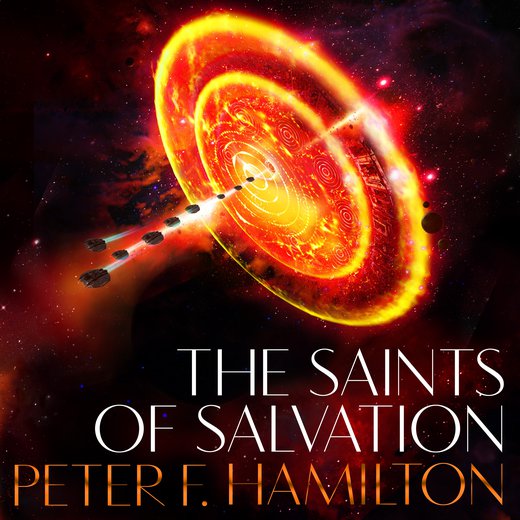 Ahead of the Neána insertion ship, Juloss glowed like a sapphire pearl, its vast oceans and small continents wrapped in long, tranquil streamers of cloud. Space around it was speckled with diamond-dust glimmers as sunlight bounced off the orbital forts that guarded this precious world against invasion.

The insertion ship flew in south of the ecliptic, shedding cold mass in irregular bursts like a black comet. By the time it was on its final approach to the unsuspecting planet, it was down to twenty-five meters in diameter. It had no magnetic field and its outer shell was radiation-absorbent, rendering it invisible. Fully stealthed, it eluded the vigilance of the orbital forts to slip past them, discarding the last of its reaction mass in its final deceleration maneuver. Now it was basically falling toward the western edge of the largest continent, where a tall mountain range sank into the sea. Tiny course correction ejecta continued to refine the ship’s descent vector, steering it toward the coast, which was still thirty minutes from greeting the dawn. Inland, perched on undulating foothills, lights from the lonely city of Afrata shone brightly across the lush valley.

As it hit the upper atmosphere, the insertion ship peeled apart into six pear-shaped segments. They plunged downward, aerobraking with increasing severity as the atmosphere thickened around them. The segments were aimed close to a thin spit of land whose rocky coastline was covered in a tangle of vegetation.

A hundred meters from the shore, six large splash plumes shot up into the air like thick geysers, crowning and splattering down amidst the startled seabirds flying out to catch the first fish of the day.

The Neána swam ashore. Creatures out of every human’s dark ancestral nightmare, risen out of banishment to stalk the land once more—formidable reptilian bodies moving fast on multiple sinewy limbs, razor claws snapping continuously. They climbed the cliffs at the foot of the mountains and set off in search of their prey.

Dellian knew the Neána pack was closing on him. He was in Afrata’s downtown district, lurking in the shadows of a deserted plaza as the hot sun shone down vertically. The creepers that were colonizing the lower floors of the crystal and carbon skyscrapers trailed long strands like a verdant waterfall. It was good cover. He stole through the dangling vegetation, letting their silky leaves slither over his bare skin—a sensation akin to a shower of fine dust.

Somewhere along the avenue he was approaching, a flock of birds took flight, wings pumping hard to create a swirl of bright colors, blotting out the sky. He peered forward, seeing long shadows slink between the ferns that had conquered the pavements. A fast clattering was just audible above the dumb squawking of the fleeing birds: the gullet rattle Neána packs used to communicate when they were hunting.

Dellian spun around the corner of the building, raising his bow. The lead Neána was closer than he would have liked. When the diabolical thing saw him it started a kill run. Muscles as thick as his torso flexed along its hind limbs, pounding it forward, two sets of upper body limbs extended, claws snapping. Its victorious ululation was deafening. Dellian stood still for a second, keeping the bow stable. He let the iron-tipped arrow fly. It split the air like a black laser beam and pierced the Neána’s gullet.

The monster lurched to the ground, bile-colored blood pumping from the wound, momentum tumbling it forward. The others screamed their fury and charged him, but Dellian was already gone, racing for the other side of the avenue and the tangle of creepers skirting the skyscraper. Dappled darkness closed around him, and the rough leaves clung to his bulky bulletproof vest, slowing his flight. His boots crunched the fronds beneath his feet as he headed for cover behind the skyscraper’s entrance portico. Behind him, the Neána were calling to one another, their stark twig-drum rattle reverberating across the plaza.

He reached the portico and crouched down. His breathing was heavy in his ears, heart pounding as he waited . . . but nothing attacked him. He eased his metal helmet up a fraction and snuck a quick glance around the wall. Two of the Neána were stalking along his side of the plaza, with three more scouring the buildings beyond the central fountain pond.

Dellian gripped his assault rifle tightly and slowly moved clear of the portico, dependent on just a few wispy vines to shield him from the aliens. He brought the muzzle up and opened fire in a blaze of flame and thunderous noise. Recoil hammered into his shoulder, but he kept his aim steady and watched the slugs tear a line through the first Neána’s flesh. The one behind it hesitated, as if cowed by the violence, then it pulled what looked like a bazooka out of its harness.

“F***ing Saints!” Dellian yelled. He sprinted forward, firing as he went, spraying bullets in the general direction of the second Neána. The creature fired its weapon, and the portico exploded behind him.

A blast wave slammed into him, sending him sprawling. The armor suit’s reactive carapace absorbed the brunt of the force while he curled up to roll through the impact. Adaptive musculature brought him back up to his feet fast, and sensor graphics swept across his optik, tracking enemy targets. The micro-missile launch pod snapped up out of his backpack, ready for acquisition data. Four Neána were powering into the plaza, wearing gray carbon exoskeletons with multiple weapon attachments. Electronic warfare systems went active, blitzing the plaza in a digital haze.

Dellian was about to fire his missiles when the sky overhead began to brighten. His sensor view flipped to vertical. High above, a brilliant golden fireball was punching down through the atmosphere, a rigid amber pillar of overheated air stretching out behind it. He took an instinctive step backward as the fireball seemed to accelerate. Its radiance flooded the plaza, turning his vision monochrome.

The fireball struck the fountain, and light detonated out, overwhelming everything.

Dellian blinked the glare away and stared through the high fence that guarded the perimeter of the Immerle estate. Twenty-five kilometers away, on the other side of the jungle-clad valley, Afrata shone like the sun, every building gleaming as if it contained a solar flare. He shrugged and jogged on toward the sports fields where his yeargroup should be waiting. They were due to play a soccer match against the Ansaru clan that afternoon. Personally, Dellian couldn’t wait another eight months until they all reached their tenth birthday, when Alexandre had promised them that they could start training in the orbital arena. He just loved the idea of them flying around in zero gee, somersaulting in slowmo, bouncing off walls to soar like a bird . . .

A lokak screeched out its hunting cry. Dellian stopped again, scanning the fence. That had sounded very close.

“There’s nothing there, you know.”

He spun around to see Yirella standing behind him. But this Yirella was fully grown, easily twice his height, and she didn’t have hair anymore. Even so, she was wearing a t-shirt and sports shorts, just like him. Yirella always did join the boys on the pitch to play their games, unlike Tilliana and Ellici. He gawped at her for a moment; somehow, this older Yirella was even more captivating than the one he knew . . . although he knew this one as well. I don’t understand.

“Then what was that sound?” he asked, smug that he’d outsmarted her of all people.

“A memory.” She went down on her knees, putting her big head level with his, and held both hands toward him. “Do you trust me, Del?”

Outside the fence, a whole chorus of lokak screeches began, rising in pitch and ferocity. He knew that meant they were gathering, ready to assault the estate at the bidding of the Neána. Always the Neána, the eternal enemy, tricksters and betrayers.

“Yes,” Dellian said nervously, trying to look at her and not out at the tangled jungle beyond the fence.

“Good.” She took his hands. Her fingers were cool and dry and immensely strong. Yirella’s presence always made him content, but this time the physical touch was profound. It wasn’t just his skin that was feeling her; the sensation of touch was sinking deep into his flesh, cooling and relaxing his muscles. He hadn’t realized he was so tense.

“This is important, Del. None of this, what you’re seeing—the estate, Juloss—none of it is real.”

“What?” He turned his head a fraction.

Her eyes were wide with love and concern. The emotion was so strong that it was all he could do just to stop his eyes from watering. “I don’t understand,” he said miserably.

“There is one thing I know you do understand: I am here, Del. I am with you. And I will never leave you. Not ever, because I love you.”

The world behind her was vibrating, as if he were shaking his head frantically. But he wasn’t; no way could he shift his gaze from her beautiful eyes.