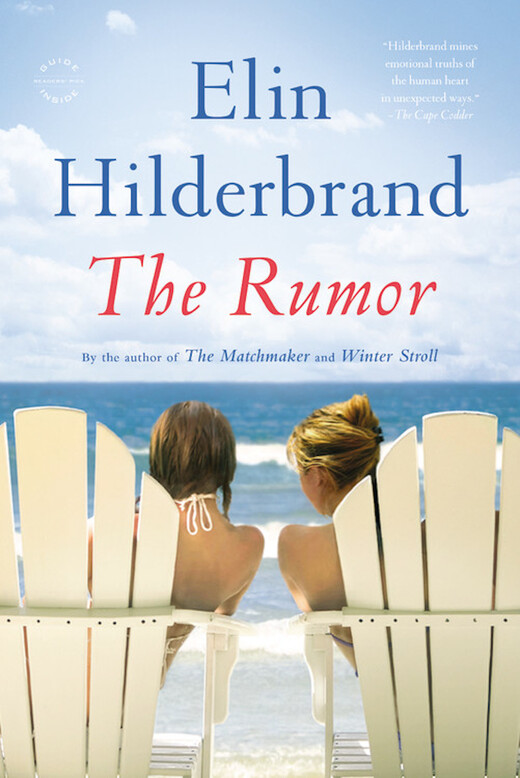 A friendship is tested in this irresistible page-turner from New York Times bestselling author Elin Hilderbrand. Nantucket writer Madeline King could not have picked a worse time to have writer's block. Her deadline is looming, her bills are piling up, and inspiration is in short supply. Madeline's best friend Grace, is hard at work transforming her garden into the envy of the island with the help of a ruggedly handsome landscape architect. Before she realizes it, Grace is on the verge of a decision that will irrevocably change her life. Could Grace's crisis be Madeline's salvation? As the gossip escalates, and the summer's explosive events come to a head, Grace and Madeline try desperately to set the record straight--but the truth might be even worse than rumor has it.

The first two calls were from Marlo, Angie’s assistant, but the third call was from Angie herself, and Madeline let it go straight to voice mail.

She knew what Angie was going to say because Marlo had been quite effective at hammering home the point: they needed catalog copy for the new novel by Friday, or Monday at the very latest. Theirs was a business of deadlines.

As Madeline listened to Angie’s message, she held the phone several inches from her ear, as if the distance would soften the blow.

Madeline was at her kitchen counter, with her blank legal pad sitting in front of her. Her previous novel, Islandia, had come to her like cold syrup out of a glass bottle. The progress was slow—line by line, paragraph by paragraph—but the path it would take had always been clear to her. Islandia had been a dystopian tale of Nantucket four hundred years in the future; the island was being consumed by the Atlantic Ocean, thanks to global warming. Everyone was doomed except for Madeline’s teenage protagonists, second cousins Jack and Diane (so named after Madeline’s favorite song growing up), who survived in a dinghy until the novel’s end.

Madeline credited inspiration for this novel to the seven months she had spent nursing her father-in-law, Big T, before he died. His prostate cancer had metastasized to his brain and then his liver, and though this had crushed Madeline’s spirit, it had been beneficial to her imagination. Her prevailing thoughts were ones of illness, the decay of the body, the decay of mankind. She had then read a fascinating article about global warming in The New Yorker (which she had started subscribing to at age nineteen, in order to better herself). The article said that if humankind didn’t change its pattern of consumption, islands like Nantucket and Martha’s Vineyard, and barrier islands like the Outer Banks, would be subsumed in less than four centuries.

Islandia was a departure from the autobiographical nature of her previous two novels, The Easy Coast and Hotel Springford. It had been warmly welcomed by her publishing house and deemed a “bigger” book. Madeline’s agent, Redd Dreyfus, had negotiated a brilliant deal, a low-six-figure advance for two books. This was such an exciting and unexpected development that it had nearly set Madeline’s curly blond hair on fire.

Now, however, most of the advance was gone in an investment with Eddie, and Madeline was on the hook to deliver at least an idea for a second novel. She was supposed to come up with a hundred-word description for the catalog that would go to the sales reps.

But Madeline didn’t even have that much.

She was disrupted from her anxiety by the rumble of the UPS truck and the thump of a package on the front porch. She hurried out, hoping to find a box containing an idea for a brilliant new novel, but she was treated instead to the school portraits of her son, Brick.

Madeline sat down on the front step of the porch, even though it was freezing and she didn’t have a coat on. She was mesmerized by how the portrait contained both the little boy Brick used to be—with his thick blond hair and the deep dimple in his right cheek—and the man he was rapidly becoming. He would look like Trevor and Big T, but with Madeline’s blue eyes and her smile (which showed a little too much gum, she’d always self-critically believed). She carried the portraits inside and pulled all of Brick’s school photos from the secretary, lining them up on the rug, from kindergarten through high school.

Good-looking kid, she thought. She had desperately wanted another child, but after three miscarriages, she gave up.

She wondered if Grace had gotten the twins’ portraits and if she was going through this exact same ritual at her house on Wauwinet Road. Madeline grabbed her phone, thinking only briefly of the awful, soul-shrinking message from Angie, and she called Grace.

Should she call Grace’s cell? Grace never answered; she checked her texts every two or three weeks. Madeline would have better luck mailing Grace a letter.

She hung up without leaving a message and then collected the pictures of Brick. It was official: she could get nothing done in this house. The dishwasher called to her: Empty me! The laundry in the dryer called to her: Fold me! The countertops said: Wipe me down! There was always something—the house phone rang, the garbagemen came, there was dinner to plan, shop for, prepare—every single night! Brick needed to be dropped off or picked up; the car had to be inspected, the recycling sorted, the checkbook balanced, the bills paid. Other mothers commented on how nice it must be that Madeline was able to “work from home.” But working from home was a constant battle between the work and the home.

Friday. Monday at the very latest.

The mudroom door opened and shut, and Madeline heard whistling, something from Mary Poppins. Was it that late already? Madeline’s husband, Trevor, strolled in, wearing his very cute pilot’s hat. “Chim-chiminey, chim-chiminey, chim-chim-cheroo!” Trevor fancied himself the second coming of Dick Van Dyke.

“Hey,” he said. He gathered Madeline up in his arms, and she rested her face against the front of his shirt and airline-issued polyester t. . .