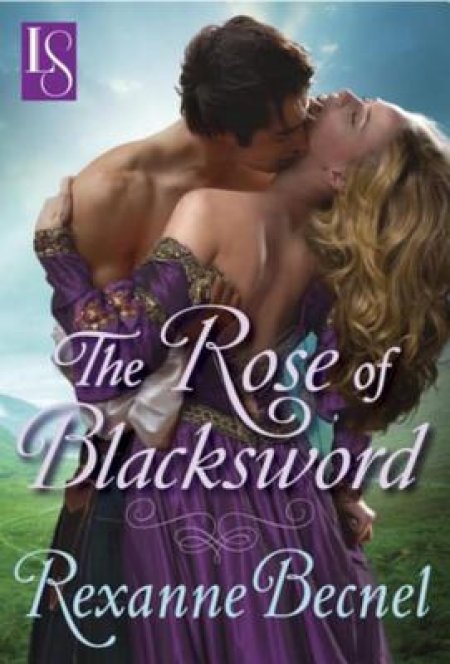 From bestselling author Rexanne Becnel, this classic romance is the beguiling tale of two souls cast together by fate. Like all her historical novels, The Rose of Blacksword speaks to a love that resonates throughout the ages.

Lady Rosalynde of Stanwood has the power to entice men to deeds of reckless daring. And none is so rash and bold as the condemned outlaw known as Blacksword. In return for safe escort to her ancestral castle, Rosalynde is forced to marry the rogue, never dreaming that holy wedlock will fan the flames of unholy desire.

Wielder of the coveted Blacksword, with the fate of his noble name resting on his massive shoulders, Sir Aric of Wycliffe lives to bring death to his treacherous nemesis—until his heart is bested by the enchanting maiden who saved him from the hangman’s noose. Bound together by ancient custom, the brazen knight demands nothing less than Rose’s total surrender. But even as revenge and honor war within him, he is undone by the most seductive conqueror of all: wild, irresistible love.

Includes a special message from the editor, as well as excerpts from these Loveswept titles: Tender, Loving Cure, Spellbound, and This Fierce Splendor.

When the breeze is right and the flowers are in full bloom, the fragrance of roses permeates even the far reaches of the battlements at Stanwood Castle. The enduring stone, hard and unyielding, seems an unlikely setting for the romantic mood created by the gently wafting scents. Yet it is those very incongruities that contribute to the idyllic setting, for the forbidding protection of those ancient stone walls provides the environment that coaxes such exquisite blooms from the extensive rose gardens.

The castle is a popular stop for tourists and is well-known for its gardens, which are said to have been tended without break since the time of King Henry II. A formal herb garden laid out by an early chatelaine still provides milfoil and vervain, lungwort and sallow root. A small stand of beautifully espaliered pear trees are said to be descended from an original planting from the time of King Stephen.

But the castle’s true claim to fame is its roses. No modern hybrids, these—grown for their long, spindly stems in regular rows for ease of cutting. Stanwood’s roses bloom in riotous abandon, climbing up walls, clambering along eaves, sprawling over the outside stairways. They spring up in crevices and flourish in the most outlandish places. Even in the dead of winter there is bound to be some tenacious Rosa bravely putting forth blooms along a protected south-facing wall.

But one area above all others within Stanwood’s mellow walls seems to beckon to the observant visitor. In a level spot at one end of the bailey, a thick hedge of Rosa Gallica surrounds an inviting green lawn. A solitary walnut tree shades a pair of carved stone benches at one end, while an ancient cast-bronze sundial stands at the other, supported on a simple fluted column and surrounded by a thick carpet of creeping thyme.

The years have given the bronze a deep patina, burned in by the sun and washed clean by centuries of English drizzle. But the letters on the sundial gleam as brightly as if they were newly cast. They are worn down, of course, and in some places barely distinguishable due to the many hands that have rubbed the message engraved there. A tale, so old that no one knows its source, promises long and happy life to those newlyweds who trace the sundial’s aged words.

A rose made sweeter by the thorn,
A sword forged mighty by the fire.
A love kept sacred by a vow.
It’s a legend many have come to believe in.

England, A.D. 1156
The spindly rosebush was more thorns than foliage. Devoid of even a bud, it looked forlorn against the barren soil. It might have been only a dead stalk, not worthy of all the care being lavished upon it. But to Lady Rosalynde the meager bush was everything in the world she had left to give her little brother.

Her face was pale and sober as she knelt on the ground. She was unmindful of the dirt that stained the light blue of her celestine overtunic. She only concentrated on digging a suitable hole in the rich black earth, then added a generous portion of well-rotted stable sweepings to it. She wiped at her face with the back of one hand, leaving a black smudge upon her tear-streaked cheek, but she did not pause at her work. A sob escaped her, and then another as she centered the shrub. By the time she scraped the mound of soil back into the hole, she was weeping openly. But that did not deter her in her task. With hands now grimy and nails ruined quite beyond repair, she packed the soil firmly around the roots. It was only then that she sat back against her heels and stared pensively at the lonely little grave before her, marked now by the thorny rosebush and a new stone marker.

Beyond her, standing bareheaded and awkwardly gripping his Phrygian cap, the young page, Cleve, watched his mistress. He was hesitant as he approached her with the wooden bucket of water he had drawn from the garden well.

“Shall I water it now, milady?” he asked in a hushed tone.

Rosalynde looked up at him. Despite her own all-consuming grief, she recognized that he too was sorely distressed by young Giles’s passing. But he blinked hard against any threat of tears, and she gave him a sad and rueful smile. “I’d like to do it myself.”

He gave her the bucket without argument, but Rosalynde could not mistake the concerned expression on his normally matter-of-fact face. She knew everyone thought she was behaving most strangely and that they were all humoring her only because they did not know what else to do. Death always seemed to make people uncomfortable, as did dealing with the surviving family. When she had told Lady Gwynne that she wanted to plant a rosebush at Giles’s grave, her poor aunt’s eyes had filled anew with tears. But she had only wiped her eyes, compressed her lips tightly, and nodded. When Rosalynde had told Cleve that she would plant the rose herself—she wanted no one to do it but herself—he too had accepted her wishes and silently acquiesced. But now as she carefully poured water around the spindly plant’s roots, she felt as if this gesture of hers toward her only brother had all been for naught. The rosebush changed nothing. The fact that she had labored so hard at it would not undo what had happened.

She drew the empty bucket against her chest and gripped it tightly to her. Giles was still dead, still lost to the fever that had racked his frail body for three torturous days. Giles was dead despite all her frantic efforts to save him, and she had never felt more alone. First her mother. Then, for all practical purposes, her father. And now Giles. Despite her aunt and uncle who had been so good to her, she could not help but feel utterly abandoned.

Cleve shifted uneasily and once more his cap made the slow twisted circuit through his hands. Aware of his discomfort, Rosalynde took a slow, steadying breath.

“ ’Twill bloom in his place,” she said softly, as much for her own comfort as Cleve’s. “I know it looks quite meager now, but by summer’s end …” One last sob caught in her throat and she forced herself to look away from the lonely little grave.

“Please, milady, come along now. Let me see you back to Lady Gwynne and Lord Ogden. Your aunt was most concerned that you should rest.…” He took a hesitant step toward her small, bowed figure. “You’re finished here now. Come away.…”

He trailed off as she turned a pale and haunted face up to him. Her eyes became even more brilliant than usual, their pale gold and green centers glistening with her tears.

“I am finished here,” she agreed in a soft, wistful tone. She rubbed absently at the dirt clinging to her hands as the thought that had been lurking in her mind these past two days now became clearer. “I no longer need tend my little brother. There’s truly no reason for me to stay here at Millwort Castle any longer, is there?” She sighed and looked down at her hands, unaccountably frightened by what she realized she must do. “Giles is beyond all help now. It’s time that I went home.”

“Home?” Cleve ventured nearer the mourning girl. “But, milady, this is your home. You needn’t leave here. Why, my Lady Gwynne would be quite distraught to lose you. And anyway, until your father hears of Master Giles’s death—” He hesitated and then made a quick sign of the cross. “Until he is told and decides what to do, then you mustn’t think of leaving here atall. No, not atall,” he stated quite firmly.

Rosalynde pushed a thick tendril of her dark mahogany hair back from her cheek. “And who’s to tell the Lord of Stanwood about the loss of his son if not I? If not the very one he entrusted his only male heir to?” She turned her face back to the little mound of earth that was her brother’s grave and to the scrawny rosebush that marked its presence. She remembered well her father’s parting words to her despite her tender age so long ago. He’d said it that first time he had left her off at Millwort with her infant brother. And he’d said it each of the few times he had visited them these long eight years since. “Take good care of your brother,” he had told her. “Take good care of your brother.

New tears started and fell unabashedly down her pale cheeks, and she was hard-pressed to know whether they were caused by sorrow or an inexplicable dread of seeing her father. Yet she knew she could not avoid him. Her eyes grew wide as she stared bleakly at her brother’s grave. “I am the one who must do it. I must tell my father that his heir is dead.