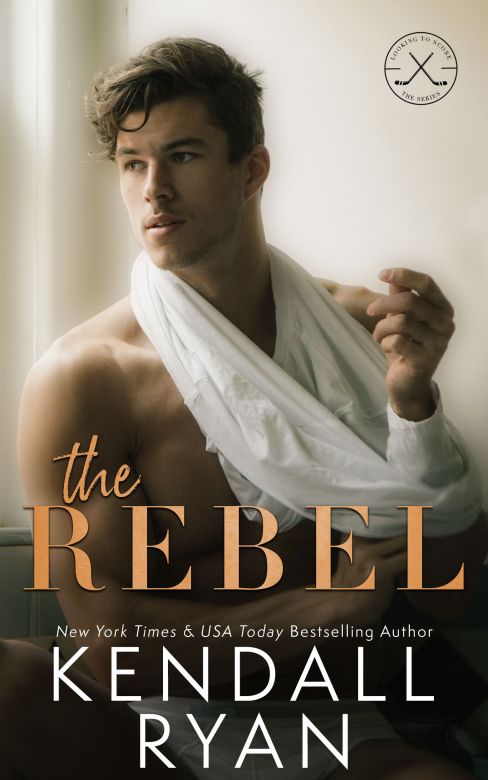 We shared one hot night together back in college before our paths took us in different directions.But now, the most brilliant and beautiful woman I’ve ever met is back in my life. And the chemistry I remember? It’s more combustible than ever.Except…our fling is forbidden and must exist only in secret. Her rules, not mine.I can’t be her forever. I’m not that guy, and even she knows it.But I can’t stay away from her either. I’m determined to claim not just her body but her heart, even if that’s the one thing she’s vowed not to give me.A sweet and bananas-sexy hockey romance you do not want to miss! Grab this sizzling standalone today from New York Times bestselling author, Kendall Ryan and you’ll automatically get a FREE bonus scene in his point of view that you won’t want to miss!

When I reach the floor to her office, Eden’s assistant is seated at a glass desk just outside her office. Her name plate says Aspen Ford.

She looks up at me and pulls a pencil from her mouth. Then blinks at me twice. “Holt, right?”

Her mouth curls in a slow smile, and I wonder what Eden’s told her about me. About us. Probably nothing, I correct myself. Because there is no us.

“Great. Eden and Les are inside. They’re expecting you. Go on in.”

I nod once and then let myself inside Eden’s office, pushing open the heavy frosted glass door. They’re already seated at the conference table and Eden’s gaze lifts to mine the second she spots me in her peripheral.

Today Eden’s dressed in a pair of black pants, glittery ballet flats and a pale pink blouse. It’s decidedly feminine and I love that she’s confident enough to be herself. She doesn’t try to shape herself to the standards of what others might say is needed for the leader of a sports franchise.

I shake my head. “Not a coffee guy. Thanks, though.”

A delicate gold necklace rests between her breasts and I draw an inhale, forcing my eyes up.

“I’m good, but thanks for the offer.”

“I couldn’t live without my morning Joe,” Les adds.

Geez, for a second, I’d forgotten he was even there.

It’s easy to get wrapped up in Eden. She’s striking and poised and so fucking tempting…

I take a seat in the same chair as last time so I have a view of both Eden as well as the door to her office.

“So should we get down to business?” Eden asks, taping her pen on the table beside a black leather planner engraved with her initials

It occurs to me that I don’t know her middle name.

“The travel schedule is the first thing we should discuss,” Les says, looking between Eden and I with a frown.

If he’s worried I’m going to blow off traveling with the team, he’s wrong. I take my role seriously and even if that means flying to Saskatoon in the middle of January, I’ll be there. I mean, I’d need to buy a new parka, but I’d be there.

“Whatever you need.” I dig my smartphone from my pocket and pull up my calendar.

Eden smiles. “There’s a home game this Thursday and then we leave Friday midday for a game on Saturday in Detroit and stick around the Midwest for a game in Ohio on Monday. We’re back late Monday night. Probably not until midnight or so.”

I jot the dates and locations down in my calendar and nod to Eden. “Sounds fine. No issues here.”

“I hope you don’t have any pets.” Eden’s watching me from over the rim of her coffee mug.

Just like her outfit, her mug is unapologetic sporting the phrase: Let’s Keep the Dumbfuckery To a Minimum Today—written in fancy cursive writing. I have to squint to make out the words, and when I do, my mouth lifts.

Her eyes lift to mine. “Not even a goldfish.”

For just a second, I’m speechless—transported back in time.

It was something we talked about that night we spent together—she admitted that growing up as an only child, she was often lonely, said she’d always wanted a pet, but her parents never allowed it. I stupidly suggested she get a goldfish. She teased me, saying fish were a big commitment and she didn’t know if she had the time.

“Haven’t made the commitment yet. You?” I manage, voice raspy.

With a laugh, she shakes her head.

Her eyes linger on mine for a minute longer. “Still, I know it’s a lot to drop everything and travel. So thank you.”

As Eden presses on with the fall’s remaining trips and events, Les’ cellphone begins vibrating against the table.

“Excuse me for just a minute,” he says, standing and frowning down at the thing.

“Take your time,” Eden says, enjoying another sip of her coffee as Les exits her office, closing the door behind him.

Now that we’re alone, she turns her attention back to me. “Why aren’t you dating anyone?”

The girl I once knew wasn’t always so bold around me. I remember her as being sort of shy that night. Ducking her chin when I asked her a question, fidgeting and tucking her hair behind her ear. Ready to flee from my bed at any moment. That’s the way I remember her. But then something shifted. She let her walls down and got comfortable. She opened up to me. We laid together and she rested her head on my chest. I liked that part. Never been much of a cuddling type of guy, but I enjoyed it that night with Eden.

I realize she’s still waiting for me to answer her question. The one about why I’m still single.

“No time I guess. I probably work too much.”

She shifts, still watching me from across the table. “I see. That makes sense though, you’ve grown your company, your reputation. It’s impressive what you’ve done.”

I nod once, but dodge the compliment. “What about you? Has there been anyone since Braun?”

The second the words leave my mouth, I regret them. It’s none of my damn business, but Eden doesn’t seem offended or bothered by my question.

“No,” she says softly. “Before he got sick, my grandfather tried to introduce me to his golfing partner’s godson.”

“Did you meet with him?”

“Why not?” I’m curious and since she’s entertaining my questions without so much as a pause, I’m rolling with it.

“There was no chemistry. At all,” she says sternly. “He was about as exciting as a baked potato.”

An easy chuckle tumbles from my lips. “Gotcha. So, we’re both single.”

A smile lifts her full mouth. “It would appear so.”

Les comes back in, pocketing his phone. “How’s it coming along, kids?”