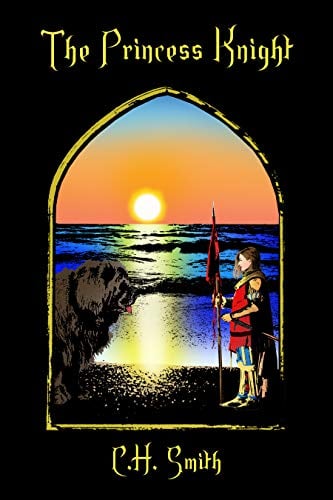 C. H. Smith
Follow
Some stories have power. Power in friendship and adventure. Power in fantasy and faith. This is such a story.
Genres: Young adultChristian Fantasy
Buy now
Available in:
Keywords: faithfairy talecancer sucks
Share

I knew the sad man at the bar had a story he needed to tell. At the time, I didn't realize that I needed to hear it just as much.
As he began, Daniel weaved a tale of a princess's quest to counter a sorcerer's vile curse. She traveled across the whole kingdom with her talking canine companion, making new friends and battling fearsome enemies the whole way. The stakes were high in the magical story he told, and it didn't take long to realize, the stakes were higher in the real world his tale mirrored.
Hearing the story would change me forever...

I am not exactly sure what answer I was expecting from the quiet, bearded guy a few stools down from me at the bar, but I was definitely not prepared for the one he provided. I had half-expected him to brush me off or offer some noncommittal response. If he was more liquored-up than I had thought, I might have got a rant about an ex-wife or cheating girlfriend. If he was piss drunk, I would have expected pitiful whining about missed opportunities and regret. His answer did not match any of those.

“How’s it going, big fella?” I asked out of boredom.

He looked at me with the wide eyes of a child just caught sneaking into his dad’s locked office to peek at something he knew was off limits.

“My princess is gone, and I miss her.” Then after a long pause, he continued, “Sometimes, lately, I struggle to remember her face perfectly. And the joy of her laugh, I remember, but not the tone or sound, just the feeling it caused. That’s not always enough.”

I am a fairly well-read guy for a bar rat and have never met a stranger. In that moment, however, I was at a loss for words. So, I did the only logical thing possible.

“Brandee? Another round for me and my friend,” I said, buying some time to collect my thoughts. There is an unspoken rule between most bar patrons. Conversations must pause in front of the bartender, unless said bartender was previously involved, or her opinion would add value in the conversation. The bearded man that had been nursing his beer did not honor the sacred tradition.

“I don’t even know why I’m here. I don’t drink much anymore, but I couldn’t think of anywhere else to be,” he said, draining his warm beer and accepting a new one from Brandee.

The man just nodded and sipped his beer. I thought that was the end of it, so I asked Brandee about her studies.

“Pretty good, Jake,” she said as she perched on the bar in front of a large, open history book. “But I do have an exam tomorrow morning, so if I’m a little slow on the pour, just holler.”

Boredom got the best of me. I slid over a couple seats next to the bearded man.

“What’d you say your name was?”

“I’m Jake. Don’t think I’ve ever seen you in here before,” I continued, trying to get the conversational ball rolling.

“Don’t be in a hurry, friend. The old couple at the end there are boring, and I’m too old to hang with the college crowd. But me and you, that’s just about right,” I said.

This guy had something to get off his chest, I could tell. Daniel paused and looked around the bar. Then he sighed and settled back onto his stool.

“There, that’s better. Now, what you do for a living, Daniel?”

“That’s hard. Raising other people’s kids, I mean,” I told him. “I’m a car salesman, and sales have been good. Let me buy you another beer.”

“Maybe after this one is done,” Daniel said quietly. “Not sure I’ll be up for another one.”

“Sure you will be,” I said with a smile and took a sip. “What subject did you teach?”

Daniel did not respond right away; instead, he stared at the watch on his wrist. “Subject? High school history.”

“One of my favorites! At least better than English lit. Having to read a bunch of stories that didn’t make a hoot of sense, written by a bunch of dead folks, never appealed to me,” I said honestly, shrugging my shoulders.

“Stories are powerful, though. At least the good ones are, anyway,” he said, a vacant look still in his eyes.

I realized I was getting back into strange territory, but now I had to know what haunted him. What made him talk about princesses and powerful stories?

“Do you know any stories like that? Stories with power?” I asked. Daniel nodded, so I pushed on. “We have time. Tell me one.”

“I’m not sure about that. The last story I told didn’t end well for anybody,” he replied.

“Was it about the princess you spoke of earlier?” I asked. My fingers tightened on my glass as I watched for a reaction.

The large, bearded man lifted his head to look me in the eyes. “It was a story I told my daughter, Josie, and yes, it was about the princess I mentioned.” I noticed his eyes showed a yearning for something, but I was not sure if it was to tell the story or to forget it.

“It’s not a story I’ve ever told anyone but her,” he said quietly. “And I don’t think this is the place or the time.”

I watched the enormous struggle happen within him. Daniel’s fist clenched tightly, and small beads of sweat appeared on his forehead. The yearning intensified till it burned through him. He needed to tell the story again. He needed it to be heard.

“There is never the perfect time or place for anything,” I said, leaning in closer. “There is only now, on that barstool, in this bar. Tell your story. It’ll be better than the ending of this massacre of a football game on the TV.”

Daniel’s shoulders relaxed as he polished off his beer. The intense look in his eyes was replaced with the far-away gaze of a man lost in a memory. A memory replayed so often it was comfortable and inviting between the painful edges.

“Alright, but first, I’ll take you up on that next beer,” he said.

A long time ago in a land far, far away – or, if you prefer, Once upon a time – there was a kingdom known as Crystal Forge.  It was a large kingdom, filled with beautiful and wondrous things. Unimaginably tall waterfalls filled crystal-clear pools that fed tranquil streams. Soaring trees in lush green forests were home to abundant wildlife. The cities were regal and pristine, and encircled by fertile farmland. To the south, the coast was lined with pink, sandy beaches and blue water. To the north and east, the Dragon Spine Mountains offered protection and unspoiled beauty. Finally, to the west was the Endless Sea of Grass, known as much for its fertile soil as its vastness.

Crystal Forge was a truly beautiful place. It was also quite magical. It was home to the Elves of the Golden Age. The only known colony of water sprites inhabited the two major rivers. Sirens swam in the bay to the south, and dragons soared over the mountains. Even commonplace animals such as deer or squirrels had a touch of magic. Some lived much longer than would be considered natural, others seemed to possess higher levels of intelligence. Though they were rarer, some of the animals could talk! Crystal Forge was both wondrous and mystical. Light causes shadow, as they say, and there was darkness in the Forge as well. This is a tale of one child’s quest to fight against that darkness. To fight it at all costs.

There were many castles in the Forge, but only the three oldest are worth mentioning. The blood-red castle at the base of the Dragon Spine Mountains was said to have been built by the dragon riders of lore. The white sandstone castle on the edge of the grass sea was low and sprawling, and was almost as old as the Red Dragon Castle. Then there was Seascape Castle on the southern coast. It was the newest of the major castles, although no one could remember anyone who would have seen the castle when it was built.. Seascape Castle, which was made entirely of coral rock, was home to the Queen, the Princess and one big brown Shaggy Dog.

Princess Sophie loved to walk the sandy pink beach just below the castle in search of perfect seashells. The perfect shell did not have to be really big, nor did it have to be extremely small. It did not have to be pure white or wildly colored. It did not have to be round or oblong. It could be any of these things or none of them. It just needed to be perfect. The Princess could think of no better way to spend her birthday morning. She loved being on the beach or in the Queen’s forest or even the drill yard, as long as she was outside. She felt free and alive, or perhaps merely unencumbered by layers of cloth and frilly lace daily life in the castle required. With her dark hair blowing across her face, she gazed over the sea longingly before turning back to the castle. It was time for her birthday celebration complete with cake and ice cream, but also with dresses and ceremony and oh so many people.

On her way across the short dunes but before the climb up the bluff, the Princess was joined by a big, fluffy brown dog. The dog, which closely resembled a small bear, had long, unruly hair, each strand of which seemed to want to lay in any direction but that of the hair around it. He had a sort of bumbling energy that some might confuse with clumsiness or dimness. Shaggy Dog was far from either of these things, though. In fact, he was one of the animals in the Forge that could talk, although he did so rarely and even then usually only to the Princess.