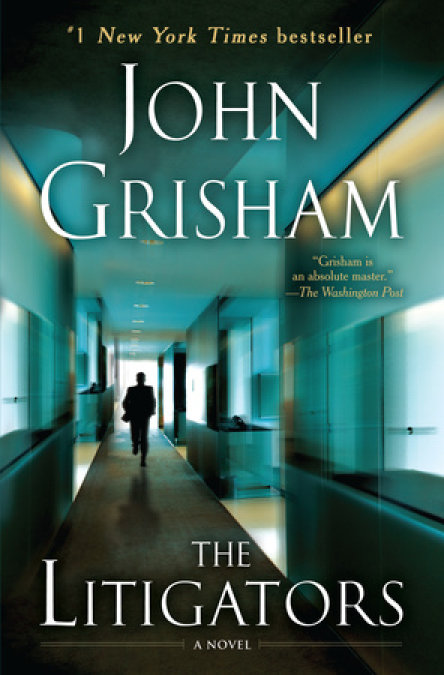 After leaving a fast-track legal career and going on a serious bender, David Zinc is sober, unemployed, and desperate enough to take a job at Finley & Figg, a self-described “boutique law firm” that is anything but. Oscar Finley and Wally Figg are in fact just two ambulance chasers who bicker like an old married couple. But now the firm is ready to tackle a case that could make the partners rich—without requiring them to actually practice much law. A class action suit has been brought against Varrick Labs, a pharmaceutical giant with annual sales of $25 billion, alleging that Krayoxx, its most popular drug, causes heart attacks. Wally smells money. All Finley & Figg has to do is find a handful of Krayoxx users to join the suit. It almost seems too good to be true . . . and it is. 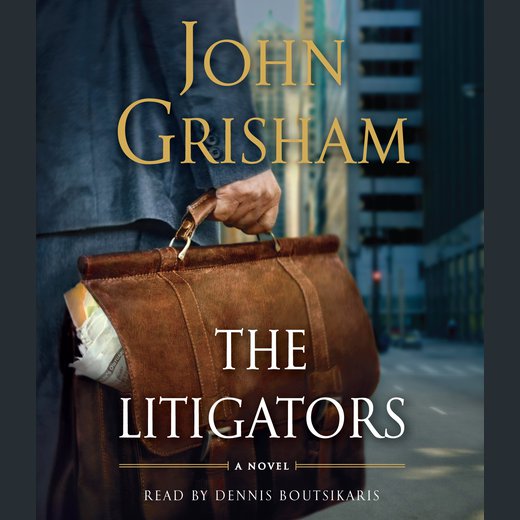 The law ﬁrm of Finley & Figg referred to itself as a “boutique ﬁrm.” This misnomer was inserted as often as possible into routine conver­sations, and it even appeared in print in some of the various schemes hatched by the partners to solicit business. When used properly, it implied that Finley & Figg was something above your average two-bit operation. Boutique, as in small, gifted, and expert in one specialized area. Boutique, as in pretty cool and chic, right down to the French-­ness of the word itself. Boutique, as in thoroughly happy to be small, selective, and prosperous.

Except for its size, it was none of these things. Finley & Figg’s scam was hustling injury cases, a daily grind that required little skill or creativity and would never be considered cool or sexy. Proﬁts were as elusive as status. The ﬁrm was small because it couldn’t afford to grow. It was selective only because no one wanted to work there, including the two men who owned it. Even its location suggested a monotonous life out in the bush leagues. With a Vietnamese massage parlor to its left and a lawn mower repair shop to its right, it was clear at a casual glance that Finley & Figg was not prospering. There was another boutique ﬁrm directly across the street—hated rivals—and more lawyers around the corner. In fact, the neighborhood was teeming with lawyers, some working alone, others in small ﬁrms, others still in versions of their own little boutiques.

F&F’s address was on Preston Avenue, a busy street ﬁlled with old bungalows now converted and used for all manner of commercial activity. There was retail (liquor, cleaners, massages) and professional (legal, dental, lawn mower repair) and culinary (enchiladas, baklava, and pizza to go). Oscar Finley had won the building in a lawsuit twenty years earlier. What the address lacked in prestige it sort of made up for in location. Two doors away was the intersection of Preston, Beech, and Thirty- eighth, a chaotic convergence of asphalt and trafﬁc that guaranteed at least one good car wreck a week, and often more. F&F’s annual overhead was covered by collisions that happened less than one hundred yards away. Other law ﬁrms, boutique and otherwise, were often prowling the area in hopes of ﬁnding an available, cheap bunga­low from which their hungry lawyers could hear the actual squeal of tires and crunching of metal.

With only two attorneys/partners, it was of course mandatory that one be declared the senior and the other the junior. The senior partner was Oscar Finley, age sixty-two, a thirty-year survivor of the bare- knuckle brand of law found on the tough streets of southwest Chicago. Oscar had once been a beat cop but got himself terminated for crack­ing skulls. He almost went to jail but instead had an awakening and went to college, then law school. When no ﬁrms would hire him, he hung out his own little shingle and started suing anyone who came near. Thirty-two years later, he found it hard to believe that for thirty- two years he’d wasted his career suing for past-due accounts receivable, fender benders, slip-and-falls, and quickie divorces. He was still mar­ried to his ﬁrst wife, a terrifying woman he wanted to sue every day for his own divorce. But he couldn’t afford it. After thirty-two years of lawyering, Oscar Finley couldn’t afford much of anything.

His junior partner—and Oscar was prone to say things like, “I’ll get my junior partner to handle it,” when trying to impress judges and other lawyers and especially prospective clients—was Wally Figg, age forty-ﬁve. Wally fancied himself a hardball litigator, and his blustery ads promised all kinds of aggressive behavior. “We Fight for Your Rights!” and “Insurance Companies Fear Us!” and “We Mean Business!” Such ads could be seen on park benches, city transit buses, cabs, high school football programs, even telephone poles, though this violated several ordinances. The ads were not seen in two crucial markets—television and billboards. Wally and Oscar were still ﬁghting over these. Oscar refused to spend the money—both types were horribly expensive—and Wally was still scheming. His dream was to see his smiling face and slick head on television saying dreadful things about insurance compa­nies while promising huge settlements to injured folks wise enough to call his toll-free number.

But Oscar wouldn’t even pay for a billboard. Wally had one picked out. Six blocks from the ofﬁce, at the corner of Beech and Thirty- second, high above the swarming trafﬁc, on top of a four-story tene­ment house, there was the most perfect billboard in all of metropolitan Chicago. Currently hawking cheap lingerie (with a comely ad, Wally had to admit), the billboard had his name and face written all over it. But Oscar still refused.

Wally’s law degree came from the prestigious University of Chi­cago School of Law. Oscar picked his up at a now-defunct place that once offered courses at night. Both took the bar exam three times. Wally had four divorces under his belt; Oscar could only dream. Wally wanted the big case, the big score with millions of dollars in fees. Oscar wanted only two things—divorce and retirement.

How the two men came to be partners in a converted house on Preston Avenue was another story. How they survived without chok­ing each other was a daily mystery.

Their referee was Rochelle Gibson, a robust black woman with attitude and savvy earned on the streets from which she came. Ms. Gibson handled the front—the phone, the reception, the prospective clients arriving with hope and the disgruntled ones leaving in anger, the occasional typing (though her bosses had learned if they needed something typed, it was far simpler to do it themselves), the ﬁrm dog, and, most important, the constant bickering between Oscar and Wally.

Years earlier, Ms. Gibson had been injured in a car wreck that was not her fault. She then compounded her troubles by hiring the law ﬁrm of Finley & Figg, though not by choice. Twenty- four hours after the crash, bombed on Percocet and laden with splints and plaster casts, Ms. Gibson had awakened to the grinning, ﬂeshy face of Attorney Wallis Figg hovering over her hospital bed. He was wearing a set of aquamarine scrubs, had a stethoscope around his neck, and was doing a good job of impersonating a physician. Wally tricked her into signing a contract for legal representation, promised her the moon, sneaked out of the room as quietly as he’d sneaked in, then proceeded to butcher her case. She netted $40,000, which her husband drank and gambled away in a matter of weeks, which led to a divorce action ﬁled by Oscar Finley. He also handled her bankruptcy. Ms. Gibson was not impressed with either lawyer and threatened to sue both for malpractice. This got their attention—they had been hit with similar lawsuits—and they worked hard to placate her. As her troubles multiplied, she became a ﬁxture at the ofﬁce, and with time the three became comfortable with one another.

Finley & Figg was a tough place for secretaries. The pay was low, the clients were generally unpleasant, the other lawyers on the phone were rude, the hours were long, but the worst part was dealing with the two partners. Oscar and Wally had tried the mature route, but the older gals couldn’t handle the pressure. They had tried youth but got themselves sued for sexual harassment when Wally couldn’t keep his paws off a busty young thing. (They settled out of court for $50,000 and got their names in the newspaper.) Rochelle Gibson happened to be at the ofﬁce one morning when the then-current secretary quit and stormed out. With the phone ringing and partners yelling, Ms. Gibson moved over to the front desk and calmed things down. Then she made a pot of coffee. She was back the next day, and the next. Eight years later, she was still running the place.

Her two sons were in prison. Wally had been their lawyer, though in all fairness no one could have saved them. As teenagers, both boys kept Wally busy with their string of arrests on various drug charges. Their dealing got more involved, and Wally warned them repeatedly they were headed for prison, or death. He said the same to Ms. Gibson, who had little control over the boys and often prayed for prison. When their crack ring got busted, they were sent away for ten years. Wally got it reduced from twenty and received no gratitude from the boys. Ms. Gibson offered a tearful thanks. Through all their troubles, Wally never charged her a fee for his representation.

Over the years, there had been many tears in Ms. Gibson’s life, and they had often been shed in Wally’s ofﬁce with the door locked. He gave advice and tried to help when possible, but his greatest role was that of a listener.

Excerpted from The Litigators by John Grisham. Copyright © 2011 by Belfry Holdings, Inc.
Excerpted by permission of Doubleday, a division of Random House, Inc. All rights
reserved. No part of this excerpt may be reproduced or reprinted without permission in
writing from the publisher.