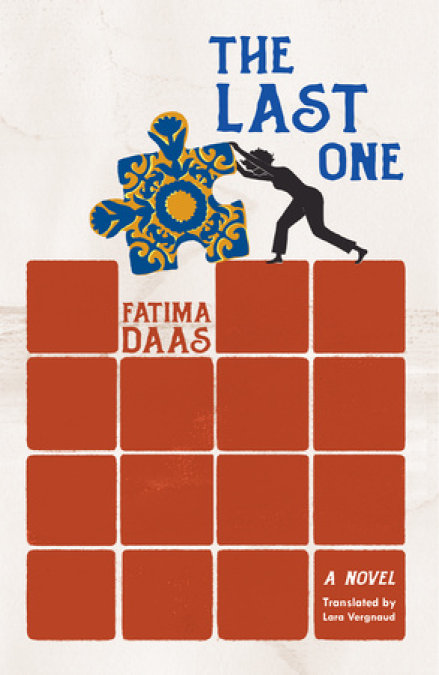 Drawn from the author’s experiences growing up in a Paris banlieue, a powerful, lyric debut that explores the diverse, often conflicting facets of her identity—French, Algerian, Muslim, lesbian.

The youngest daughter of Algerian immigrants, Fatima Daas is raised in a home where love and sexuality are considered taboo, and signs of affection avoided. Living in the majority-Muslim suburb of Clichy-sous-Bois, she often spends more than three hours a day on public transportation to and from the city, where she feels like a tourist observing Parisian manners. She goes from unstable student to maladjusted adult, doing four years of therapy—her longest relationship. But as she gains distance from her family and comes into her own, she grapples more directly with her attraction to women and how it fits with her religion, which she continues to practice. When Nina comes into her life, she doesn’t know exactly what she needs but feels that something crucial has been missing.

This extraordinary first novel, anchored and buoyed by the refrain “My name is Fatima,” is a vital portrait of a young woman finding herself in a modern world full of contradictions. Daas’s journey to living her sexuality in spite of expectations about who she should be offers a powerful perspective on the queer experience.

My name is Fatima.
The name of a symbolic figure in Islam. A name that must be honored.
A name that mustn’t be “soiled,” as we say in my house.
In my house, to soil means to dishonor. Wassekh, in Algerian Arabic.
Or darja, darija, our word for dialect.

Wassekh: soil, stir shit up, blacken.
It has multiple meanings, like “close.”

My mother would use the same word to tell me I had gotten my clothes dirty, the same word when she came home and found her Kingdom in bad shape.

Her Kingdom: the kitchen.
Where we had best stay out of her way.

My mother hated when things weren’t put back in their place.

There were rules in the kitchen, like everywhere else. We were expected to know and respect them.
If we couldn’t, we had to stay out of the Kingdom.

Among the phrases my mother said all the time, there was this one: Makènch li ghawèn, fi hadi dar, izzèdolèk.
It sounded like a punch line to me.
“Not a soul to help you in this house, yet it keeps piling on.”

Curling my toes in my knee-high socks, I usually retorted the same way:
“You need to tell me if you need help. I’m not psychic. I can’t just guess.”
To which my mother would snap back that she didn’t need “our” help. She deliberately used the collective pronoun in her reproach, so I wouldn’t take it personally, so I wouldn’t feel attacked.

I didn’t like hanging out in the kitchen, unless it was to eat.
I liked to eat, but not just anything.
My mother cooked for the whole family.
She designed the menu based on our whims.
I refused meat; I got fish. My father couldn’t go without it; there’d be plenty on his plate.
If Dounia, my older sister, wanted fries rather than a traditional meal, that’s what she would get.

For as far back as I can remember, I see my mother in the kitchen, hands chapped by the cold, cheeks hollow, drawing a ketchup stick figure over my pasta, decorating the dessert, preparing the tea, storing the pans in the oven.
I only have a single image left: our feet under the table, heads bent over our food.
My mother at the stove, the last to sit down.
Kamar Daas had a Kingdom, but I didn’t belong in it.


My name is Fatima Daas.
The name of a girl from Clichy who crosses the tracks to get to school.
I buy a copy of the Direct Matin at the Raincy-Villemomble station before I catch the 8:33 a.m. train. I lick my finger to efficiently turn the pages. The headline on page 31: How to Relax.
I find my horoscope beneath the weather forecast.
On the platform, I read my daily horoscope and then the one for the week.

If you want to be able to endure life, prepare for death. —Sigmund Freud

Your astral landscape: Don’t beat yourself up if you can’t help everyone who asks. Focus on yourself! Think before jumping into major projects. Don’t confuse your optimism for Herculean abilities.

WORK: It’s time to make some robust decisions. Your realistic approach will be your best asset today by far.

LOVE: If you’re in a relationship, be careful not to push away your partner with excessive demands. If you’re single, dream about Prince Charming all you want, but don’t expect to bump into him on the street corner.

Then I skim through the tragedies of the world as I try to ignore the urge to stare at people on the train.

Every single day there are commuters who refuse to move down the aisles. In the morning, I repeat the same not-magic words: “Would you mind moving forward, please? Other people need to get to work too.” At the end of the day, my tone changes.
I deliberately strip away the politeness.

The commuters who don’t move down the aisles are always the ones preparing to get off at the next two stations: Bondy and Noisy-le-Sec.
Their trick is to park themselves next to the doors so they don’t miss their stop.

In the bus, I watch to make sure the woman with a child, the pregnant woman, the elderly woman has a place to sit.
I focus my attention exclusively on the women.
I feel like I have to play the vigilante, to defend others, to speak on their behalf, to make them heard, to reassure them, to save them.

I didn’t save anyone. Not Nina, not my mother. Not even myself.
Nina was right.
It’s not healthy to want to save the world.


My name is Fatima Daas, but I was born in France, in the department of Yvelines, aka “the 78,” in Saint- Germain-en-Laye.
I came into the world by cesarean at the Clinique Saint-Germain on Rue de la Baronne-Gérard.
Cesarean, from the Latin caedere: “hew”; “cut.” Incision in the uterus.

After my birth, my mother has a heart attack, at thirty.
I blame myself for being born.
They take me out of her belly at dawn. I’m not born asthmatic. I become it.
I officially enter the category of allergic asthmatics at age two.
In adolescence, I hear the word “severe” used to describe my condition for the first time.
At seventeen, I understand that I have an invisible disease.
My longest hospital stay lasts six weeks.

My sister Dounia says that I’m a sponge, except the air’s not getting out.
It took me a while to realize that my asthmatic episodes can be triggered by emotions.
I have to follow a course of medical treatment, consistently, for life.


My name is Fatima.
Fatima is the youngest daughter of the last prophet Mohammed—Salla Allah alayhi wa salam, peace and salvation be upon him—and his first wife, Khadidja.

My name is Fatima.
God alone knows if I carry it well. Whether I’ve soiled it.

Like Fatima, I should have had three sisters.
One of mine passed away a few hours after her birth.
Her name was Soumya.

Fatima’s father deems her the noblest woman in heaven.
The prophet Mohammed—may God’s peace and blessings be upon him—said one day: “Fatima is a part of me. Any who harm her harm me.”
My father would never say such a thing. My father doesn’t say much to me anymore.


My name is Fatima.
I’m a little weaned she-camel.
I’m the mazoziya, the youngest daughter. The last one.
Before me, there were three girls.
My father had hoped I would be a boy.
During my childhood, he calls me wlidi, my little son.
Though he should call me benti, my daughter. He often says: “You’re not my daughter.”
I reassure myself by understanding that I’m his son.

My mother dresses me until I’m twelve years old.
She puts me in flower dresses, skater skirts, ballet flats. I have headbands in different colors, shaped like crowns.
Not every little girl wants to be a princess, Mama.
I hate everything that has to do with the female universe as my mother presents it to me, but I haven’t realized it yet.

Sometimes, my father takes me to school. He doesn’t check my homework.
He doesn’t ask me what I learned. He counts on my mother to do that.

My mother often says: “I did my wajeb.” Wajeb: role.
Her role as a mother.

A role: a function served by someone; an attribution assigned to an institution; a collection of norms and expectations that govern the behavior of an individual as a result of their social status or function within a group.
My father doesn’t mention his wajeb.

My mother would rather I wear sports bras than regular ones. She finds it less “rushed.”
She doesn’t want me to shave either.
Dounia tells her to let me shave my armpits at least, until I get older.
My mother repeats that I’ll have time for all that.

Before I became a teenager, my father would sing me songs.
He would tell me stories too.
Loundja! Loundja, the princess with golden hair.
My father always began his story with once upon a time.

Once upon a time there was Loundja.
A princess who was kept prisoner since she was a small child by el ghoula, the ogress, in the highest tower of her fortress, with no door or window. The ogress used Loundja’s long hair to climb up the tower.
One night, to no great surprise, a prince discovers Loundja.
He falls in love. He returns to save her. He marries her.
As in many other stories, Loundja and the prince have lots of children and live happily ever after.
What I liked the most was the time my father took to describe in detail Loundja’s long golden hair.

When he wasn’t telling me the story of Loundja, he would recount the life of the prophet Youssef—Alayi Salem, may salvation be upon him.
He always told the part about the prophet’s brothers. Eaten up by jealousy, they decided to throw Youssef down a deep well.
My father would whisper in my ear: Balak yiderolek kima Youssef. Careful your sisters don’t do the same to you!
I had trouble telling the difference between my father’s jokes and his warnings.

Early afternoons brought the nap ordeal.
I’d throw tantrums so nobody would force me to sleep.
Then, I figured out that I needed to be clever to get what I wanted.
I found the trick. No need for teary eyes, or even to expend any energy.
And it worked every time.
My father would bring me into the living room. We would lie down side by side in front of the television, my head on his shoulder. My hand on his head.
My father would fall asleep first. He took the nap I was meant to.
I’d join Dounia and Hanane playing in the garden. My mother was still in the kitchen.