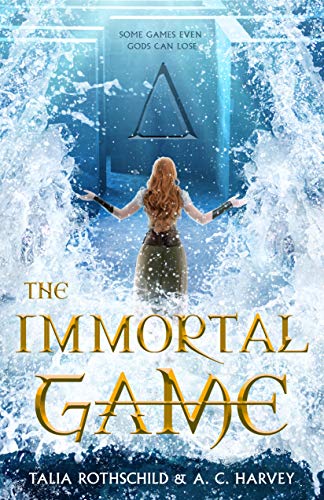 An exiled goddess goes on a quest to clear her name and save Mount Olympus in Talia Rothschild & A C Harvey's action-packed young adult debut, The Immortal Game!

Galene, daughter of Poseidon, desperately wants to earn her place among the gods. But when a violent attack leaves Mount Olympus in chaos and ruins, she is accused of the crime. Banished from Olympus, Galene sets out to prove her innocence and discovers a more deadly plot—one that threatens even the oldest of Immortals.

Fortunately, she has allies who willingly join her in exile:

A lifelong friend who commands the wind.
A defiant warrior with deadly skill.
A fire-wielder with a hero’s heart.
A mastermind who plays life like a game.

All-out war is knocking at the gates. Galene and her friends are the only ones who can tip the scales toward justice, but their choices could save Olympus from total annihilation, or be the doom of them all.

Galene trailed her fingers over the hilts of weapons lining the dark stone walls.

Today the fight for immortality was hers.

In the gleam of an ax-head, she caught sight of bright blue eyes watching her.

Galene turned to look at her best friend. Iyana wore a stunning set of soft blue robes, her long white-blonde hair-loose as always-adorned with a gilded silver comb. In contrast, Galene's wavy brown hair was already slipping free of her braid, and she was dressed in light armor, her scimitar and throwing daggers on the belt at her hip.

Iyana's face was drawn with tension. "Are your weapons sharpened?"

Her friend's expression tightened. "You're not immortal yet."

Galene let out a breath, trying not to think of the last death at an Immortality Trial. What her brother had done in response to that death, and what her life had become afterward. But the Olympians hadn't allowed anyone to die since. She'd survive. No, she'd win.

A horn blared, echoing through the tunnels beneath the stadium.

Iyana reached out and gave her fingers a squeeze. "Go prove yourself a goddess fit to be worshipped."

Galene gave a single nod, then turned, crossed the preparation room, and stepped through the door into the dark passage.

Torches lit the limestone walls, a rich, earthy breeze guiding her toward open air. She passed a small group wearing tunics embroidered with Apollo's laurel-healers waiting to see how the battle would end. Galene kept her eyes ahead, focusing on the beat of her sandals hitting the floor to lull her frantic mind.

The tunnel brightened as an archway of light came into view. A steady hum echoed down the tunnel, growing continuously louder.

Her heart banged against her rib cage. Every cruel word, every suspicious and disapproving glance she'd received over the last three years crashed through her mind. This was the day she'd overcome it all. She'd sketched plans for the temple that would be built for her, spent nights awake at the prospect of introducing herself to the humans. She'd dreamt of the day her father would look at her and see her, and not the shame of her brother.

I will walk off that battlefield a victor.

She crossed into the stadium.

The crowd erupted into a roar, and Galene blinked in the sunlight.

The massive amphitheater stretched one hundred and fifty feet wide and twice as long. A wall encircled the dirt grounds, and above it, packed stands rose into the sky, a mosaic of dully colored tunics with spots of shining armor. It roiled as the crowd rose and fell, waving arms and cheering. Every god on Mount Olympus must have been there, along with visiting gods and goddesses who'd turned up for the event.

The sound was deafening, exhilarating. Jeers mingled with the revelry, but Galene ignored those. She pulled back her shoulders and lifted her chin, turning to find the small section of her fellow Unnamed-the young gods and goddesses who were still mortal. Iyana would take her seat there soon. She raised her hand toward them in acknowledgment.

In the front rows of the stands closest to her, on elevated seats, were the most powerful of all the gods: the Twelve Olympians. The rulers of both Mount Olympus and the humans below.

They watched her, glowing with power, the only silent spectators. Four decks of cards sat on a table before them, glowing like the Olympians themselves.

The Decks of Fates.

Despite the clear sky, a crack of thunder echoed throughout the stadium.

The crowd hushed instantly, and the King of Olympus, God of the Sky, stood. Above his trimmed, dark beard, Zeus's storm-gray eyes scanned the crowd.

"Six months ago, the council of the Twelve Olympians enacted a new requirement: Poseidon's children and my own are to take their Immortality Trials three years early, at the age of eighteen." Zeus did not shout, but his words carried clearly to all listening. "With the powerful gifts bestowed upon our children, they are fit for this greater challenge." He fixed his eyes on Galene. She inclined her head in deference. "Galene Unnamed is the first to face this new requirement. Today she will prove whether she is worthy to join the pantheon."

The crowd cheered once more, and chills raced down Galene's arms. She was ready-this was an opportunity. The Fates were giving her a chance to prove herself.

Zeus nodded, unsurprised, then turned to Poseidon. "If you will."

Galene's father stood. The Earth-shaker, God of the Seas, was tall like his brother, but not as broad. His long hair and beard were dark gray and unkempt, and a wild spark kindled in the sea-green eyes Galene had inherited. He looked at her only for a moment, offering barely a nod before turning away. She steeled herself.

Poseidon raised his arms, and the ground shook.

Widening her stance, Galene looked down. The dirt fractured, creating a circle around her a few paces in diameter. Cracks shot outward, webbing across the arena floor to break up the smooth, packed dirt. Clumps and boulders of loose earth trembled beneath Poseidon's power, then tumbled downward into the gaping fissures.

Piece by piece the arena floor fell away, crumbling until Galene stood on a pinnacle, staring into an abyssal pit. Her stomach lurched at her sudden height, but Poseidon was not done. Through the rubble far below, water rose. It sloshed over the rocks and boulders, climbing rapidly until it surrounded Galene, leaving only a short drop between her and its settling surface.

She looked back to the Olympians. Her father's face was grim as he retook his seat.

"Now let the Fates choose your opponent." Zeus flicked his hand, and one of the Decks of Fates scattered forward, as though blown by the wind. Tumbling through the air, the golden cards spun toward Galene, slowing as they approached. Most of the deck came to a stop, hanging in the air like leaves on an invisible tree. Five cards, however, came closer, aligning themselves at Galene's eye level.

Galene reached up and hesitated. Don't overthink it. She touched two on the left and one beside the far right. They glowed brighter, hanging there until all the other cards drew back, returning to a neat pile on the table.

The gold coating on the first card dissolved to reveal an image and printed words.

It depicted a whale-like sea creature with a gaping mouth lined with rows of long teeth.

Body of Cetus, the card read.

Galene swallowed. She had expected one of the cards to be monstrous-at least now she'd gotten the worst out of the way.

She turned to the second. Its golden coat, too, disappeared.

A giant gryphon was emblazoned on it, the fur and feathers shining with gold.

She blinked in shock. The King of the Gryphons' eagle-and-lion hide was like armor, nearly impenetrable. This card was as bad as the first-drawing blood would be formidable, let alone killing whatever hybrid creature these cards would create.

Turning to the third and final card, Galene sent a silent prayer to the Fates. Please be something to balance these out-sight of a cyclops or something.

The gold disappeared, and she felt the ichor drain from her cheeks.

Galene looked between them again. She had to have misread them-there had to be a mistake. But no: Body of Cetus, Hide of the Gryphiekin, Heads of Scylla. Each individual card could change any two basic creature qualities into a deadly beast, but all three together .

She clenched her fists, digging her nails into her palms. This six-headed monster would be huge, smart, and nearly impossible to wound. I don't know if I can do this. Her legs trembled, and she hoped the Olympians couldn't tell.

The cards flew back, presenting themselves to the Twelve. Behind them, gods and goddesses leaned forward to get a look at the cards. Shocked murmurs rose, rippling around Galene as the word of her opponent was passed around the stadium.

Excitement began to vibrate through the crowd, people realizing that if nothing else, they were about to get a show. There had never been three creatures of this caliber combined for an Immortality Trial.

She looked to her father. His mouth was a thin, pressed line. The other Olympians didn't look at all fazed-some merely sat forward to watch her more closely, disdain in their eyes.


Copyright c 2021 by Talia Rothschild and A. C. Harvey