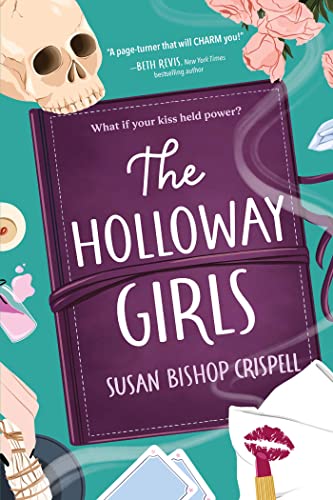 "The Holloway Girls is about the power of a kiss—and the power of forgiveness, of siblings, of friendship, and, above all, of love. All wrapped up in a curse and woven through with magic. A page-turner that will charm you!" —Beth Revis, New York Times bestselling author

When your kiss is good luck, the wrong kiss could change everything...

During the kissing season, one kiss from Remy or her older sister Maggie will give the boy—or girl—good luck. Or so it has been for all the Holloway girls before. But this year, Remy's first season, she doesn't follow the rules, dooming the boy she kisses to bad luck that almost kills him and leaving Remy with a cursed kissing season.

Now Remy is adamant about keeping her lips to herself. But the new boy in town is making it hard to keep her promise. Especially because he seems to really want to get to know her, and isn't just using her for the Holloway luck. But before she can even think about kissing someone else, she'll have to find a way to fix the curse, or else her family's legacy will be tainted forever.

The Book of Luck

As a Holloway girl, this book is your legacy. It holds your histories, your love stories, and your magic. By adding your name to its pages, you agree to follow the rules, binding all the names herein—both Holloway girls and those you choose to kiss—to the luck of the kissing season.

Your kissing season will begin with the summer solstice that follows your sixteenth birthday. For that year, everyone you kiss will be granted a stroke of good luck when it is most beneficial to them. It may manifest within a day, a week, or many years later. That is for the magic to decide. As long as their name is recorded in the book, the luck will find them.

In return for gifting good luck to others, your life will be charmed with true love and your own sprinkling of good luck for the rest of your days.

• Your magic will affect the hearts of those around you who already feel affection for you.

• Both you and the person you kiss must do so willingly. • Never kiss someone who’s already in love with another.

A Quick Tangle of Lips and Breaths

Nothing holds more potential than a blank page. Especially a page from the Book of Luck. The leather-bound notebook is a family heirloom. It chronicles the name of every Holloway girl and a short account of the luck their magic has bestowed on the people they’ve kissed.

After being raised on stories of other Holloway girls, it’s finally my turn to start writing my own. It’s a rite of passage. But also, it’s something I’ve looked forward to my whole life. And with a few quick strokes, I sign my name across the top of the paper, binding myself to the magic of the kissing season.

My great-great-great-times-infinity grandmother was the first Holloway girl to experience the season. With just one little kiss, she gave some love-struck boy a gift of good luck. And just like that, all the women in my family were imbued with magic.

Before the ink’s even dry, I can feel the magic claiming me for the coming year. It’s a lightness in my chest, a buzzing in my blood. A promise that the charmed future I’ve always dreamed of—one with true love and a faint luster of luck clinging to my skin like glitter—is just one kiss away.

My season doesn’t officially start for five and a half more hours. But there’s no way I’d be able to sleep, despite it being almost midnight, if I didn’t do this first. I do my best attempt at a happy dance with my sister, Maggie, squeezed onto my twin bed, hugging me from behind. It’s basically off-kilter bouncing accompanied by jazz hands. But it serves its purpose.

“You’re going to have so many boys lining up to kiss you that you won’t be able to get their names on the page fast enough.” She squeezes me tight, as if she doesn’t mind that her season ends tomorrow when mine begins.

Which, to be fair, she probably doesn’t. My sister’s kissed more boys in the past year than I’ll probably kiss in my lifetime.

Maggie subscribes to the kiss-any-boy-who-strikes-her-fancy philosophy. It’s what all the boys hope for during the kissing season—equal opportunity and all that—but also Maggie just really enjoys kissing. I, on the other hand, lean toward a different school of thought. When I kiss someone this year, I want to know it means something. For both of us.

“Let’s not go wild, Mags.” I nudge an elbow into her ribs, eliciting a laugh. “I’d be happy with just one who wants to be with me more than he wants the luck.”

Holloway girls have zero control over who falls for us during the season. But if I could choose, that someone would be Isaac Fuller. I can’t even think his name without a smile curving onto my lips. It’s like a flashing neon sign that says kiss me every damn time I see him. If things go my way, I might get him to do just that.

Isaac and I aren’t friends, exactly, but we’re friendly thanks to a few mutual classes and a few more mutual friends. Our lockers are practically next to each other—just three people between us—and somehow last year we’d gotten into this ritual of Isaac knocking on my locker door as he passed every morning before first period and saying, There she is, and me replying Here I am, and him saying, Now my day can begin. He had a girlfriend then, so he didn’t mean anything by it. But that hadn’t stopped my heart from tripping all over itself every day. When he broke up with Hannah at the end of the school year, I’d finally let myself hope that maybe our morning ritual had started to mean something more to him too.

Reaching for the book, Maggie flips the cover closed. Then she falls back onto the mattress, taking me down with her. She presses our foreheads together, her eyelashes whispering against mine, as if the contact will give her direct access to my thoughts. This close, the light smattering of freckles high on her cheeks makes an appearance, as opposed to mine, which are dark and abundant and cover both cheeks down to the curve of my jaw and up the bridge of my nose.

Tucking a hand under her jaw to protect my pillowcase from her raspberry-colored lip stain, aptly named Girl About Town, she says, “I get that the season makes it hard to know which feelings are real and which are fueled by a desire for the luck. Just remember that kissing people you have true feelings for trumps all.”

It’s a version of something Mom has said to us our whole lives. Like a Holloway motto. If we had a family crest it would be the cheesiest one around: True love trumps all.

I want to tell Maggie about Isaac. How I want to kiss him and no one else. But I know my sister—almost better than I know myself—and I’m not in the mood for a lecture about the rules and how I can’t kiss Isaac if he’s still in love with Hannah. So I just say, “That’s the plan,” and smile like I haven’t already narrowed my choices down to one.

Nana always said kissing someone who’s already given away their heart was one of the worst sins against the season, right up there with refusing to kiss anyone at all. But there’s nothing in the Book of Luck

about what happens if a Holloway girl breaks the rules. I can only remember hearing one or two stories about girls in my family who never found love. And even then, those were just whispers.

I push the worry away, refusing to let it spoil this milestone moment. As long as Isaac’s pulled under the season’s spell tomorrow, that means his feelings for me are real. And there’s nothing to stop me from kissing him the first chance I get.

There’s a piece of paper taped to my bedroom window when we wake, both still in my bed. Maggie—ever vigilant where I’m concerned—spots it before me and falls out of bed, her foot tangling in the sheets in her haste to see what it says. Pressing the back of one hand to my mouth to stifle my laughter, I extend the other to help her off the floor. She glares at me, but our fingers twine together as we examine the message facing us through the glass. The paper’s been torn from a spiral notebook, the edges ripped and uneven. The words, written in a messy scrawl that slants down to the right despite the paper’s faint blue lines, read: Making you smile is the best part of my day.

It’s not exactly a love letter, but it’s as close to one as I’ve ever gotten. Usually, Maggie’s the one garnering all the attention—even before her kissing season started. Knowing that someone’s choosing me over my sister for once is a serious hit of serotonin. I run my fingers over the glass, tracing the outline of the words one at a time.

“Who’s it from?” Maggie leans closer, trying to locate a signature. “And how did he get it up here without us hearing him?”

“I don’t know.” But I do. I’ve seen hundreds of these types of love notes on Hannah’s locker over the years. They were Isaac’s way of letting her—and everyone who walked by—know that she had his heart. Maybe this is his way of saying that I do now.

“It’s really sweet. And also accurate. Whoever he is, he should definitely be on your list.”

“Why does there have to be a list? What if I like him?” I don’t mean to ask it, but my heart refuses to comply.

She lifts our joined hands and taps on my chest like she can knock some sense into my heart. “It’s called the kissing season for a reason, Rem. If we were supposed to kiss just one person, it wouldn’t last all year. Or the magic would only work on one person.”

“Yeah, but there’s no rule that says we have to kiss more than one. Just that we can if we want to.” Sliding the window open, I reach up to dislodge the tape. The paper flaps in the wind when I free it, almost ripping from my hold like it wants to blow away and spread its message all over town. I slip the note into the top drawer of my nightstand so Maggie doesn’t sense how much it means to me.“  Oh, you’ll want to,” she insists. “Just give the season time to work its magic, and you’ll see.”