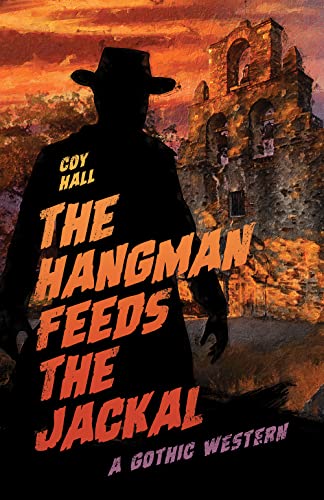 Elijah Valero is a gunfighter afflicted with terrifying hallucinations, including a pervasive one of The Hangman out to kill him.

Dogged by the relentless specter of the Hangman, Valero mistakenly kills innocent victims and is forced to hide in an abandoned monastery for his own safety and for those of others. Once there, he encounters far greater dangers than the imaginary Hangman, and gains a bid for redemption as he faces down some silver-hungry drifters out to terrorize a town for its riches. Fans of the Weird West and Gothic Horror will find satisfaction in THE HANGMAN FEEDS THE JACKAL.

The forest was full of aber-rations that night.
When he inched closer to the fissure, his skin touched cool stone, and the contact brought him back to reali-ty He was dreaming with eyes open again. Elijah Valero shook his head and breathed deeply. Nausea moved through him. He'd watched the road since the first light of morning, he realized.

Through a gash in the wall, the forest road was visi-ble for some distance. The opening was more arrow slit than window, no more than four inches wide at its largest and a hairline at its narrowest, so

Valero saw without being seen. The gash was one of many holes in the surrounding walls. Nature worked to reclaim the monastery. The stones were eroding, the wood rotting. Valero had lost track of time weeks prior. He'd nearly starved himself. His arms were like stray bones in the darkness.

Shame. Shame is good, he reminded. Shame is a dash of clarity.

Still, Valero was compelled to remain and watch. He put his eye to the stone again, appreciating the cleverness of his high perch. Although moonlight was faint, he saw for some distance past the crumbling front walls of the garden. The dirt trace, which meandered downward through a pine grove, had been empty since dawn save for a lone coyote that used the road for a hundred yards and wandered into the brush again. Judged by the invasive trees and bramble that flanked the edge and grass that erupted in strips across its width, the path hadn't been used with regularity since Spanish missionaries controlled the region. That was a century prior.

Hills with long valleys stretched in every direction. The red cedars were tall and virginal. Black soil and a mulch of dead leaves covered the hillside. Creatures trampled through the undergrowth each morning, leaving their musk in the air. When the sun was up and the sky was clear, mountains were visible in the distance.

Amid all this stood the monastery, appearing as though the mins had sprouted like chipped teeth from the hilltop, ensnared by vines.

Civilization kept its distance. At night, despite the chorus of crickets, owls, and nighthawks, the rush of the Kinnikinnick River a mile to the west was audible. Such was the lack of men and their chatter. On clear mornings, the train that passed through Bone-of-Wellington, two hours southward, could be heard. The locomotive ran every two weeks.

Buried in the foothills of the Klamath Mountains, this was a thoroughly desolate corner of the world. A feminine voice entered Valero's mind. The voice arrived with such clarity that it sounded as though a woman stood at his side, whispering. Don't become complacent, she warned. He turned, looking for her in the darkness. Valero's pride sank. She was monitoring him. Not even his thoughts were private. She urged Valero to maintain his vigil. Her voice broke into layers—a rush of noise that reached a crescendo and then ebbed to a whisper.

Valero was accustomed to her warnings. The Spider (he labeled the voice by the only form he witnessed it assume) was persistent of late. She insisted on Valero's attention. She enraptured him, ravaged him, promised him, and threatened him. She'd left him in this shell to watch the road. He grew tired of her, but, then again, when had he welcomed her presence? The Spider invaded. There was no other way to phrase it. It was not a question of belonging or love. She occupied Valero when she saw fit. She was a sickness. A swell of guilt bruised Valero. You should thank her, he thought, not admonish her

At her core, the Spider tried to protect him. Was she overprotective? Perhaps, yes, but when he was unsure of his instinct, she became his intuition. Watch, she said. As if an invisible hand guided his chin, Valero retumed to the gash in the wall. She reminded Valero that, no matter his effort to flee and hide, he could never be alone for long, not even in this cornerof the world. Watch and listen. Keep your vigil. Elijah Valero was a hounded man, after all. He'd die that way. She knew this as well as he, but, like a motil-e; she pitied him. She prolonged his existence out of charity. The Spider was wise. She was right more often than wrong. To Valero's astonishment, a figure moved in the darkness outside. A man, with a violent struggle through the bramble that was heard before seen, rewarded Valero's faith. Valero shifted his gaze, searching. Through a break in the pines, a grey man appeared. The Spidercorrect, but the realization brought Valero no delight.  Terror moved through him. The man moved up the trail, making no effort to be silent. He thrashed loudly through tufts of switchgrass mockery of Valero's concealment. Arrogantly, he walked without a horse, without any possessions at all. He wandered upward like a spirit from the valley. He comes for one purpose, the Spider said. The man gripped a stick, with which he beat back the grass, reaping weeds as he came forward. The grass swished with his advance. He had the look of a vagrant, but a benign appearance wouldn't disarm Valero. In the final stretch before the front gate, the trail was an uphill slog. Once the grey man emerged from the tree line, he stopped for a breather, doubling at the waist. He wiped sweat from his face and neck. The night was muggy. Seized, the man coughed. He hacked for a full minute. He spat shredded lungs on the ground. The grey man cut a sorry figure. Even from this dis-tance, Valero saw the multitude of scabs on the moor Flesh. The clothes he wore looked like rags purloined from a grave. Around his neck he wore a threadbare scarf. On his feet were rotten, ill-fitting boots. He wore no hat to shade the blistered, scabbing face. He had restless, twitching hands that were jaundiced and abnormally long. The Hangman, the Spider observed. Do you recognize his specter? So it was.

No matter the shape he assumed or the air he affect-ed, the Hangman remained the same. He disarmed first, and then he killed. He beguiled, and then he struck Of course, she said he'll try to fool you with his appear-ance. He's done to before. Remember the child? He did. Valero's shame retreated beneath the Spi-der's growing shadow. She had pride even if he did not. Remember the widow? Remember the soldier?He, too, in grey? Be caref Id lest he beguile you. Valero agreed. It was the Hangman come again. After shrinking back from the fissure, Valero groped in the dark for his satchel. Finding the worn leather case, he reached inside and retrieved a Colt Navy, heavy with six bullets. The grey man moved forward. He sweated profusely. He was a slight man, underfed, grizzled.

Walking bones, Valero thought. An empty shape sewn together sloppily. It was as if his body, too, had been filched from graves. A phantasm, the Spider said. When the grey man passed through the curtain wall, a large entryway shored with pillars of wood, he reached the gardens of the monastery. Here, where once there was an artwork of flowers corniced with decorative stone, squirmed reams of briar, weed, and switchgrass. Paint on the stones had faded, save for smudges of burgundy.

The Hangman looked in awe H the towering ruins. Valero's ingenuity struck him. Valero's heart thudded The Hangman's eyes stopped on the second story fissure. His gaze lingered there. The Hangman whistled in admiration. Despite a century of abandonment, the great building impressed him. The monastery Hood black against the sky. Cloaked in the cell's darkness, Valero clicked the revolver's hammer into place. The cylinder rotated.

The aroma of gun oil came to him. The sensation com-forted him. You're worthless, themercurial Spider nagged He heard the gun. He smelled the oil. He looked past you, but he saw your hiding place. Watch his eye linger—Watc1z. He knows you're here. Why else would he have come? How dare you make such a racket? Upon the wall, a black spider scuttled The creature had no web, and it hadn't been present moments pri-or. Valero's breath caught. The Spider materialized from the rocklike condensation. Voice became flesh. As Valero watched, the Spider grew. First to the size of a dime and then to the width of a silver dollar. The legs stretched, then the body bloated into proper proportion.

It was a sight of wonder. Keep watching the garden, she admonished. You see? He's gone. You lost him. He could be anywhere. He could he in this mom. He could be.... She stopped then. Indeed, the Hangman had gone from the garden. Save for a breeze that cooled the sweat on Valero's face and swayed the treetops, the forest did not move. The road stood empty. The Hangman had not retreated down the path. He's inside, Valero thought. The Hangman's proximity disturbed Valero.

For a moment, he was an eight-year-old boy again, looking at the unmoving form of his mother while cowering in the shadow of the Hangman. Valero breathed in, blunting the edge of his terror. Finally, after checking the cell, Valero stood. The bones of his legs creaked. He winced at the noise. After a look at the Spider, crawling with quizzical patience atop his satchel, Valero crept toward a doorway. The cell in which he practiced his watch was small and confined, a pocket of stone and no more.

The corridor into which the door opened was more expansive, stretching twenty feet across and reaching to the high, vaulted ceiling. Any decoration for the hall was long plundered. The space was bare and musty, and it reeked of rat feces and mine. Moss grew on the plank floor. Vines penetrated the ceiling. The air was thick and still. It remained darker here, with only a few shafts of moonlight lancing the rotten wood above. light silvered the floor here and there, and where it did rats were visible.

Rodents crossed the planks with no interest in Valero or the Hangman. Their only worry was a homed owl perched on a rafter. As Valero moved through the darkness, he thought once more of his mother. He thought of the Hangman kneeling in from of him atop creek stones.

The man gripped a noose. There she was on the road, her naked feet, blackened and hard. Her body was like snow. The memory strengthened Valero's rage. He lifted the Colt Navy and moved towards the stairwell.