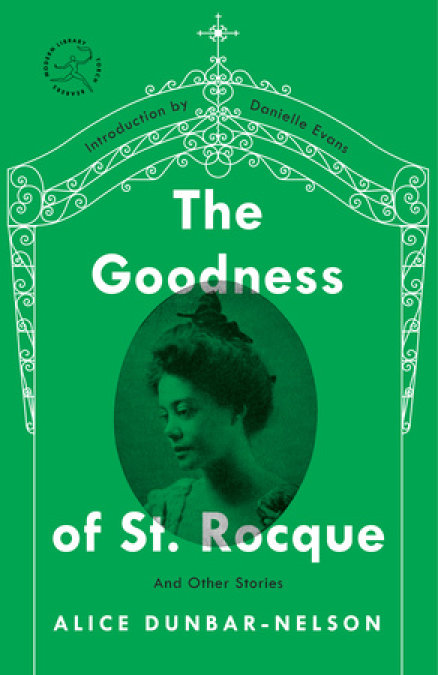 A stunning short story collection that takes the reader into the heart of the Creole community in late-nineteenth-century New Orleans, from a key poet and journalist of the Harlem Renaissance—featuring an introduction by Danielle Evans, the award-winning author of The Office of Historical Corrections

This vivid collection transports readers to New Orleans, from the delights of Mardi Gras on Bourbon Street, to the quiet Bayou where lovers meet, and to fish fries on the shore of the Mississippi Sound. Alice Dunbar-Nelson focuses the struggles and joys of the Creole community in these intimate stories featuring unforgettable characters.

In the title story, Manuela goes to the Wizened One for a charm when her lover strays; in “Little Miss Sophie,” a young woman goes to extreme lengths to get back a ring she pawned; in “M’sieu Fortier’s Violin,” a talented musician finds himself at a loss when his greatest passion is taken away; and in “The Fisherman of Pass Christian,” Annette, an aspiring opera singer, falls in love with a beautiful fisherman who has a secret. Together these stories provide a unique window into the world of everyday Creole Louisianians.

This edition also features a selection of stories from Dunbar-Nelson’s first collection, Violets and Other Tales, which beautifully compliments The Goodness of St. Rocque, making it the essential text for readers looking to discover this underappreciated writer.

The Modern Library Torchbearers series features women who wrote on their own terms, with boldness, creativity, and a spirit of resistance.

Manuela was tall and slender and graceful, and once you knew her the lithe form could never be mistaken. She walked with the easy spring that comes from a perfectly arched foot. To-day she swept swiftly down Marais Street, casting a quick glance here and there from under her heavy veil as if she feared she was being followed. If you had peered under the veil, you would have seen that Manuela’s dark eyes were swollen and discoloured about the lids, as though they had known a sleepless, tearful night.

There had been a picnic the day before, and as merry a crowd of giddy, chattering Creole girls and boys as ever you could see boarded the ramshackle dummy-train that puffed its way wheezily out wide Elysian Fields Street, around the lily-covered bayous, to Milneburg-on-the-Lake. Now, a picnic at Milneburg is a thing to be remembered for ever. One charters a rickety-looking, weather-beaten dancing-pavilion, built over the water, and after storing the children—for your true Creole never leaves the small folks at home—​and the baskets and mothers downstairs, the young folks go up-stairs and dance to the tune of the best band you ever heard. For what can equal the music of a violin, a guitar, a cornet, and a bass viol to trip the quadrille to at a picnic?

Then one can fish in the lake and go bathing under the prim bath-houses, so severely separated sexually, and go rowing on the lake in a trim boat, followed by the shrill warnings of anxious mamans. And in the evening one comes home, hat crowned with cool gray Spanish moss, hands burdened with fantastic latanier baskets woven by the brown bayou boys, hand in hand with your dearest one, tired but happy.

Not that Manuela lacked partners or admirers. Dear no! she was too graceful and beautiful for that. There had been more than enough for her. But Manuela loved Theophilé, you see, and no one could take his place. Still, she had tossed her head and let her silvery laughter ring out in the dance, as though she were the happiest of mortals, and had tripped home with Henri, leaning on his arm, and looking up into his eyes as though she adored him.

This morning she showed the traces of a sleepless night and an aching heart as she walked down Marais Street. Across wide St. Rocque Avenue she hastened. “Two blocks to the river and one below—” she repeated to herself breathlessly. Then she stood on the corner gazing about her, until with a final summoning of a desperate courage she dived through a small wicket gate into a garden of weed-choked flowers.

There was a hoarse, rusty little bell on the gate that gave querulous tongue as she pushed it open. The house that sat back in the yard was little and old and weather-beaten. Its one-story frame had once been painted, but that was a memory remote and traditional. A straggling morning-glory strove to conceal its time-ravaged face. The little walk of broken bits of brick was reddened carefully, and the one little step was scrupulously yellow-washed, which denoted that the occupants were cleanly as well as religious.

Manuela’s timid knock was answered by a harsh “Entrez.”

It was a small sombre room within, with a bare yellow-washed floor and ragged curtains at the little window. In a corner was a diminutive altar draped with threadbare lace. The red glow of the taper lighted a cheap print of St. Joseph and a brazen crucifix. The human element in the room was furnished by a little, wizened yellow woman, who, black-robed, turbaned, and stern, sat before an uncertain table whereon were greasy cards.

Manuela paused, her eyes blinking at the semi-obscurity within. The Wizened One called in croaking tones:

Timidly Manuela sat at the table facing the owner of the voice.

“I want,” she began faintly; but the Mistress of the Cards understood: she had had much experience. The cards were shuffled in her long grimy talons and stacked before Manuela.

Breathlessly did Manuela learn that her lover was true, but “dat light gal, yaas, she mek’ nouvena in St. Rocque fo’ hees love.”

“I give you one lil’ charm, yaas,” said the Wizened One when the séance was over, and Manuela, all white and nervous, leaned back in the rickety chair. “I give you one lil’ charm fo’ to ween him back, yaas. You wear h’it ’roun’ you’ wais’, an’ he come back. Den you mek prayer at St. Rocque an’ burn can’le. Den you come back an’ tell me, yaas. Cinquante sous, ma’amzelle. Merci. Good luck go wid you.”

Readjusting her veil, Manuela passed out the little wicket gate, treading on air. Again the sun shone, and the breath of the swamps came as healthful sea-breeze unto her nostrils. She fairly flew in the direction of St. Rocque.

There were quite a number of persons entering the white gates of the cemetery, for this was Friday, when all those who wish good luck pray to the saint, and wash their steps promptly at twelve o’clock with a wondrous mixture to guard the house. Manuela bought a candle from the keeper of the little lodge at the entrance, and pausing one instant by the great sun-dial to see if the heavens and the hour were propitious, glided into the tiny chapel, dim and stifling with heavy air from myriad wish-candles blazing on the wide table before the altar-rail. She said her prayer and lighting her candle placed it with the others.

Mon Dieu! how brightly the sun seemed to shine now, she thought, pausing at the door on her way out. Her small finger-tips, still bedewed with holy water, rested caressingly on a gamin’s head. The ivy which enfolds the quaint chapel never seemed so green; the shrines which serve as the Way of the Cross never seemed so artistic; the baby graves, even, seemed cheerful.

Theophilé called Sunday. Manuela’s heart leaped. He had been spending his Sundays with Claralie. His stay was short and he was plainly bored. But Manuela knelt to thank the good St. Rocque that night, and fondled the charm about her slim waist. There came a box of bonbons during the week, with a decorative card all roses and fringe, from Theophilé; but being a Creole, and therefore superstitiously careful, and having been reared by a wise and experienced maman to mistrust the gifts of a recreant lover, Manuela quietly thrust bonbons, box, and card into the kitchen fire, and the Friday following placed the second candle of her nouvena in St. Rocque.

Those of Manuela’s friends who had watched with indignation Theophilé gallantly leading Claralie home from High Mass on Sundays, gasped with astonishment when the next Sunday, with his usual bow, the young man offered Manuela his arm as the worshippers filed out in step to the organ’s march. Claralie tossed her head as she crossed herself with holy water, and the pink in her cheeks was brighter than usual.

Manuela smiled a bright good-morning when she met Claralie in St. Rocque the next Friday. The little blonde blushed furiously, and Manuela rushed post-haste to the Wizened One to confer upon this new issue.

“H’it ees good,” said the dame, shaking her turbaned head. “She ees ’fraid, she will work, mais you’ charm, h’it weel beat her.”

And Manuela departed with radiant eyes.

Theophilé was not at Mass Sunday morning, and murderous glances flashed from Claralie to Manuela before the tinkling of the Host-Bell. Nor did Theophilé call at either house. Two hearts beat furiously at the sound of every passing footstep, and two minds wondered if the other were enjoying the beloved one’s smiles. Two pair of eyes, however, blue and black, smiled on others, and their owners laughed and seemed none the less happy. For your Creole girls are proud, and would die rather than let the world see their sorrows.

Monday evening Theophilé, the missing, showed his rather sheepish countenance in Manuela’s parlour, and explained that he, with some chosen spirits, had gone for a trip—“over the Lake.”

“I did not ask you where you were yesterday,” replied the girl, saucily.

Theophilé shrugged his shoulders and changed the conversation.