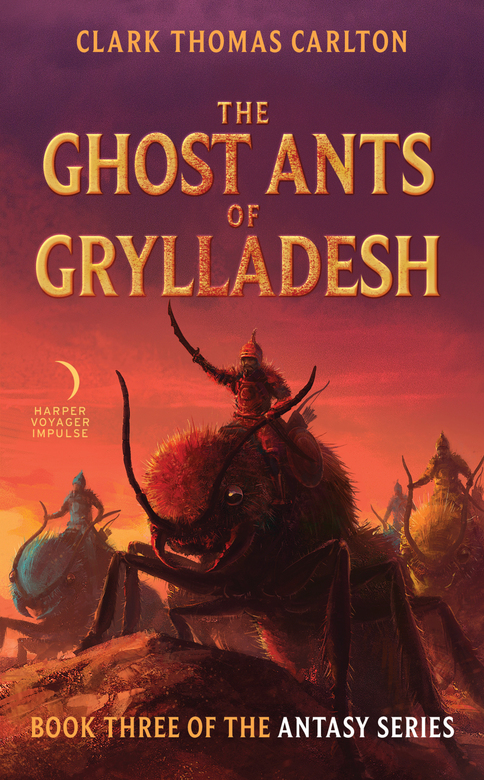 The Ghost Ants of Grylladesh

The Ghost Ants of Grylladesh is the final chapter of Clark Thomas Carlton's epic Antasy trilogy that started with Prophets of the Ghost Ants (a Kirkus Reviews Best of the Year pick) and Prophet of the Termite God, in which human and insect--and ancient magic--blend to tell a story of an empire in ruin, vicious and mysterious usurpers, and a young man who would be lead his people beyond everything they know in hopes of utopia.

In the Barley Lands to the East, the deformed and demented Emperor Volokop has blinded the hero Anand and sent him to Dranveria with a message for its rulers. But when Anand is captured by a mysterious people, the fate of his family and his new nation of Bee-Jor is suddenly in jeopardy.

Because Bee-Jor remains in chaos. In the South, starving refugees from Hulkren have overwhelmed Mound Palzhad and segregated into warring camps to fight for their very survival … with some  descending into cannibalism. Beyond them, the roach riders of The Promised Clearing threaten a new conflict in a quest for more land. And in the West, a new peril arises from the Velvet Ant League, one not seen in a thousand generations.

Aiding all of these enemies is the deluded Queen Trellana, who has gathered the royal women of the East to march out of Bee-Jor and leave it vulnerable to attack.

The founding of Bee-Jor was Anand’s dream of a perfect society, but without their leader, is that all it ever will be: a dream?