Burdened by debt after her husband's death, Lucy Muir insists on moving into the very cheap Gull Cottage in the quaint seaside village of Whitecliff, despite multiple warnings that the house is haunted. Upon discovering the rumors to be true, the young widow ends up forming a special companionship with the ghost of handsome former sea captain Daniel Gregg. Through the struggles of supporting her children, seeking out romance from the wrong places, and working to publish the captain's story as a book, Blood and Swash, Lucy finds in her secret relationship with Captain Gregg a comfort and blossoming love she never could have predicted.

Originally published in 1945, made into a movie in 1947, and later adapted into a television sitcom in 1968, this romantic tale explores how love can develop without boundaries, both in this life and beyond. 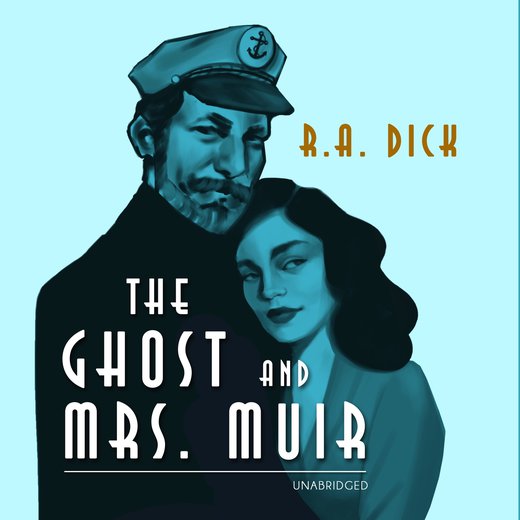 Excerpted from the Foreword


They had me at Lucia. You’ve heard of pregnant women craving ice cream,

burnt bacon, or green olives, but when I was expecting, I craved an old black-and-white movie from 1947 called The Ghost and Mrs. Muir.

Lucy Muir (the elegant Gene Tierney) is a young widow in the early 1900s with a daughter (nine-year-old Natalie Wood) she adores, living with her suffocating in-laws, who represent the oppression of the Victorian era. Fed up, Lucy takes her small annual stipend, only child, and faithful maid and leaves. She heads for the coast, where she finds a house called Gull Cottage in the village of Whitecliff-by-the-Sea. Evidently, it has stood vacant because it’s haunted by a Captain Gregg (played by Rex Harrison) who died there in a house fire.

Mr. Harrison was called “Sexy Rexy” in Old Hollywood for good reason. Apparition or not, in this picture, the actor earned every pant from the audience.

I fell into this movie like a spoon into a bowl of mint chip.

The Ghost and Mrs. Muir is based upon a lean Victorian novel by Josephine Leslie (who published under the name R. A. Dick in 1945 for fear of misogyny leading to no or low sales). The novel is a romantic ghost story, more novella than epic.

Philip Dunne, one of the great screenwriters during the Golden Age of Hollywood, adapted the novel for the screen. Mr. Dunne was a master dramatist, keen and spare in his process. He would take apart a novel, pulling threads from it like a lacemaker. Mr. Dunne would hold on to some characters, discard others, restructure timelines, winnow down scenes, remove some altogether, and add new ones to create the most powerful screen narrative from the source material. His dialogue is smart; at the time this was a necessary talent because so were the audiences.

His plots build with tension and surprise. (Another of Mr. Dunne’s brilliant screenplays is the adaptation of How Green Was My Valley, whereby he took a doorstopper of a novel and told the story in flashbacks from the point of view of the youngest son in a Welsh mining family to splendid results.)

Joseph L. Mankiewicz directed with style and sensitivity. But it’s the screenwriter who makes the movie soar, as Mr. Dunne crafted the script to be as much about the art of writing and creativity as he did romantic love.

Settings are always evocative and lush in a Dunne screenplay. The very British Gull Cottage built by Hollywood craftsmen was an ideal movie setting, as it invited the audience into the world of the characters. The cottage was set high on a sunny cliff overlooking the ocean, with mon- key puzzle trees in the yard, a big kitchen, massive windows, and a spacious master bedroom on the second floor with a terrace outfitted with a telescope to watch ships and stars. Okay, it was Malibu, but it looked like England through the lens of the great Charles Lang, who was nominated for the Academy Award for Best Cinematography for his work on this film.

I wasn’t surprised when I read Mr. Dunne’s autobiogra- phy, Take Two, where I learned that Mr. Dunne lived with his wife and daughters high on a cliff on the California coast overlooking the ocean much like Lucy Muir. If the movie felt personal, it’s because the screenwriter knew how to make the broad scenes intimate and the setting feel like home.

Mr. Dunne writes every character with specificity, no matter the size of the role. The crusty comebacks of the servant Martha (played by Edna Best) could have been considered throwaways, but in the hands of the accomplished screenwriter, they add texture and an au courant energy to the story. Every line packs a punch. Consider this exchange as the lady of the house climbs the stairs with her maid.


LUCY
You’ve lived a very useful life, Martha. I have nothing to show for all my years.

MARTHA
I suppose you call Miss Anna nothing.

LUCY
Oh heavens, I can’t take any credit for her.


I found myself watching the movie once a day through the final weeks of my pregnancy. I didn’t think there was anything odd about this until my mother arrived. She decamped to New York City to await the baby’s arrival with me, spending most afternoons watching the movie with me. At first, she indulged me, but by the time I went into labor, she had had her fill of the ghost, the cottage, and even Mrs. Muir—with one exception.

My maternal grandmother’s name was Lucia, and I knew that if I had a girl, my daughter would be named for her. Here’s an exchange from the movie that made me swoon and my mother cry.


CAPTAIN GREGG
You can call me Daniel.

LUCY
That’s very good of you.

CAPTAIN GREGG
And I shall call you Lucia.

LUCY
My name is Lucy.

CAPTAIN GREGG
It doesn’t do you justice, my dear. Women named Lucy are always being imposed upon. But Lucia—now there’s a name for an Amazon. For a queen.


My mother was misty because her Italian immigrant mother had to trade Lucia for the Americanized Lucy when she went to work in a factory in Hoboken. I cried because the deeper meaning of the name is from the Latin, meaning “light” (Muir is Gaelic for “the sea”). It might be all too thematically obvious—crossing oceans, surviving the crossing of a wild and unpredictable sea for a better life, but not to us. Lucy Muir, like so many women before her and since, including my grandmother, had to support their families, to make money to pay the rent. It seemed like a message.

When Lucy loses her small stipend, the captain suggests she write his life story as a novel—and offers that Lucy might live on the residuals, thus gaining her financial inde- pendence. Lucy is uncertain, but soon she pushes through her fear, and the captain dictates his memoir Blood and Swash, his life story, loaded with grit, daring, violence, and sex. Lucy types his story with a vengeance, kicking her old Victorian reticence to the curb, replacing it with the self- confidence of a writer who finds her industrious twentieth- century ambition.

Lucy engages her subconscious mind to write the novel. Lucy is the writer, but Captain Gregg is her muse. Captain Gregg isn’t just a ghost or a collaborator; it turns out that he is Lucy’s highest dream—the dream that will save her.

When Lucy takes the train into London to sell her novel to a publisher, the process is dramatized with authenticity. Mr. Dunne knows firsthand the reality of the working writer who has to sell a manuscript in order to provide for his family.

When Lucy falls prey to a parlor snake, fellow author Miles Fairley (played by the predatory George Sanders), we hope she can find earthly happiness. Even Captain Gregg roots for her, telling her that he was nothing but a dream and disappearing from her life. When Mr. Fairley breaks Lucy’s heart, she wonders if anything she has ever felt or known was real.

I won’t ruin the end of the movie for you, as it is the best in the genre of romance and fantasy. I will tell you that The Ghost and Mrs. Muir will always hold a special place in our viewing library at home.

Our daughter, Lucia, is now eleven years old, and like Anna Muir, she lives in an old house with a mother who writes books. We don’t have a telescope or an ocean view or even an apparition, but we love a good story, and I imagine that’s why we’ll always return to Gull Cottage and The Ghost and Mrs. Muir.

Adriana Trigiani is the New York Times bestselling author of sixteen books, including the blockbuster The Shoemaker’s Wife. She wrote and directed the big-screen version of her debut novel, Big Stone Gap, shot entirely on location in her hometown, to be released in 2015. She lives with her husband and daughter in Greenwich Village in New York City.