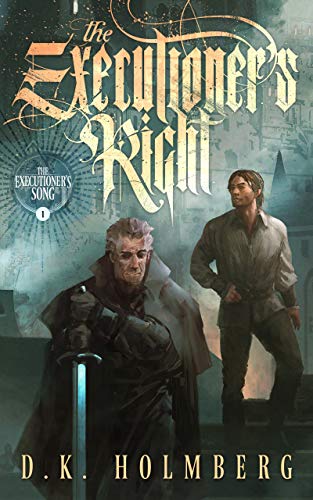 Executioners don’t solve crimes, they punish those who commit them. Or so Finn thought before apprenticed to one.

Poverty-stricken Finn Jagger would give anything to heal his ailing mother. With his father imprisoned, Finn has joined a thieving crew to earn the money he needs to save her. When the latest heist turns to disaster and lands him on death row, Finn’s future seems to be tied up with a noose. Until the king’s executioner claims him as an apprentice.

Finn soon learns an Executioner has far more power and greater responsibility than he’d ever realized. As inquisitor and detective, he must find the truth behind each sentence he carries out. It’s a challenging job, but one that Finn is surprisingly good at.

When the crew decides Finn could be the key to completing an impossible heist that threatens the kingdom, he’s forced to choose between his new job and his old friends. And making the wrong choice could cost him everything.

The house reeked of money. It was more than just the ornate sculptures that littered the entryway of the home, reflecting off the gleaming marble, and set into the alcoves. There was something about the air itself that stunk, a musty odor of age. Finn grinned to himself.

“Stop smirking and get to work,” Oscar said.

“You realize that we could take pretty much anything here and sell it for a profit,” Finn said, stopping before a small sculpture set into one of the alcoves on the wall. It looked to be modeled after one of the gods, though not one that he celebrated. Maybe Fell, as he appreciated wealth. “I should just grab—”

“You don’t grab anything. That’s not the job. The Client only wanted a specific item. Now get looking.”

Finn looked at the old thief and ran his hand through his shaggy brown hair. “Is this what it was like when you did jobs with my father?”

“When I did a job with your father, he didn’t talk so much,” Oscar said.

Oscar darted inside the room. Finn wasn’t going to be much help here. He didn’t even know the target. Oscar had agreed for him to come along on the job, mostly so that he had some experience. Oscar had always been the one advocating for Finn to progress with the crew.

Through the closed door, Finn could make out the din of the Gallows Festival. They were far enough off the procession that they didn’t have to fear the Blood Court would make an appearance, but near enough that they had to dress in their finery, rather than the typical thieves’ darks.

“Is this what all rich people’s homes look like?” he muttered, shifting his attention back to the inside, shaking his head. “Can you imagine what it must be like having this kind of money?”

Oscar worked along the shelves, going quickly. The man known as the Hand had a practiced approach and had no difficulty searching. “Every day.”

He stood up on his toes, picked a lock for a glass case, then grabbed what looked to be a bowl set apart from everything else on a high shelf, holding it up, and then stuffed it into a pocket.

“Are you kidding me? That’s what we were after?” Finn asked.

“We do the job we were hired to do,” Oscar said.

Oscar darted to the window, pulling the curtain back. Finn stepped up behind him, looking over his shoulder.

“Not a damn thing with you breathing over my shoulder,” Oscar said.

Rock was their scout today, keeping watch for anything unusual. Like Archers patrolling along the street that might indicate they’d been spotted.

“What if someone is home?” Finn asked quietly, looking toward the main hall. Shadows seemed to move, though Finn wondered if that was just his imagination.

“You were watching, weren’t you?” Oscar asked, and Finn nodded. “And you said it yourself. No one is going to be here during the festival.”

Finn hurried out of the room, down the hall, and stopped at the windows alongside the door. He peered out along the street.

They were in one of the nicest parts of the city. Not only were there shops found here that weren’t found in other places in the city—jewelers and seamstresses and artists, among others—but Heshian Palace, the king’s residence when he came to the city and supposed home to the crown jewels, was visible just in the distance.

“See anything?” Oscar asked, standing on the opposite side of the door, looking out of another window.

“No Archers, if that’s what I’m supposed to be looking for,” Finn said. The city guards would be just as busy as anyone on a day like this. “Maybe Rock was just… Damn,” he said. He pointed to the far end of the street.

An Archer dressed in the distinctive maroon and black colors of their office marched along the street. He rested his hand on a short sword strapped to his waist, and the shield on his back gave him an air of authority.

“They shouldn’t be here,” Finn said, recognizing the stripe on the man’s shoulders. A second stripe would indicate command within the palace; a third would mean command of the city. Even a single striped Archer could be deadly.

“It’s because we’re close to the palace,” Oscar said.

“Aren’t they supposed to guard the crown jewels?”

Oscar shot him a look filled with annoyance. “Don’t go getting ideas in your head.”

“What ideas are those?”

He shook his head slightly, turning back to the window. “The same kind of ideas your father liked to go on about.”

Finn laughed. He and his father shared many traits. The same average build, though Finn liked to think he was more muscular than his father ever had been. Definitely more than Oscar. A good height, even if it wasn’t nearly as tall as the Hand.

“I didn’t know that he thought to go after the jewels,” Finn said.

His father and Oscar had pulled jobs for a few years before he’d ended up pinched and imprisoned. Oscar never liked to talk about what kind of jobs they had taken and certainly didn’t like to talk about what had happened to his father. No thief wanted to contemplate the possible consequences of the job.

“Not like that. Just looking for the big score. Never content with what was dealt before them.”

“Aren’t you the Hand? Shouldn’t you be the one in charge of what’s dealt before you?”

Oscar waited until the Archers slipped along the road, disappearing. “You’ve got to be content with what you have, Finn. Otherwise you’re always going to be looking for a more dangerous job.”

A shuffling sound behind him caught Finn’s attention.

He spun, looking into the darkened house, frowning.

“Are you sure this place was empty?” Finn asked.

“You watched it the same as me. We saw them head out to the festival.”

Finn had, and he and Rock scouted for the better part of two days, a long time for a job as simple as taking a single bowl. He thought they had seen everybody from the household leaving, everyone dressed as formally as possible for the festival.

He swung back around, looking toward the window. The palace Archer lingered out in the street, not moving away.

“Then we take the back way,” Oscar said, motioning for him.

They hurried along the hall, and as they passed through it, Finn grabbed a small, silver statue and stuffed it into his pocket. Near the back of the house, Oscar paused, raising his hand, and tipped his head to the side.

If there was somebody in the house, they’d been too loud.

They ducked through a doorway into an enormous kitchen. It looked like it could serve an entire tavern, and yet it was empty. The smell of the recent breakfast lingered, that of sausage and eggs and fresh breads. It was enough to make Finn’s mouth water, and his stomach rumbled.

“If we get trapped here…”