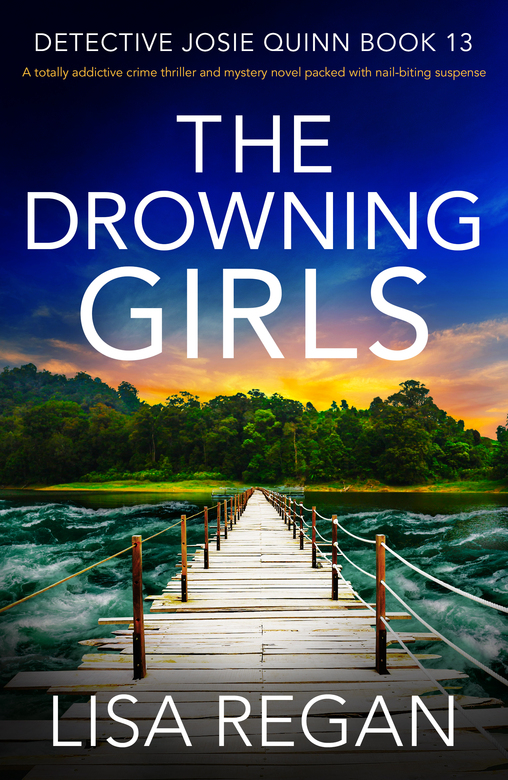 In the thin glow of moonlight, a mess of auburn curls gleams against the rocks. A girl’s pale hand reaches from a cleft in the boulders, waving weakly. But it’s too late. A wall of raging white water crashes down, swallowing her whole…

A knock on the door late in the evening can only mean trouble for Detective Josie Quinn, but fear chokes her at the news that one of her own team is missing. No one has seen Denton PD’s Press Liaison Amber for days and, as she follows the message scrawled on the frosted windscreen of Amber’s car to a nearby dam, Josie hears a piercing scream that tells her she’s too late. But the body they pull from the freezing water is not Amber…

Josie won’t sleep until she finds a name for the beautiful girl left to drown, and the meaning of the numbers scribbled in a tattered pink diary found on Amber’s desk. She must stay strong and focused for her close-knit team. But as rumors of an argument the night Amber disappeared surface, can she even trust her own colleagues?

Cracking the cryptic numbers reveals a twisted truth about Amber’s family – did anyone really know Amber at all? Finding her alive is Josie’s only chance of knowing the truth. But as a blizzard closes in, how many more precious lives will be snatched before she can?

Do you absolutely love crime thrillers that keep you up all night and leave you sleeping with the lights on? Then this gripping rollercoaster ride, perfect for fans of Angela Marsons, Robert Dugoni and Rachel Caine, will have you TOTALLY HOOKED!

Everyone is talking about Lisa Regan:

“BUCKLE UP… never-ending twists and turns. You think you know what to expect… and then BAM she hits youwith something so out of the blue thatyou can’t help but gasp.” Katie Mettner Books, 5 stars

“Absofrickenloutly amazing… fantastic start to finish… one of those books that you stay up way too late to read… pick up this book ASAP… be prepared to be hooked.” Goodreads reviewer, 5 stars

“Love…love…loved this book… fantastic… kept me guessing till the end… I could keep gushing.” Goodreads reviewer, 5 stars

“Brilliant… my goodness it’s a real belter of a read!… I just couldn’t put down… loved everything… not to be missed.” Goodreads reviewer, 5 stars

“I. Don’t. Know. How. She. Does. It… My heart pounded in my chest, my pulse raced, I shed some tears, and my hands shook… absolutely incredible…

Cold air stings her cheeks like a thousand tiny needles pricking at her skin. Dried leaves and twigs crunch under her feet. Several times, her feet slip in patches of snow that still linger on the ground. A heavy hand presses down on her shoulder, steering her through the darkness. The barrel of a gun knocks against the base of her skull and her scalp still burns from where he grabbed her hair, pulling until it started to tear from the roots. The rest of her body is numb with the cold. She wishes she had her coat.

“I’m freezing,” she says, wishing her voice didn’t sound so much like a whimper.

“Shut up,” he says. His fingers dig into the flesh just below her collarbone. The cold metal of the gun bites into her skin.

“Don’t need a coat where you’re going,” he says brusquely.

Where is she going? A shallow grave in the woods? The thought—no, the stark reality—that she is on her final march to death sends a juddering breath through her. Her teeth begin to chatter, from the cold or the panic building inside her with every step, she doesn’t know. How can he even tell where they are going? Everything around them is inky black. The moon is a smudge behind translucent clouds.

“You don’t have to do this,” she says, and this time she makes no attempt to hide the pleading in her tone.

“You made your choice,” he growls.

He pushes her violently and her legs go out from under her. Blackness rushes at her face, and her hands shoot out to break her fall. The sharp edge of a rock slices into the palm of her

left hand. Before she can react, his hand tangles in her hair again, lifting her. The gun is at her temple now, digging into her skin.

“Now,” comes the gravelly voice. “You’re going to give me what I want.”